The central bank released draft norms that seek to overhaul the rules governing how much banks can charge merchants for providing debit card services in order to make such transactions cheaper and more popular among smaller merchants.

The Reserve Bank of India has proposed to link the so-called merchant discount rate (MDR) to the annual revenue of the merchant, according to the draft norms released on Thursday. This marks a departure from the current flat MDR charged on all such transactions. 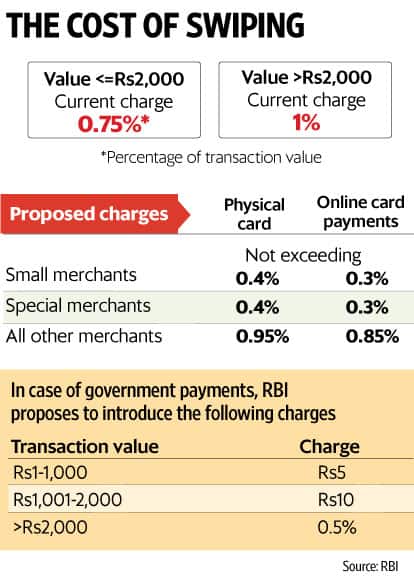 According to the proposed regulations, smaller merchants and special category would be charged an MDR not exceeding 0.4% on physical transactions at point of sale (PoS) or other types of terminals and a rate not exceeding 0.3% for online transactions.

RBI has requested comments from stakeholders by 28 February.

“MDR for debit cards for petrol/fuel shall be decided subsequently after the industry consultation process with oil ministry is completed," the regulator said in its draft guidelines.

“Card networks shall suitably revise the applicable interchange and network fees, preferably on percentage basis rather than any flat-fee basis. Banks shall also appropriately rationalise the monthly rentals, if any, recovered from the merchants taking into account the type of card acceptance infrastructure deployed at merchant location," said RBI.

Fuel companies and banks came to a head in January after the RBI withdrew the MDR holiday on all card transactions.

After 8 November, following demonetization, in order to make things easier for customers and to promote non-cash transactions, the government waived MDR on all card purchases for 50 days. With that promotional period lapsing, banks said they would reinstate the charge. The banks had said that they would recover the charge from fuel pump owners from 9 January, prompting dealers to threaten not to use card-swiping machines issued by some banks. That stalemate called for government intervention, leading to a status quo where banks and fuel companies agreed to split the charges equally.