New Delhi: The government has asked telecom operators and internet service providers to suggest ways to block social media apps such as Facebook and WhatsApp during emergencies, a move the industry says will be difficult to enforce and violate the fundamental right of speech and expression.

In an 18 July letter, the department of telecommunications (DoT) wrote to companies including Bharti Airtel Ltd, Reliance Jio Infocomm Ltd, Vodafone India Ltd, Idea Cellular Ltd, Bharat Sanchar Nigam Ltd, and industry associations, requesting them to “explore various possible options and confirm how Instagram/Facebook/WhatsApp/Telegram and such other mobile apps can be blocked on internet." Mint has seen a copy of the letter. 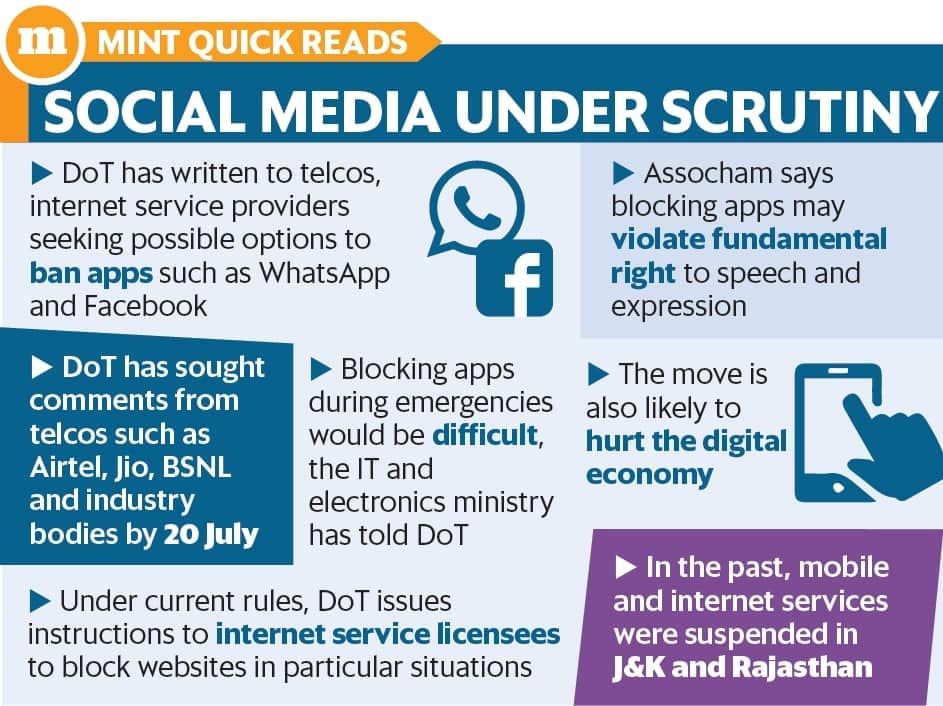 They were asked to submit inputs by 20 July.

“In our submission, we have said such an exercise would be extremely difficult to do. In this day and age, how can you shut down the internet especially as many travel bookings and financial transactions etc. are on the internet," a person aware of the development said, requesting anonymity.

DoT issues instructions to internet service providers to block websites based either on a court order or on the directions of the cyber law division of the ministry of electronics and information Technology (Meity). In this case, DoT, has merely initiated a discussion based on a letter received from Meity, a DoT official said. “There is no move to block any apps. Meity has told DoT that blocking such apps during emergency... situations is difficult, and hence there is a need for a reasonably good solution to protect national security," the official said, requesting anonymity.

While such suspensions are frequent in Kashmir, Rajasthan has also clamped down on internet services several times this year, most recently to prevent cheating in police constable recruitment examinations.

“This proposal for blocking apps is a requirement of the ministry of home affairs in the context of national security," a person privy to the matter said, requesting anonymity.

The industry is not pleased with the proposal. “Overly broad, extended, or frequent blocks would also run directly counter to the government’s stated objective of facilitating the emergence of a new Digital India," a 1 August letter by industry body Assocham to telecom secretary Aruna Sundararajan said.

The exercise can be counterproductive. “The government is trying to deal with a 21st century challenge with a 19th century mindset. Banning something arouses more curiosity. Such an exercise can only work within boundaries of the country and most such apps are not hosted here," lawyer Pavan Duggal said. An email query sent to Facebook that owns WhatsApp, Instagram remained unanswered.