Home >industry >Microsoft is more than a Windows and Office firm

Microsoft is more than a Windows and Office firm

Microsoft is more than a Windows and Office firm

Bangalore: He took over as managing director of Microsoft India Pvt. Ltd (MIPL) three months ago, moving from hardware maker Dell India Pvt. Ltd, where he was country manager. Rajan Anandan says the transition was smooth. “If the Dell stint was all about getting market share, the current (work at Microsoft) is all about creating new markets, which is fundamentally a different thing." 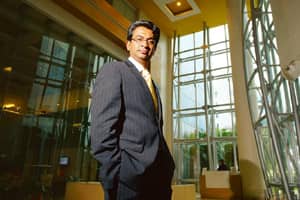 Confident steps: Anandan says his No. 1 challenge is to ensure that all Microsoft technologies are brought to the Indian market at warp speed. Hemant Mishra / Mint

While Microsoft is primarily identified through its popular Windows and Office software, Anandan wants the company to be known as a key enterprise player too.

In a wide-ranging interview, among the first since he took over, Anandan talks about his plans to reposition Microsoft more as an enterprise company in India. Edited excerpts:

Could you give us an overview of where MIPL’s operations are in India?

We have a very good market position in India. Over the last four-five years business has grown dramatically…by an order of magnitude, though we don’t disclose country specific (revenue) numbers.

The current (tough) market conditions present us an interesting set of opportunities and challenges. Our fiscal year runs from July to June. So, we are in our second quarter. Our first quarter was terrific. Growth in the second quarter has obviously slowed down. This is already being seen in the case of hardware players. Software tends to lag a bit, but clearly the impact will be felt.

However, there are certain segments, where unlike say an auto sector or real estate, the growth story continues albeit at a slower pace. We are focused on those segments.

And those segments are…

We see enormous growth potential in Central and state governments. The (IT) mission projects and the e-governance frameworks which have been announced are billions of dollars in spend.

(Our) public sector business is the fastest growing segment, though on a small (base); 40 state-owned enterprises are going to invest heavily in IT which again is an opportunity. Many of them like Oil and Natural Gas Corp. Ltd, State Bank of India, NTPC Ltd or Punjab National Bank are very well positioned to invest even in the current economic conditions. Communications, mainly telecom, is another major growth engine focus area for us. For instance, Bharat Sanchar Nigam Ltd’s phase VI rollout includes 93 million lines. WiMax rollout will happen in January. We are seeing strength in media companies which want to grow big on the Internet.

The SMB (small and medium business) space is showing a lot of resilience and our opportunity here will be through geographic expansion. Earlier, people may have wanted to invest in IT for growth, (now) it is to get savings.

But several of these public sector enterprises want to opt for free software and open standards regime. Some states such as Kerala, West Bengal and Tamil Nadu have even passed laws…

We want governments to be technology neutral and to focus on solutions.

Microsoft today has the most interoperable platform which is a part of our ethos. We want a level playing field. It is one thing (for governments) to say we will focus on Linux but I think the key is to focus on the best technology platform and the least total cost of ownership, whether it is Unix, Linux or a Microsoft platform.

Cost, scalability and user-experience are three critical issues and we clearly think, in most situations, Microsoft wins on all three counts. While others talk of open source, all we are asking is for openness.

What about your enterprise strategy?

Microsoft has till now been viewed as a Windows and an Office company in India. That is not completely true.

We want to be seen as a strong enterprise player who offers solutions in everything from business intelligence, ERP, CRM, virtualization, HPC, sales force automation, unified communication.

Our goal is to deliver business solutions that deliver breakthrough value. My No. 1 challenge is to ensure that all these technologies we have, be brought to the Indian market at warp speed. Some of them have been around. For instance, in ERP, we today have 800 installations which, after SAP (the eponymous software from the German business software firm), I believe, is the largest in India.

Others, we will have to accelerate. We have a large server and tools business.

Unified communication (UC) is helping companies cut down on travel costs and in India we are launching ‘roundtable’ which will turn every notebook computer into a video conferencing facility.

While others might have point devices (mainly software stacks) in UC, along with Cisco Systems Inc., Microsoft is the only player who has an end-to-end solution. While Cisco come at this with a hardware point of view through their virtual presence, we come at it through a software point of view. Also ours willbe at one-hundredth the price of similar offerings in the marketplace.

Our strategy is software plus services. In 10 years, India will be one of the world’s largest cloud-based computing services. This will address the issues of affordability as upfront costs are minimal and you pay as you use.

That sounds suspiciously like software as a service model which didn’t take off in the past.

It has not worked in the past for three reasons. Reach, affordability and availability of relevant solutions.

Earlier, the reach wasn’t there. Today, we have several thousand partners. We will charge hundreds of rupees not thousands of dollars per user, which will make it affordable.

About your Windows and Office business…

Piracy is down by a percentage but is still at a staggering 69%. Our efforts to emphasize the benefits of having Microsoft original software continue. As net penetration rises and viruses spread, people are realizing the benefits of using genuine software. Vista has taken off well in the corporate environment as we worked with our enterprise customers on application compatibility. Consumers anyway love Vista.