New Delhi: Shortly after terrorist attacks riddled South Mumbai, rather than turning on their televisions, thousands of people across the world turned to the World Wide Web for instant information.

Social networking sites, such as Twitter and Facebook, were instantly updated with on-the-scene information, all compacted into 140-word updates. Twitter seemed to be the most popular site, with 50-100 messages uploaded per minute, and tagged under the chain of “mumbai" or “#mumbai".

Some pleaded for information: “‘Emergency’ can some one check if there bomb blast of some shootout in Oberoi hotel of anywhere in Mumbai? I am at Inox inside".

Meanwhile, other users broadcast the news: “Guys pls stay wherever u r...mumbai is under terrorist attacks... god help us." Throughout the night and into Thursday, the site had a constant stream of voices reporting, commenting and lamenting the state of Mumbai.

Gaurav Mishra, a research fellow at Georgetown University studying social media, tracked the unfolding events in Mumbai by linking to other blogs, twitter posts and online articles on his Gauravonomics Blog.

He says Twitter had become a “de facto source for mainstream media", and that the few citizen journalists on-site in Bombay had become in-demand pundits overnight.

One such instant celebrity journalist, Mumbai-based Vinukumar Ranganathan, took around 300 photos around Nariman House shortly after the attacks began Wednesday night. An hour later, Ranganathan uploaded the photos onto his Flickr account and the news spread across Twitter that photos had been taken at the scene. The photographs have since been viewed over 50,000 times on Flickr and major international news outlets, such as Fox News and CNN, broadcast his photographs on air.

Writer Amit Varma posted a live account on his blog from Colaba’s Gordon House Hotel after narrowly escaping a shooting. He spoke on Larry King Live the next day to discuss the shooting.

Dina Mehta, who twittered and blogged about the attacks from her Mumbai home, said this sort of social media reportage had been used during the 2004 tsunami, and again during Hurricane Katrina and Hurricane Gustav. But technology?has?advanced?to include programmes such as Twitter that allow far more people, especially less tech-saavy people, to participate: “You have a space where anyone can actually contribute to it," she says.

The freedom of the Web, though, can also lead to rapid-fire rumours. At one point, Twitter users thought the terrorists were finding out about army movements from the website, and Mishra said he had to delete a series of Hindu fundamental propaganda posts from his site. However, he says the propaganda and misinformation is a small percentage of the postings and other users are quick to point out the mistakes.

When Mehta first heard of the attacks through a friend’s phone call, she turned on her television and her Twitter almost simultaneously. She said the two mediums complement each other and that she updated her Twitter account with news items taken from the local television to help inform people living abroad who didn’t have access to the Indian news channels.

Marc Florez, a financial adviser in New Mexico, wrote in an email that he became frustrated with the lack of news reports in the US media which “were reporting this as just a minor story among many." 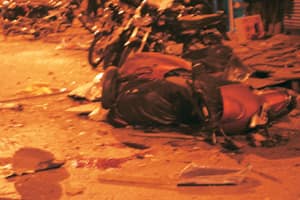 Shoot at sight: The two photographs were taken by Vinukumar Ranganathan at around 11pm on Wednesday near the Nariman House. He shot around 300 pictures shortly after the attacks began. Photographs courtesy Vinukumar

Other websites also quickly filled up with information: Wikipedia had a page up on the attacks by early Thursday morning. By afternoon, it had been updated at?least 500 times. A Google map was created just hours after the explosions to mark the locations that had been hit. By Thursday, it had been viewed at least 13,638 times. The South Asian Journalists Association, based in New York City, aired live webcasts discussing the event.

The Web also offered people a quick way to respond to large numbers of concerned friends, as users reassured one another via Facebook and Gmail status messages that they were alright: “Thank God our friends are safe this morning. Prayers for those still in the two hotels." And “Suzanne is safe from the massacre in Mumbai. Will try to stay away from landmarks in Delhi. Thanks".

Mumbai Help, a blog about “Surviving Mumbai—Information for emergencies in the Bombay area" offered to locate people in Bombay for friends outside the city and posts on Twitter implored people to donate blood.

Rahul Chandran contributed to this story