Mumbai: US investment bank Goldman Sachs is looking to invest close to $1 billion in India over the next three to four years through its private equity business, a senior executive at the firm said.

“We think the India opportunity is big and we plan to invest a fair bit of capital. The goal is to invest $200-300 million a year; potentially come close to a billion dollars in the next three to four years," said Ankur Sahu, co-head of merchant banking division (Asia-Pacific) at Goldman Sachs.

The firm’s primary investment strategy is one known internally as “platform builds" under which it sets up a business from scratch with a professional entrepreneurial team or acquires a large stake in small businesses and brings in a professional team to scale up the business. The investment bank first executed this in India through ReNew Power Ventures Pvt. Ltd and perfected it over other investments such as Global Consumer Products Pvt. Ltd and BPL Medical Technologies. 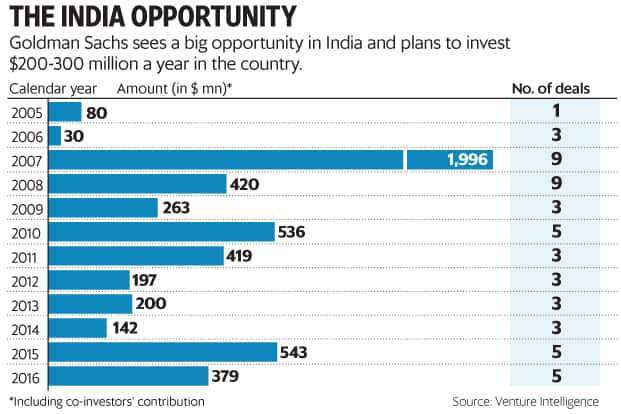 “We are currently in the final stages of reviewing two more platform deals, one in the financial services sector and one in a quasi-real estate space," Sahu said.

The strategy is markedly different from when Goldman first set up its own office in the country, investing in listed firms such as Mahindra and Mahindra Ltd and Max India, backing established business houses with high levels of credibility and integrity.

In India, Goldman’s platform build strategy, behind which it has invested significant sums of capital, emerged from the firm’s aversion to brokered and auction deals and the high valuation expectations of most promoters.

“What we saw in 2010—and to an extent continue to see even today—was that most private equity firms were looking at deals that were brokered by intermediaries or promoters and auctions, where the winner is the highest bidder. We also saw that valuations were high on a relative basis and also on an absolute basis. At times, there was also a lack of governance," Sahu explained.

Around the same time, the firm realized that executives at several multinational firms and Indian business houses were open to stepping out and starting up—provided they had the right kind of support.

“Through our global expertise and experience, we have specific views and convictions around certain sectors and how they will develop and play out. When we identify an experienced entrepreneur with a high-level of integrity and like-minded vision in such a sector, we take care of the need for capital, help pull together the resources to form the best team and leverage our global relationships to benefit a company—allowing the entrepreneur to focus on execution," said Sahu.

In India, Goldman’s first attempt at this differentiated investment strategy was a bet on ReNew and Sumant Sinha.

“We liked the renewable sector. There was a supply demand deficit in the country that was not going to be easily solved and renewables had advantages. We weren’t comfortable with the whole coal dynamic at that time and we believed that renewables was much better. We also had the experience of building up of renewables in the US and Europe."

Goldman has bet almost $400 million behind building the ReNew platform, one of its biggest investments in Asia, Sahu added. Goldman has repeated this in other sectors.

In healthcare, Goldman acquired a stake in the Nambiar family-owned BPL Medical Technologies and brought in a professional team headed by former GE executive Sunil Khurana. “It was a small business which has now grown five-fold and done an overseas acquisition. We believe it will become a $200 million plus business," Sahu said.

To be sure, Goldman follows other investment strategies in India. It is open to acquiring majority stakes in large firms and also buying distressed assets that can be turned around. But it will stay away from auctions. “We don’t like to participate in auctions. We like proprietary discussions with the seller or promoter families. We can also come in as significant minority investor, but will want to bring in proven professional management," Sahu said.

Even as it looks to invest in India, Goldman Sachs is also harvesting its earlier investments.

“Last year was a big harvest year. We exited Mahindra and Mahindra Ltd, which was a big success for us. We have also partially exited Max and also exited TVS Logistics," said Sahu.