Home / Industry / Infotech /  Why hire when you can deploy contract workers?
Back
Share Via

Why hire when you can deploy contract workers?

Amid uncertainty and arrival of disruptive tech, it makes sense to have more contract workers, say experts

India’s $150 billion outsourcing sector, led by Tata Consultancy Services Ltd (TCS), Infosys Ltd and Wipro Ltd, has increased its reliance on contract workers to complete projects even as it has hired fewer employees since 2011.

Wipro, the country’s third largest software company, hired more contract workers than full-time employees in each of the past six years. 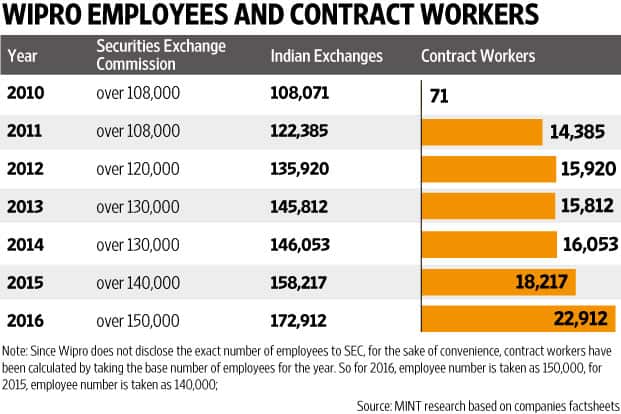 TCS and Infosys do not disclose the number of contract workers taken on, but their spend on such workers as a proportion of total revenue has more than doubled since 2011 (see chart). Importantly, both the firms’ spends on their own employees have fallen or only marginally increased in this period. 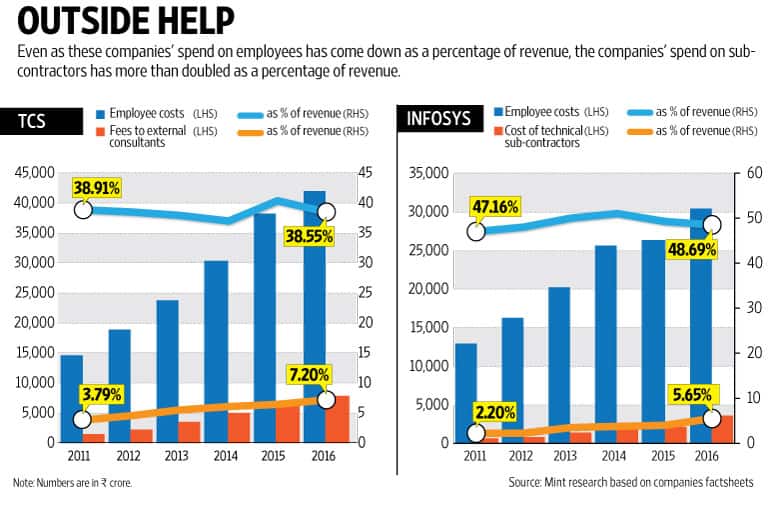 Amid a slowdown in hiring by IT firms, experts believe that the pace of hiring of contract workers will only increase, despite all companies focusing on training their current workforce to learn newer technology skills.

Significantly, a few technology executives maintain that this trend reflects the quality of revenue earned by these companies, suggesting that they are chasing commoditized outsourcing deals, rather than working on projects in newer areas.

“Increased hiring of contract workers is more because of demand than say by design," said one executive at a Bengaluru-based technology firm.

“This actually tells you about the quality of revenue earned by all IT firms as they continue to chase the bread-and-butter commoditized outsourcing deals. If the firms were truly hiring more data scientists or people with other niche-specific skill sets, why has the revenue headcount non-linearity not happened," asked the executive who did not want to be named.

The executive’s claim is validated as revenue per employee at Wipro, Infosys and TCS has fallen over the past three years.

Nonetheless, a few equity analysts believe that amid increased uncertainty of business and more disruptive technologies, it makes sense for companies to have more contract workers.

“A company may hire a certain number of employees at the start of the financial year, in anticipation of demand. But as the year progresses, it may not get the business it was expecting. Now, since most firms already have huge un-billable workers sitting on the bench, why take this risk (of hiring) when you can always deploy contract workers when a project comes up," said a Mumbai-based analyst at a domestic brokerage, who spoke on the condition of anonymity.

“All companies have more than 15% of their workforce sitting idle (this is called bench or un-billed workforce)," said an executive at Infosys. And unless they can make this bench billable, it makes no sense for them to take on more employees, added this person who asked not to be identified.

Wipro said in a filing to Indian stock exchanges that it has a headcount of 172,912 as of 31 March. Its latest filing to the US Securities and Exchange Commission said it has more than 150,000 employees.

The company explains that the difference is on account of contract workers hired by the firm. Wipro declined to disclose the exact number of full-time employees, but has shared details of the contract workers. Their number has increased from 70-odd in 2010 to more than 20,000 at the end of March.

“In the past few years, we have seen an increasing demand for niche skill sets in our fast changing industry and we engage technology specialists from time to time to maximize value for our customers. Occasionally, we deploy the services of contract workers to meet short-term requirements in certain skill sets, or in locations where we may not have a significant presence," said a Wipro spokesperson.

Executives at both Infosys and TCS admit that the increased hiring of contract workers is sometimes driven by projects in new technology areas.

Some experts say that this trend of recruiting more contract workers should not be interpreted as companies shying away from digital talent or skills development as companies could be looking at contract workers to complete traditional projects even as they make existing workers acquire newer skill sets, such as in analytics.

“I would interpret it as a margin play, pure and simple," said Deleon Narcisse, analyst at Technology Business Research, Inc., a US-based research firm. “Profits are getting choked as traditional outsourcing revenue declines, and Indian IT companies are building up their talent pools with digitally skilled workers (expensive) to adjust to changing market dynamics. Because of this, they are leaning much more on temporary workers and automated technologies for driving down delivery costs for less complex, traditional outsourcing work."

Ray Wang, founder and CEO of Constellation Research, a technology advisory firm, added, “This shift is really about new skill sets required. Digital is one piece of the pie, but not the complete story. This shows how skill sets are rapidly changing in disruptive areas. Something hot in 2016 may not be in 2018."

Both Wang and Narcisse said that this trend of hiring more contract workers will continue as technology firms see more business from clients in areas of digital services, such as cloud computing and analytics.