The Telenor deal is a shot in the arm for Airtel, whose dominance over the telecom industry is being threatened by Reliance Jio and a likely Vodafone Idea merger

As part of the deal, Airtel will assume the Telenor unit’s liabilities related to licence fees and lease obligations for phone towers, a Telenor spokesman said on Thursday. The transaction, which won’t involve any cash payments to Telenor, will give Airtel access to 44 million customers (increasing its user base to 307 million), 43.4 megahertz (MHz) of spectrum in the 1,800MHz band and 20,000 base stations.

ALSO READ | What Airtel gains from its Telenor acquisition 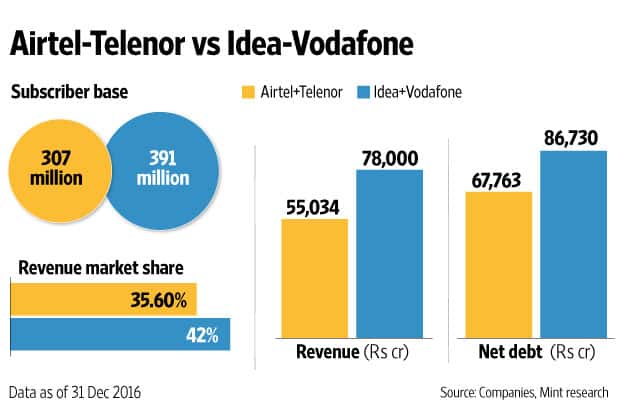 The Telenor transaction is expected to close in the first quarter of the year starting 1 April.

“The sale price is clearly very low for a business with 44m subs (subscribers) and NOK6bn revenues," Credit Suisse said. “Given the negative NPV (net present value) of the business at least it (Telenor) did not have to pay a big negative price to exit."

The acquisition comes as a shot in the arm for Airtel, whose 20-year-old dominance over the industry is being threatened by Reliance Jio and the potential merger of the nation’s second largest operator Vodafone India Ltd and No. 3 Idea Cellular.

As of December quarter, Telenor India had revenue and Ebitda of $160 million and $20 million, which is 4-5% and 1.5-2% of Airtel’s consolidated quarterly revenue and Ebitda, respectively, according to UBS Global Research. Ebitda, short for earnings before interest, tax, depreciation and amortization, is an indicator of operating profitability.

The Telenor acquisition strengthens Airtel in markets such as Gujarat, Maharashtra, Uttar Pradesh East and Uttar Pradesh West, where the company has lower revenue market share (RMS) than its national average.

With 56% combined RMS, Airtel will, however, exceed the regulatory threshold (50%) in Bihar.

“On completion, the proposed acquisition will undergo seamless integration, both on the customer as well as the network side, and further strengthen our market position in several key circles," said Gopal Vittal, managing director and chief executive officer (India and South Asia), Airtel. “The customers of Telenor India will now be able to enjoy India’s widest and fastest voice & data network, and a range of Airtel’s world-class products and services."

“It is our view that the significant investments needed to secure Telenor India’s future business on a standalone basis will not give an acceptable level of return," Brekke said.