The preferred address for tech start-ups

The preferred address for tech start-ups

Bangalore: It is 10am when Ashish Sinha hurriedly enters his office in Jayanagar in south Bangalore after a 45-minute bus ride. Without wasting time, the 31-year-old switches on his laptop and opens his email to search for a telephone number. He dials the number and starts talking, scribbling notes at the same time. 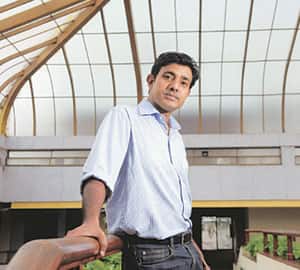 Sinha is not a journalist, but a blogger. For the past two-and-a-half years, Bangalore-based Sinha has been profiling technology start-up firms on his portal Pluggd.In, sometimes as many as three in a day. Giving many of these fledgling firms a leg-up, showcasing their products and services to potential investors and early users.

In order to keep his start-up directory—the first of its kind in the country—updated, Sinha meets at least two start-up firms and two angel investors a day. Leaving his office at 8pm, he blogs from home till 2am, profiling the firms, writing articles on the latest developments in the start-up world and discussing issues faced by fledgling firms.

Over months, Sinha has drawn a dedicated following of venture capital firms, such as Ojas Venture Partners and IDG Ventures India, looking for new ideas to invest in. And what started as a mere blog has evolved into a full-fledged portal with channels on funding, strategy, jobs and an exhaustive start-up directory.

It is unlike other Indian websites, including VentureWoods and WATBlog, that too write on start-up firms. Pluggd.In, which claims at least a million unique visits a month on average, stands out because it is usually the first to bring a company to the limelight, giving it the kind of exposure that is crucial to tempt early adopters—people who take a leap of faith to try a firm’s offerings, thus validating its products or services.

The start-up field is splattered with premature deaths of firms whose products or services failed to click with potential customers, and investors, in the absence of a clear marketing strategy.

Sinha, an alumnus of the Indian Institute of Technology, Roorkee, and the Indian Institute of Management, Bangalore—both premier institutes—worked for around six years in product management at companies such as International Business Machines Corp., Ketera Technologies Inc. and Yahoo Inc. He started Pluggd.In because he was attracted by the freedom of the blogging medium.

Finally, we are hearing a sensible line on free trade a ...

What the Amazon-Reliance dispute over Future is all about

Tatas might do well to rope in Singapore Airlines to jo ...

The soft-spoken blogger says the entrepreneurial ecosystem in India is inclined towards charismatic and media-savvy entrepreneurs. Quite a few bright start-ups fail, he says, as their promoters can’t create a buzz around them. “Pluggd.In, on the other hand, talks only about a product or a technology. We do not get influenced by the personal charisma or media suaveness of an entrepreneur," he says.

And as for showcase events such as Proto and HeadStart Network Foundation for start-up firms, Sinha says many of these are about creating that buzz and gathering a large audience. “Most events are sophisticated, suit-and-tie events. You really cannot go there and say, ‘I don’t have money to give to my employees’. They are not the forums to talk about such things."

Sinha says many companies that were first profiled on Pluggd.In were later showcased at start-up events. Expectedly, he is criticized by the organizers of these events for spoiling their bid to bring a company into the limelight for the first time. “The number of hate mails I get is very high. As long as what you are doing is right, even if it (annoys) certain people, it’s OK."

Kallol Borah, a co-founder and director of HeadStart Network Foundation, says a start-up showcase event is different from Pluggd.In, except for the common link provided by entrepreneurs. “Pluggd.In is a website. I also visit it. It’s a media portal driven by Ashish. HeadStart, on the other hand, was founded on the premise that an entrepreneur showcases his company and that we help the company become more customer-centric and not VC (venture capital)-centric," he says.

Early-stage technology venture capital firm Ojas Venture Partners, a regular visitor at both Pluggd.In and HeadStart events, says neither blogging nor a showcase can lead to funding. “They are both discovery mechanisms," says Rajesh Srivathsa, managing partner, Ojas, adding that both have their place.

Sinha says his biggest challenge lies in reaching out to companies in smaller cities. “A lot of social entrepreneurs are working there, but no one is writing about them." Sinha says his friends and acquaintances help him get in touch with new firms. At times, these firms approach him directly.

Meanwhile, some very young firms have gained from Pluggd.In’s coverage. For six-month-old Wingify, a New Delhi-based firm that offers website optimization software, the biggest challenge was in getting early adopters. The firm is yet to launch its product, but was pleasantly surprised when, within three weeks of being featured on Pluggd.In, it got 10 early users and possibly its first customer. Pluggd.In had profiled the firm in July, says Paras Chopra, chief executive, Wingify. The start-up had approached Sinha for using its optimization software on his website.

He used it, liked it and profiled it, says Chopra, adding that Sinha continues to use the software. The firm is now in talks with a Bangalore-based venture capital firm, which has a portfolio company looking for the kind of technology Wingify offers, said Chopra, adding that the talks are at an advanced stage.

“Having early adopters is crucial for a firm like ours. We need validation, some early users, before we make an announcement to the world. A lot of positive things have happened to us since the coverage," says Chopra.

Though Sinha does not charge the firms anything for profiling them, he works as a consultant for start-ups, advising them on issues such as refining a product or their sales plans. Also, he helps investors in doing due diligence on start-ups before they commit funding. He also charges a fee for connecting start-ups to angel investors.

Sinha now plans to make money from his portal by converting a few of its features into paid services. Sinha, who left his job with Yahoo in April, said earlier he didn’t want to monetize his website. “Now, I think it’s time for me to structure it better and formalize it."