Earlier this month, foreign investors were granted access for the first time to buy state loans. They fully exhausted the limit of ₹ 3,500 crore they were allowed by the Securities and Exchange Board of India (Sebi).

But apart from a slight narrowing of spreads between the yields of state loans and government of India bonds, the disconnect between market prices of SDLs and economic fundamentals of issuing states continues.

On 13 October, the Reserve Bank of India (RBI) conducted an auction of 10-year SDLs for 14 states worth ₹ 16,312 crore. The weighted average cut-off yields were between 7.95% and 7.98%. This translated into a 38-41 basis points (bps) spread over 10-year government securities (G-secs)—a slight decrease since the previous auction. One basis point is a hundredth of a percentage point.

The spread between the state loans and government bonds exists because there is no explicit sovereign guarantee on the former.

A further decline in the SDL-G-sec spread might be limited, given that foreign investors have already utilized their limits and trading volumes for SDLs continue to remain very low (around 5% of G-sec volumes). The low volumes are another reason for the existence of a spread between SDLs and G-secs. 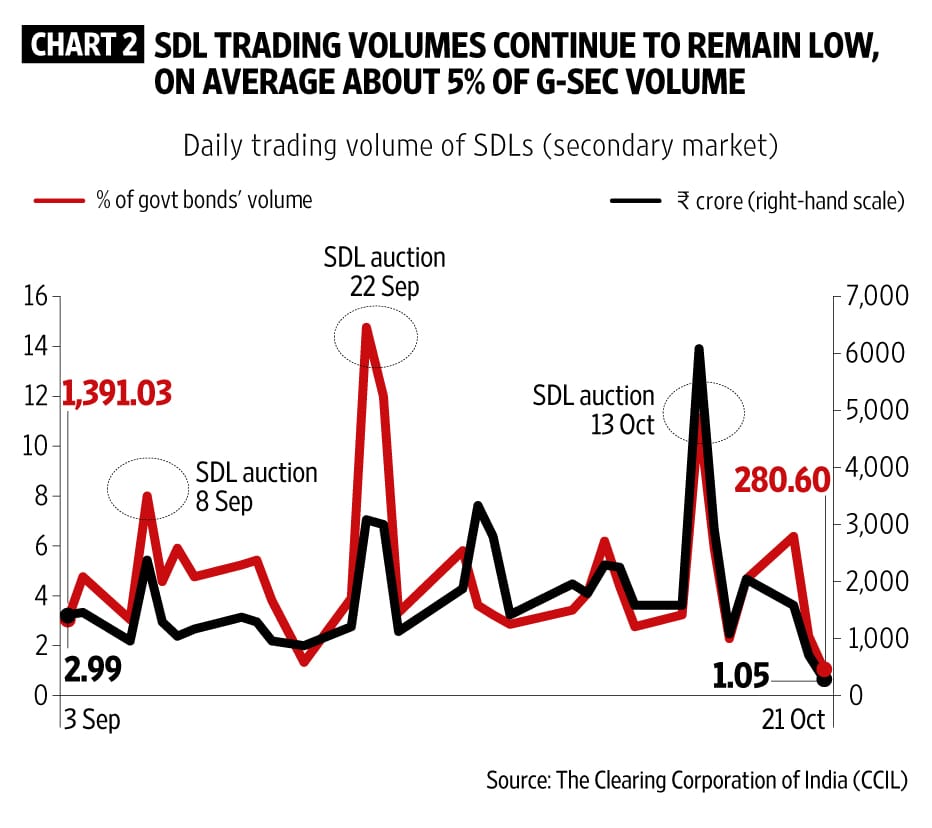 However, a more interesting point is that the markets do not seem to differentiate among states in terms of their fiscal health. The yields on SDLs with similar maturities for different states tend to remain very close to each other, whether in auctions or in the secondary market.

In the latest auction on 13 October, 10-year SDLs to Punjab were auctioned at a higher yield than West Bengal or Andhra Pradesh despite the former having a lower fiscal deficit in 2014 fiscal compared to the other two states. Moreover, the range of the cut-off yields was a meagre 2 bps, with Punjab (7.98%) and Gujarat (7.96%) being the two extremes. Thus, differences in states’ fiscal situation, or indeed their debt levels, seem to have little bearing on SDL yields. Such apathy can be attributed to the market’s perception of the SDLs being very safe investments. Although RBI does not explicitly guarantee SDLs, the “market believes that SDL are risk-free, as the RBI manages the borrowing and makes sure that states service the SDLs", according to Arjun Parthasarathy, chief executive, Zephyr Financial Publishers Pvt. Ltd. In other words, the markets are assuming an implicit sovereign guarantee.

Further, as a recent note from JP Morgan Chase Bank economists Sajjid Z. Chinoy and Toshi Jain points out, these perceptions are likely reinforced by the fact that the risk weights assigned to SDLs for the purposes of capital adequacy under Basel III norms are zero.

They also point out that the central bank oversees a Consolidated Sinking Fund (CSF) made up of states’ contributions which can be used to repay investors of state bonds. However, the size of this fund is less than half a trillion rupees compared to the outstanding SDL loan stock of ₹ 13.45 trillion.

Also, note that apart from foreign investors who can hold only up to 2% of the outstanding SDL loans, the other investors are largely state-owned banks and insurance companies.

They are largely captive buyers and, therefore, less sensitive to credit risk across states.