ICICI Bank CEO Chanda Kochhar did not need to recuse herself from the credit committee that sanctioned loans to Videocon as the bank was not an investor in NuPower Renewables, says chairman M.K. Sharma

Mumbai: ICICI Bank Ltd stepped up its defence of chief executive officer and managing director Chanda Kochhar, with board chairman M.K. Sharma saying that she did not need to recuse herself from the credit committee that sanctioned loans to the Videocon group as it was not an investor in NuPower Renewables.

Sharma was delivering a televised statement on Thursday, a day after the bank released a statement saying that the board reposed faith in Kochhar. 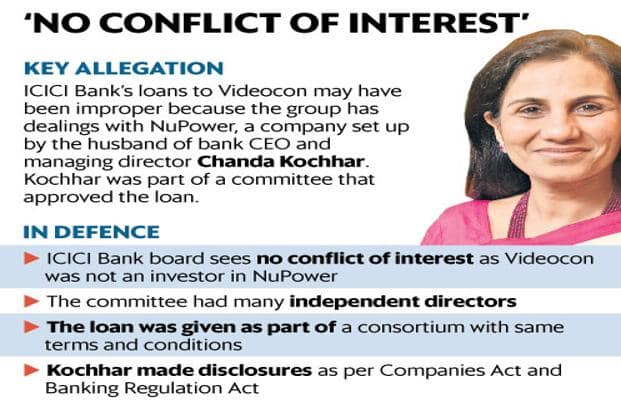 “The board does not see a conflict of interest in any manner since Videocon group is not an investor in NuPower Renewables," said Sharma. “Hence, there was no need to recuse herself from this committee. As mentioned earlier, this committee had many independent directors and the committee was not chaired by her. Moreover, it was part of a consortium arrangement where the terms and conditions had already been agreed upon by the consortium."

“When ICICI Bank sanctioned loan, Videocon group did not possess any shares of NuPower," said Dhoot in a text message.

Sharma also clarified that Kochhar “has been making all her disclosures in accordance with the regulatory guidelines under the Companies Act and the Banking Act".

ICICI Bank did not reply to an email seeking comments.

Proxy advisory firms are divided in their views on whether these allegations raise ethical and governance questions, with some calling for an independent review.

“Quid pro quo transactions, if they have occurred, violate the fundamentals of ethical business practices. Having said so, these are currently just allegations being made. That the board has taken a position and provided stakeholders with their point of view is good practice. If the stakeholders are not yet convinced, then the board must consider getting an independent review or investigation done," said Hetal Dalal, chief operating officer, Institutional Investor Advisory Services (IiAS). ICICI group through ICICI Prudential Life Insurance owns equity in IiAS.

“These are allegations. Does it mean that if someone is at a high-ranking position at a bank then their spouse or relative should not have a business of their own? And if they have a business, then all banking transactions should be examined bearing that in mind? Having said that, the board of the bank has verified these allegations—how independent is the examination one can speculate. The board has independent members, so we should assume it was a fair examination," said J.N. Gupta, co-founder and managing director of Stakeholders Empowerment Services, a proxy advisory firm.

But not everyone agrees. Shriram Subramanian, founder and managing director at InGovern Research, said a board verification is not enough. “If the allegations are true, then the lack of disclosures of related party transactions is a big corporate governance lapse. In such cases, all the board members become yes men. There is a need for an independent third-party verification and also for ICICI Bank to come clean on disclosures," he said.

In his statement, Sharma said that ICICI Bank has replied to the questions of regulators “satisfactorily", but declined to share any specifics.

“This is privileged information between the regulator and the bank and it would be totally inappropriate for me to go public with them," said Sharma.