Las Vegas: You’re at work when you get word of unexpected dinner guests. No problem. Smart appliances to the rescue.

In a world made possible by innovations unveiled this week at the Consumer Electronics Show (CES) in Las Vegas, you could whip out your smartphone on your bus or train ride home.

You use the virtual joystick to steer your camera-equipped vacuum robot around the living room, activating the speaker to tell the dog to get off the couch. You switch to the application on your phone which allows you to check recipes against the contents of your refrigerator, which sends you a text message telling you you’re out of milk. Once you’ve decided what you’re going to cook, you inform your refrigerator, which tells the oven to begin pre-heating based on the recipe you’ve selected. 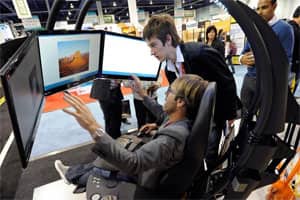 “Smart appliances, while they’ve been kind of a pipe dream for the last couple of years, are really becoming a reality," said John Taylor, vice president of LG Electronics USA.

South Korea’s LG is a leader in the field, which not only involves building Wi-Fi connectivity into appliances to allow them to communicate but also using real-time energy monitoring to save on electricity bills.

“Last year there were a lot of questions about when (smart appliances) are coming," said Kevin Messner, vice president of the Association of Home Appliance Manufacturers.

“The progress we’ve made over the last year on smart appliances from where we were last year at CES to where we are today is just staggering," he said.

A refrigerator at the LG booth at CES has a touchscreen built into the front with a “food manager" function that provides an inventory of what’s inside, where items are located - orange juice, left door - and expiration dates.

You compile the inventory of what’s in your refrigerator by taking a photo of your receipt from the grocery store with your smartphone and sending it to your fridge, or by scanning the barcode of each item individually.

A refrigerator being offered by LG rival Samsung lets you shop from select stores by dragging and dropping icons of various items - apples or eggs, for example - on a touchscreen and having the groceries delivered to your door.

That service is currently only available in South Korea.

A floor-cleaning robot from LG has not one but three cameras and yes, you can call it from your smartphone and tell the dog to get off the furniture.

Taylor said that while LG is “really bullish about the future of smart appliances," they are more expensive and are “certainly not going to be the majority of products in the marketplace" for some time to come.

“There is a certain level of consumer who wants the latest and greatest and will be attracted by some of the new smart features," he said.

Jon Van Dore, senior product development manager for China’s Haier, said rapidly changing technology poses a particular challenge for home appliance manufacturers, whose products are intended to last for a long time. “Technology has a life span of one to two years," Van Dore said, holding up his cellphone. “We have a life span of 10 to 20 years."

Wi-Fi connectivity and intelligent machines may be the wave of the future, Van Dore said, but he cited the cautionary tale of a rival appliance manufacturer who built a screen into a refrigerator a decade ago.

“It became obsolete in six months," he said. “It’s still a good refrigerator but now it’s got this old technology stuck to it."