Bangalore: Three years after India launched an experiment to patch up computers and servers across 17 cities to form a networked grid capable of handling complex computing problems, the project is slowly but surely catching the imagination of not just academia but industry and international partners as well.

After initial delays in setting up the infrastructure, the 100 megabits per second grid is currently up and running with 500 processors connected to it. “New processors are being added every week from 38 institutions and we’ll reach 1,500 processors in no time," saidS. Ramakrishnan, director general of the Centre for Development of Advanced Computing (C-DAC) in Pune, which leads this initiative. 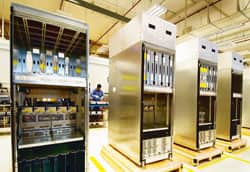 The initiative, christened Garuda after the winged mount of Hindu god Vishnu, is nearing its proof-of-concept stage in March, and has attracted attention from companies such as Microsoft Corp. and International Business Machines, IBM Corp.

“Microsoft and IBM have shown interest," said Ramakrishnan. When contacted, IBM said it “wished to be non-committal", while Microsoft expressed interest in high- performance computing, or HPC, projects based on its software platforms, without specifically commenting on Garuda.

“This (interest) is at various stages of discussions with respective organizations and is ranging from evaluation to deployment (and) is in line with Microsoft’s vision of getting HPC to the mainstream by making it easier for customers to deploy and manage HPC clusters," a company spokesperson said in an email.

Ramakrishnan also indicated that the Tata group’s Computational Research Laboratories, or CRL, with its Eka supercomputer might join Garuda.

Last month, Eka was adjudged the fastest supercomputer in Asia, and fourth worldwide, at an HPC conference in Nevada, US.

A CRL spokesperson said the scientists authorized to speak to the media were travelling and could not be reached for comment.

Even companies such as Infosys Technologies Ltd and Satyam Computer Services Ltd, which have their own enterprise grids, can participate in Garuda as they stand to gain both from the technology and potential applications, C-DAC’s Ramakrishnan said.

Garuda, for instance, is collaborating with the European Union’s EGEE (Enabling Grids of E-sciencE) to test interoperability, that is, to ensure if people in the two continents can submit ‘jobs’ or computing problems from their respective locations.

The Union department of information technology launch-ed Garuda in late 2004 with a budget of Rs25 crore to test the idea of bringing grid networked computing on scale of a supercomputer to research labs and industry in India.

New Delhi has in principle approved a national grid in the 11th Plan (2007-2012) and details of what will be the final shape of the Garuda grid are being formulated.

Grid computing is not just anytime, anywhere computing of brute industrial power. While some of its sheen may have been stolen by new versions of the ‘smart’ Internet—such as the so-called Web 2.0 or 3.0—researchers say grids have not lost theirrelevance.

“Web 2.0 will stimulate but not replace the grid," said Thomas Fahringer, professor of computer science at the University of Innsbruck in Austria. Fahringer, who has been involved with several grids in Europe, including EGEE, was attending an industry event in Bangalore last week.

“There’s a renewed dedication to supercomputing in India as data gets more integrated with equipment and real time sensing. We are talking of sensing, computing, and communication in real time," saidN. Balakrishnan, a computer scientist and associate director of Bangalore’s Indian Institute of Science (IISc).

For instance, in September, researchers in Europe and Asia launched a new program to fight the bird flu virus with the help of EGEE. Using gridsupercomputing power, they will look for the right molecules, from a pool of 500,000 molecules, which can impede the activities of the influenza virus.

Running computing-hungry applications on Garuda may be some time away, though.

“We have not committed any money for applications in this phase; we’ve just run some disaster management trials through the Space Application Centre in Ahmedabad," said Ramakrishnan.

To start off, C-DAC has set up a bioinformatics portal, along with the general purpose portal, where some ‘real’ research problems are being cracked.