Raghuram Rajan sets agenda for rest of his term

Mumbai: Reserve Bank of India (RBI) governor Raghuram Rajan set himself a crowded agenda in the last four weeks of his term as he left interest rates unchanged in his final monetary policy review on Tuesday.

“This is my last policy statement, but there are still 28 days in my term which I intend to use fully," said Rajan, who will step down on 4 September at the end of his three-year tenure.

On his agenda: guidelines for peer-to-peer (P2P) lending platforms and account aggregators, new norms to improve the functioning of corporate bond markets and tweaks to the marginal cost-based lending rate (MCLR) system, which Rajan hopes would improve the pass-through of past rate cuts by the central bank.

Rajan didn’t reveal specific details on how the MCLR norms will be changed. The need for a tweak stems from the regulator’s unhappiness with commercial banks not passing on RBI policy rate cuts to customers by cutting their loan rates.

RBI has cut the policy rate by a cumulative 150 basis points (bps) since the start of 2015; in the same time, the benchmark lending rate of State Bank of India, the nation’s largest lender, has dropped just 90 bps. One basis point is one-hundredth of a percentage point.

ALSO READ | Raghuram Rajan is not done, yet

New-age lenders and information providers are the other areas of focus. In April, the regulator had first released a discussion paper on P2P lenders, opening a debate about giving them the status of non-banking financial companies (NBFCs) even though they do not lend directly to borrowers.

The paper proposed a minimum capital requirement of ₹ 2 crore and doing away with escrow accounts to hold money before it is disbursed to borrowers. Final guidelines are awaited.

Similarly, final norms on account aggregators—firms that provide customers with a single-window view of all their financial asset holdings across bank accounts, insurance policies, mutual funds, shares and so on—are awaited after a discussion paper was put up in the public domain in March. 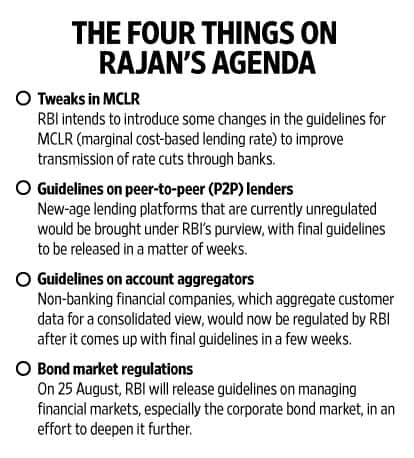 In the case of corporate bonds markets, Rajan said that new norms will be announced on 25 August which will build upon suggestions of a panel headed by ex-deputy governor H.R. Khan.

The core of this report was making corporate bonds eligible for repo transactions—which will essentially allow them to become part of RBI’s liquidity adjustment facility.

That will increase trading and liquidity and increase the depth of the corporate bond market as more companies raise funds from bonds rather than banks.

Rajan also said Michael Patra, an executive director, would be the third member from RBI, along with the governor and deputy governor, to be part of the proposed monetary policy committee (MPC) in charge of monetary policy.

ALSO READ | How successful has Raghuram Rajan been in reducing inflation expectations?

He said he hoped that the next policy would decided by this committee.

As part of a new monetary policy framework, the central bank and the government agreed to set up a six-member panel to decide on key policy rates. It would have equal representation from RBI and the government; the latter is still finalizing its members. The MPC will adopt the formal inflation target of 4% with an upper and lower tolerance threshold of 2% and 6% respectively, which the government formalized last week.

Currently, the retail inflation reading of 5.7% in May is uncomfortably close to the upper tolerance threshold of 6%. It is also higher than RBI’s own March 2017 target of 5%, prompting the governor to keep the repo rate unchanged at 6.5% on Tuesday.

Still, the monetary policy statement reiterated that RBI’s stance remains accommodative and it will focus on providing adequate liquidity, helping to improve the pass-through of past rate cuts.

While inflation has quickened for three straight months, and there are upside risks such as the Seventh Pay Commission salary hikes for government employees and uncertain core inflation (excluding food and fuel), the central bank stuck to its forecast of inflation averaging 5% during the current fiscal year.

RBI’s own survey of professional forecasters expects inflation to decelerate to 5.1% by March.

RBI also kept its gross value added (GVA) forecast unchanged at 7.6% for fiscal 2017 as it expects a normal monsoon and consumption stimulus from the government employee pay hike to boost growth.

“I don’t think one can argue that there is future inflation anticipated and therefore it would be impossible to do rate cuts. Rate cut is down on the time path of inflation," Rajan said.

Meanwhile, the emphasis continues to be on providing liquidity. Indeed, in a departure from his earlier statements, Rajan downplayed the recent improvement in liquidity and said RBI has erased just 40% of the structural liquidity deficit.

He said the recent surplus in liquidity was owing to seasonal factors and RBI will purchase bonds from the open market to buttress this point.

The stress on liquidity and the fact that the central bank will “front load" its liquidity infusion livened up the bonds market, where yields dropped to fresh three-year lows. The 10-year benchmark government bond yield fell 5 bps to end at 7.12%.

The last monetary policy review of Rajan’s term precedes the maturity starting next month of close to $26 billion of foreign currency, non-resident (bank), or FCNR (B), deposits mobilized by commercial banks three years ago to ward off pressure on the rupee.

“I really like that they said they would be front-loading liquidity infusion. When they do this, banks need not chase depositors ahead of the FCNR redemptions. The way in which they calibrate this is important and in this view, Thursday’s open market operation is a good sign," said Ananth Narayan G, regional head of financial markets for South Asia and the Association of South-East Asian Nations (ASEAN) at Standard Chartered Bank.

In a separate statement, RBI said it would purchase government bonds worth ₹ 10,000 crore on Thursday. The central bank has infused close to ₹ 80,000 crore into the banking system through bond purchases.

“Earlier, some bankers had said that it was the lack of liquidity that was holding rates high, now I hear from some that it is the fear of FCNR (B) redemption that is making them reluctant to cut rates. I have a suspicion that some new concern will crop up once the FCNR (B) redemption is behind us," he said.

To be sure, Rajan did say that lending rates will fall when credit growth picks up. Banks have been reluctant to lend because of their huge bad loan pile.