New Delhi: The choice of G.N. Bajpai, one of the seven members of the government-nominated board set up to rescue debt-laden Infrastructure Leasing and Financial Services Ltd (IL&FS), has now come under scrutiny, with proxy advisory firms questioning the rationale behind his appointment.

Their reasoning: the Serious Fraud Investigation Office (SFIO) had flagged a case of conflict of interest against Bajpai, a former chairman of the Securities and Exchange Board of India, when he was an independent director on the board of the now-defunct Kingfisher Airlines.

SFIO observed at that point that Intuit Consulting Pvt. Ltd, a firm run by Bajpai, had received payments for services to the airline when he was an independent director on its board. Bajpai quit the board in January 2012, just before the problems at the airline intensified.

The report said Bajpai’s Intuit Consulting “was appointed on a retainer basis to provide management consultancy on competency building, good governance and economy by the UB Group/KFAL (Kingfisher Airlines Ltd)".

“In Bajpai’s case, it’s a clear case of government memory being too short. This is because Bajpai has had a history where he has been associated with companies with questionable corporate practices," said J.N. Gupta, co-founder of Stakeholder Empowerment Services, a proxy advisory firm. 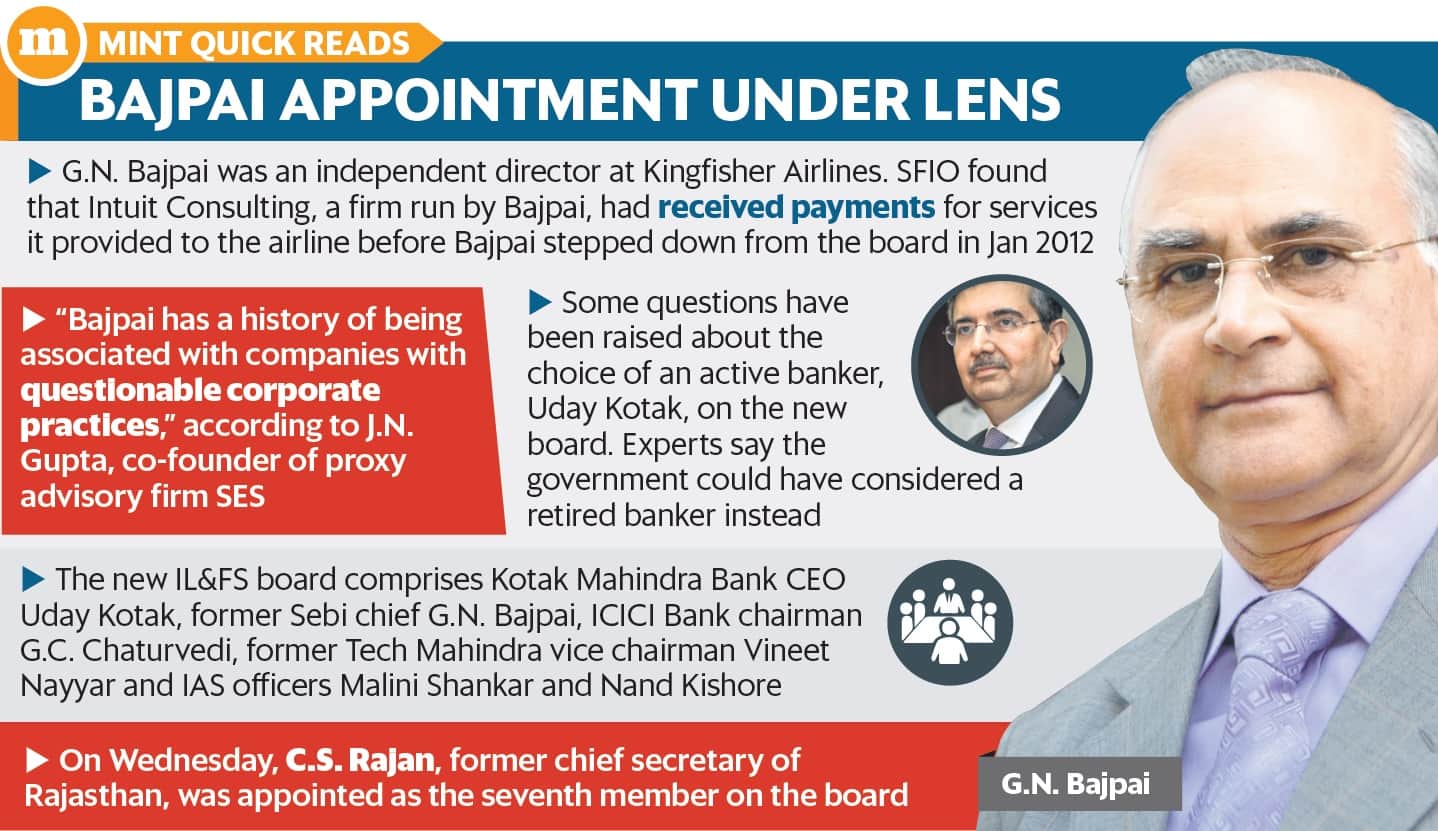 On Monday, the government dissolved the board of IL&FS and appointed a six-member board, led by Uday Kotak, managing director and chief executive officer of Kotak Mahindra Bank. While some questions were also raised about the choice of an active banker for the new board, in the absence of specific information about Kotak Mahindra Bank’s lending to IL&FS, there does not seem to be any real conflict of interest.

“In Uday Kotak’s case, I believe, it can be termed as too fine too far. This is simply because Kotak Mahindra Bank’s exposure to the ₹ 91,000 crore debt of IL&FS is negligible," said Gupta.

Bajpai, in the past, has been an adviser to 63 Moons Technologies Ltd, formerly Financial Technologies (India) Ltd, a firm that is under the scanner of regulatory authorities.

“Of course, the government knows what happened in Kingfisher Airlines and about Bajpai. But it seems those developments happened years back and so nobody wants to look back at your past when forming committees," said Gupta.

Another head of a proxy advisory firm also believed that some of the appointments were odd. “You can question if having Uday and Bajpai is following the best corporate governance practices," said the head of a proxy advisory firm on condition of anonymity. “It looks like the government wants to get someone who can roll up his sleeves and get the work done. So, no one better than a banker like Uday. Sure, the government could have looked at some other retired banking executive."

Gireesh Chandra Prasad in New Delhi contributed to this story