More than Rs8.44 trillion has been deposited or exchanged at banks till 27 November, against an estimated Rs16 trillion of old notes in circulation, according to RBI data

The Rs8.44 trillion that has been deposited or exchanged at banks between 10 November to 27 November is half that of the estimated Rs16 trillion of these notes in circulation at the time of demonetisation. 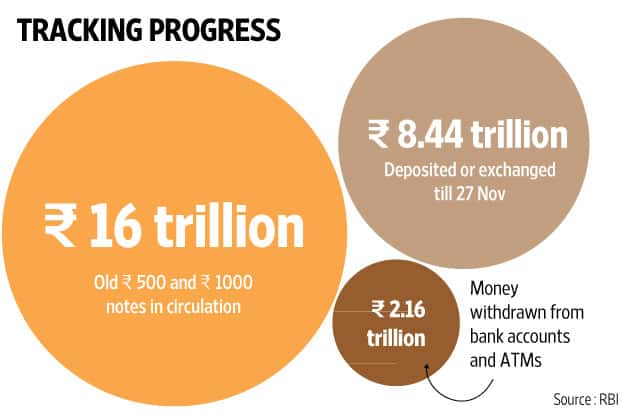 While ₹ 8.11 trillion was deposited with banks by people, around ₹ .33 trillion was exchanged at the counters. The Union government had discontinued exchange at bank counters from the midnight of 24 November.

During this period, the total withdrawals amounted to Rs2.16 trillion from bank accounts and ATM, RBI said.

Prime Minister Narendra Modi had declared ₹ 00 and ₹ ,000 currency notes as illegal tender with effect from 9 November. People were given time till end December to deposit these old notes in bank accounts. The government was expecting that a part of these notes—around ₹ 3-4 trillion—will be black money and will not come back into the banking system.

However, with the government proposing another income disclosure window and giving people a choice to come clean by paying a high tax and penalty, expectations have risen that more of these currency notes will be deposited with banks.

To be sure, there have been widespread reports of tax evaders using innovative ways of legalizing their illegal wealth including using forex dealers, jewellers and money launderers. This has prompted a crackdown by the income tax department with numerous surveys being conducted over the past three weeks to check such illegal practices.