In the year to December, cigarette sales dropped to 88.1 billion sticksa 15-year low and a decline of 8.2% from 95.9 billion sticks sold in 2014, says Euromonitor study

New Delhi: Are more Indians kicking the butt? A study by research firm Euromonitor International seems to suggest they are smoking less.

Yet, at the same time, they are smoking more counterfeit brands and smuggled cigarettes that the tobacco industry refers to as “illicit trade cigarettes".

In the year ended December, cigarette sales dropped to 88.1 billion sticks—a 15-year low and a decline of 8.2% from 95.9 billion sticks sold in 2014, according to the Euromonitor study.

Cigarette sales by volume have been declining since 2011. The drop in 2015 was the steepest, the study added.

This is probably the biggest reason why retail volume of branded cigarettes has fallen. To be sure, there are other reasons—steep tax increases on cigarettes and government efforts to curb sales of tobacco products by making larger pictorial warnings mandatory on cigarette packs. The government’s aim is to reduce tobacco use by 20% by 2020 and 30% by 2025.

According to the Eurominitor study, cigarette sales in India contracted at a compound annual growth rate of 2.2% in terms of retail volume between 2010 and 2015. 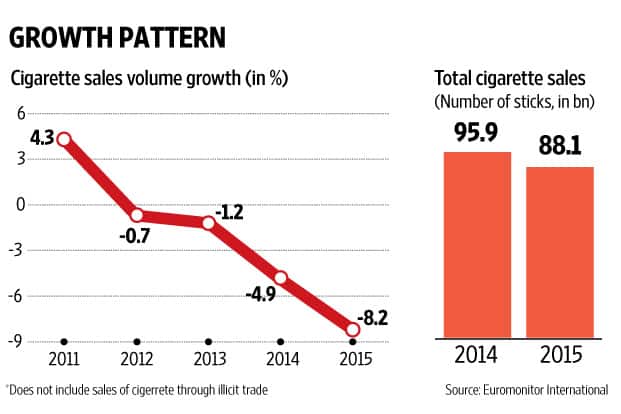 Cigarette makers have been expressing concern about the rise of the illicit cigarette trade and the impact of stiff taxes on the tobacco industry.

“Legal cigarette industry continues to be severely impacted due to the cumulative impact of steep increase in taxation and intense regulatory pressures," ITC Ltd, the country’s largest cigarette maker, said in its quarterly earnings statement on Thursday. “Illegal trade continues to grow resulting in significant revenue loss to the exchequer."

“High incidence of taxation and a discriminatory regulatory regime on cigarettes in India have over the years led to a significant shift in tobacco consumption to lightly taxed or tax-evaded tobacco products like bidi, khaini, chewing tobacco, gutkha and illegal cigarettes which presently constitute over 89% of total tobacco consumption in the country," ITC said.

Starting 1 April, the government has made it mandatory for packets of cigarettes to contain pictorial health warnings covering 85% of the space on both sides, up from 40% earlier, in a bid to discourage smoking, linked to the deaths of a million Indians every year.

While sales by volume dipped, companies like ITC managed to expand revenue through price hikes. According to a 21 June note by brokerage firm Nomura, ITC has increased prices by 13% for its premium brands.

The country’s second largest cigarette company, Godfrey Phillips India Ltd, also reported a decline in cigarette volume and a 4.2% increase in revenue for the fiscal year ended March 2016. “The domestic cigarette industry continues to reel under the pressure of increased indirect taxes," it said in its annual report.

The cigarette market in India is dominated by ITC with a 78.5% share of sales by volume, followed by Godfrey Phillips (13.5%) and VST Industries Ltd (7%), according to a report by UBS Securities India.