Indian IT companies, led by TCS, Infosys and Wpro, need to accelerate change and address internal structural issues if they want the IT industry to remain future-proof

Bengaluru: Thirteen years after the winds of liberalization first swept across the Indian economy, Thomas Friedman took a Lufthansa flight to Bengaluru where he visited the offices of Infosys Ltd to discover that the world is flat.

Beside a giant flat screen at the headquarters of what was then India’s technology bellwether, Nandan Nilekani, then chief executive officer (CEO) of Infosys Ltd, told the American author: “Tom, the playing field is being levelled."

In his best-selling The World Is Flat: A Brief History of the Twenty-First Century published the next year, Friedman marvelled at the many quiet revolutions beneath this tectonic shift. Among them: Outsourcing, in-sourcing and offshoring.

Thirteen more years later, in May 2017, another CEO of Infosys addressed the company’s annual sales conference in San Francisco. The tone was sombre: “If you can’t fly, then run; if you can’t run, then walk; if you can’t walk, then crawl; but whatever you do, you have to keep moving forward," Vishal Sikka quoted US civil rights activist Martin Luther King in his speech. Most Infosys engineers were merely crawling, the company’s first non-founder CEO did not fail to mention. 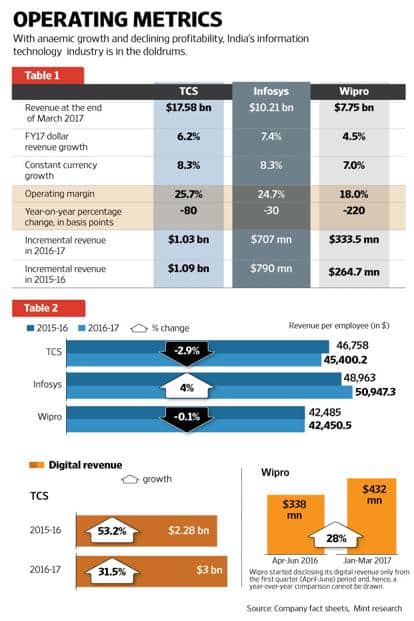 When it comes to delivering high-value services to clients, Infosys has lagged. It’s not alone. With anaemic growth and declining profitability (see table 1), India’s information technology (IT) industry is in the doldrums. Flat now recalls the growth of India’s $150-billion IT industry, rather than a new-world topography.

For the first time since 2009-10, Tata Consultancy Services Ltd (TCS), Infosys and Wipro Ltd, which make up a quarter of the IT industry’s total business, grew slower than the industry’s 8.6% growth in constant currency terms in 2016-17. Constant currency eliminates the effect of currency movements.

Profitability, too, took a hit at the largest IT companies, which employed 3.9 million people as at the end of March 2017, lobby group National Association of Software and Service Companies (Nasscom) said in May.

Consequently, the technology sector is in the midst of its biggest retrenchment season. Seven of India’s biggest software services firms are planning to ask at least 56,000 engineers to go this year—a number that could grow if more bad news comes in.

The expansion of the Internet in the past decade has led to wider adoption of artificial intelligence, allowing companies to lease computing power by the hour. This has upended Indian IT’s model of deploying armies of engineers in low-wage countries to write software codes and manage technology infrastructure for their clients in the US and Europe. The latest challenge is protectionism in the US, which has squeezed work visas for low-wage Indian IT engineers working with clients in that country.

“Indian IT firms started out as custom software houses. They created a unique delivery model where 75% of the work could be done in India using low-cost but highly skilled computer scientists. This task is increasingly done by machines using artificial intelligence (AI), thereby not requiring the high volume of engineers," said Vijay Govindarajan, Coxe distinguished professor at Tuck Dartmouth College’s Tuck School of Business.

“Big is no longer beautiful," added Phil Fersht, CEO of US-based HfS Research, an outsourcing research firm. “What required 50 programmers, analysts or accountants five years ago can be done by a handful of smart thinkers and much smarter systems. If I were Indian Prime Minister Narendra Modi, I would be very concerned that a whole workforce generation needs reorienting to address work activities that are growing in demand."

As Indian IT goes through one of its most challenging times, almost all the largest companies have seen new managements at the top.

Save for Tech Mahindra Ltd and Nasdaq-listed Cognizant Technology Solutions Corp., almost all IT companies are now led by recently-appointed CEOs. Five companies—TCS, Wipro, HCL Technologies Ltd, Mindtree Ltd and Zensar Technologies Ltd—appointed a new CEO only in the past 15 months, while Infosys and L&T Infotech Ltd appointed a new boss in August 2014 and August 2015, respectively. At Cognizant, 11 of the 18 senior-most executives took charge only in the past 15 months.

“A new management at the top means each of these companies can approach this change sweeping the industry with a new mindset, new ideas," said a senior TCS executive on condition on anonymity. “We have to give time to each of these leaders to see how they steer their respective companies."

To be sure, the change of guard has provided some early glimpses of possible changes from the way these firms have traditionally worked.

At Wipro, Rishad Premji, chief strategy officer and director, oversees the $100-million Wipro Ventures with the mandate to pick stakes in start-ups focused on disruptive technologies. Since setting up the corporate venture fund, Wipro Ventures has spent $25 million to pick minority stakes in nine start-ups, helping parent Wipro offer new-age technology solutions in areas of data analytics and artificial intelligence technology work in more than 60 engagements to some of its 1,300 customers.

In the past two years, most Indian IT firms have been building a platform-led approach, while avoiding the people-led model. Some are retraining existing workforce using innovative methods like the user-centric approach of design thinking and have been investing in digital technologies, partnering with cloud computing firms and building automation platforms.

Everyone swears by digital, a word which means different things to different people. All firms are building solutions in areas such as data analytics, thereby seeing a scorching growth in “digital". The true value of digital is still in question as many analysts believe home-grown IT firms earn little from offering next-generation solutions, while the bulk of the digital revenues are simply re-badged traditional work.

“Take for example a classic work like ERP (enterprise resource planning) upgrade to support a subscription billing model. Now that project to any IT services vendor worth their salt is being classified as digital revenue. Is this really digital?" asked Ray Wang, founder of Constellation Research, a technology research and advisory firm.

At the heart of the problem is a fundamental change in the business model that Indian IT companies are wrestling with in the digital area. The traditional business of writing software codes and managing the IT infrastructure of clients based in the US and UK still makes up the bulk of sales for these companies.

“Digital revenue is still less than one-fourth of traditional business. Meanwhile, traditional business is slowing. All of us have to re-look at the existing talent pool to make sure it is aligned to future needs," said one of the human resource (HR) heads at a large Bengaluru-based IT company.

And herein lies the most daunting challenge for Indian IT firms: embracing the change brought in by newer technologies, while maintaining growth and profitability. Take cloud computing. Hosted servers offered by Amazon Web Services means Fortune 1000 clients no longer need armies of engineers from Indian IT firms to manage their core applications at in-house data centres. This torpedoes Indian IT’s model of generating more revenue from more people. At the same time, companies are increasingly embracing automation-led platforms, which is further squeezing revenue, as most savings go to the clients.

“In some projects, introduction of cloud computing means we are seeing at least 50% reduction in FTE (full-time equivalent or the hours worked by one employee on a full-time basis)," said a senior executive at Infosys.

“The second big source of revenue for Indian IT firms is in managing the data servers of global clients like GE. This business is fast eroding as well since companies use their own servers less and less and store data in the Cloud," said professor Govindarajan.

Understandably, most IT companies are seeing a decline in their revenue per employee, an important metric of gauging if the firm is able to deliver more value-added work to clients (see table 2).

The only solution before these large companies to tide over the challenges is to make themselves future-ready faster. Homegrown IT firms, especially TCS, need to step up investments in new technologies, and the managements need to shed their “invented here" approach.

TCS has stubbornly avoided acquisitions; the management says it can build new technologies in-house. When companies across the globe are struggling for growth, small acquisitions can not only help bring in technology and talent but also growth. Accenture Plc, a company twice the size of TCS, has made acquisitions in slow-growth years. The company saw its 15 acquisitions account for 2 percentage points of its overall 10.5% constant currency growth in its September-August fiscal year.

Still, Indian IT firms’ ability to survive and thrive will eventually be judged on how quickly they can shed their image of back-office IT vendors and become strategic partners to their customers.

Indian IT owes its success to the largest Fortune 1000 clients, as they are the biggest spends on technology. However, newer companies such as Facebook, Uber, Airbnb are fast disrupting the business of incumbents.

The inability of most Indian IT companies to work with these disruptive companies even as Google, Facebook, Amazon, Uber and Airbnb account for at least $1 billion of Accenture’s $32.9 billion in revenue for the year ended August 2016 shows how homegrown IT companies have not been able to step up to the new challenges.

“The biggest opportunity for IT firms is to help global companies re-imagine their industry using digital technologies. The problem for Marriott, for instance, is less about digitizing manual processes, the core of the business for Indian IT firms in the past. Instead, Marriott has to create Airbnb. Note that Airbnb is not a hotel using technologies but it is technology business that redefines hospitality. If Indian IT firms have to help Marriott, they must become strategy consultants first and IT consultants next," said Professor Govindarajan.

Bringing about change in a large organization isn’t easy, either. Until now, Sikka’s 33-months record at Infosys and Abidali Neemuchwala’s one year at Wipro have been patchy at best. TCS has a new boss in Rajesh Gopinathan, who took over as CEO and managing director after N. Chandrasekaran became chairman of Tata Sons Ltd in February. The rest of this year will test the mettle of the three leaders in an IT era when change promises to be the only constant.

Homegrown technology companies need to accelerate change and address internal structural issues if they want this industry, which at the turn of the century put India on the global software services map to emerge as the largest job creator in the organized sector, remain future-proof.

Or as Professor Govindarajan said, only time will tell which companies emerge as winners