Mumbai: Amendments to the Insolvency and Bankruptcy Code (IBC) aimed at preventing company founders suspected of wrongdoing from regaining control of their assets may shut the doors on clean bidders too, stakeholders say.

The executive order bars not only wilful defaulters, but also several other categories of potential bidders. These include loan guarantors, those with loans classified as non-performing assets (NPAs) for at least a year, directors in companies that are disqualified, entities barred by the Securities and Exchange Board of India (Sebi) and those who have been found to have struck fraudulent transactions with a company, and connected entities. 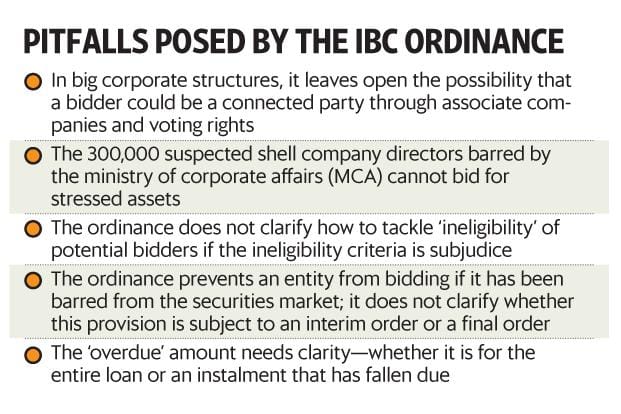 The connected entity definition includes a “related party", too. Under IBC, a related party includes relative of directors and key managerial personnel of corporate debtors and any person who controls more than 20% of voting rights in the debtor.

A 27 November BloombergQuint report cited the example of Sajjan Jindal’s JSW Steel Ltd as a possible casualty of this rule. Sajjan Jindal is the brother of Naveen Jindal, whose company Jindal Steel and Power Ltd was recently declared a non-performing asset. He is also the brother-in-law of Sandeep Jajodia, the promoter of Monnet Ispat and Energy Ltd, a company undergoing resolution under the Insolvency and Bankruptcy Code.

But not all agree with the interpretation.

“There is no problem for any bidder whose promoter has not defaulted. Promoter has to be considered, according to the Sebi (Securities and Exchange Board of India) regulations," said Seshagiri Rao, joint managing director and group chief financial officer of JSW Steel.

Sebi rules defines a promoter as someone who holds a stake of 10% or more in a company and is in control of the issuer (company); or is instrumental in the formulation of a business plan after its listing.

A government official familiar with the matter said the ordinance was aimed at providing a level playing field to all applicants.

“All prospective resolution applicants and those connected with them are required to pass the litmus test of not attracting any of the ineligibility conditions," said the official on condition of anonymity.

Even those whose accounts have been declared NPAs for over a year have been given a window of opportunity to overcome the ineligibility clause by paying up the overdue amount, this person said on condition of anonymity.

According to Mamta Binani, an insolvency resolution professional, the most important clarification needed is on “overdue" amount. The amendment says entities that have had loan accounts classified as bad for more than a year and are unable to pay overdue amounts before submission of the resolution plan for a stressed asset are barred from bidding for it.

“Does the overdue amount mean the entire loan amount or just what was due in the current instalment. Because when an account turns NPA, the total amount is recalled. This clarification will be very critical," said Binani. “The ineligibility period needs to exclude the period of insolvency proceedings because once an insolvency (case) commences, a promoter cannot pay any dues."

Separately, the disqualified director clause gains prominence since the ministry of corporate affairs has suspended 300,000 directors for associating with firms that did not file financial statements with the Registrar of Companies for at least three years. Some of these directors have challenged their suspension in the courts.

The amendment also does not clarify how bidders will be treated if the ineligibility criteria has been challenged. “While the ordinance lays down ineligibility criteria, it does not deal with a situation where such criteria are already a subject matter of challenge before the concerned courts. Would such applicant still be ineligible or otherwise?" said Diwakar Maheshwari, a partner at law firm Khaitan and Co.

The amendment also proposes that any person who has been barred from trading and accessing the capital markets should not bid for the assets on the block. According to the capital market regulator’s annual report for 2016-17, 563 entities were prohibited by Sebi from the capital markets. “It is unclear if firms or individuals can be resolution applicants (if their) registrations have been cancelled or heavy penalties have been imposed due to various irregularities, but they may not be barred from trading or accessing securities market," said Sumit Agarwal, a partner at Suvan Law Advisors.