To many of us, appearing for Class 10 examination might have been our first big test in life. But when 17-year-old Abhishek Kumar Gupta from the village of Lalganj, Uttar Pradesh, sits for his examinations this April, he’d have already won a battle. Gupta has been fighting cancer for the past four years. In 2010, when he was diagnosed with leukaemia or blood cancer, his world came crashing down. That he had lost his parents at a very young age, made matters worse. His battle took him to Varanasi and then later to Mumbai, to the Tata Memorial Hospital—one of India’s leading oncology hospitals—where Gupta’s treatment finally started. But raising money for the costly treatment wasn’t easy. His uncle—and aunt, with whom he lives—runs a small paan shop in his village. “My treatment cost about 4 lakh then. There was no way we could have afforded that," Gupta said over the phone.

Around the same time, the Indian Cancer Society (ICS; one of India’s largest non-government organizations, NGOs, that raise money for cancer treatment and rehabilitation) was putting together a plan to have a consistent way of receiving donations. After a meeting that ICS had with mutual funds (MFs), investment bankers and other banking and finance professionals to discuss ways and means to reach that goal, HDFC Asset Management Co. Ltd came up with the idea of using the MF route to raise money.

In March 2011, HDFC Asset Management, India’s largest fund house with assets of over 1.09 trillion, launched a new scheme to help cancer patients. Called HDFC Debt Fund for Cancer Cure-1 (HCC1), the scheme invested in the fixed income market. Minimum investment in the three-year closed-end scheme was 1 lakh. HCC1 didn’t have a growth option; only a dividend option. Investors could either donate 50% or 100% of the declared dividend to ICS; the fund house would take care of the logistics. Donations were available for income-tax deduction under section 80G, and at the end of three years, investors would get their principal back. To maintain the principal, HCC1 invested in high-quality fixed income instruments and managed, in a way, like a fixed maturity plan. 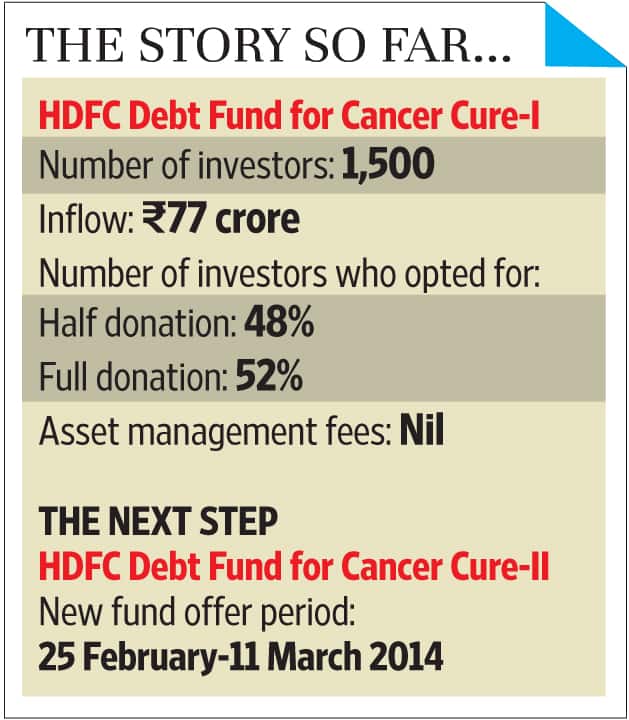 It was HCC1 and its investors who came to Gupta’s rescue and his treatment started at the Tata Memorial Hospital, just a few blocks away from ICS in central Mumbai.

Mumbai-based Gulzar Govewalla, 45, had invested 10 lakh in HCC1 in 2011. The former head of research at Blackstone, one of the world’s largest alternative asset managers and private equity groups, Govewalla took a sabbatical about two years ago when Blackstone sold its investment fund focused on Indian securities to Aberdeen Asset Management Asia. That gave her time to do things she had “always dreamt of but never really got the time". So, in between giving English lessons to 18-32-year-olds “who knew how to read and write English, but couldn’t speak it properly", and working with a few NGOs, she visited ICS. “I had spent a full day at ICS and came away quite impressed. They have a children’s wing for those who visit Mumbai from other towns for treatment; and rehabilitation programmes for cancer survivors," she says.

Milind Barve, managing director, HDFC Asset Management, says one of the biggest problems people face when giving charity is credibility of the entity that collects the money. “People often wonder whether the money would go into the right hands," he says.

HDFC AMC and ICS have tied up with eight oncology hospitals in India. The hospitals forward applications of needy patients to ICS, which then forwards the funds directly to the hospital, and not to the patients. The fund house also decided that only those patients whose family’s annual income was up to 1 lakh a year would be given help.

A due diligence team of prominent oncologists and ICS officials checks the medical aspects of the applications—the kind of treatment required, chances of survival, and so on. Its recommendations are then put forward before a higher level, called the governing advisory council, or GAC, (now headed by Usha Thorat, a former deputy governor of the Reserve Bank of India), which then takes the final decision. Barve, also a GAC member, says that a maximum of 4 lakh is given to one patient.

Smita Aggarwal, member secretary, ICS, says that an MF route of raising funds worked because it gave “a sense of surety of money coming in. Unless 3-4 lakh is to be given to a patient, we are not going to really make a difference. A donation of 5,000-10,000 is just a drop in the ocean." About 525 patients across India have benefited from HCC1, she adds.

The MF scheme, which attracted 1,500 investors, raised 77 crore as initial collection. Over the past three years, HCC1 generated a post-tax dividend of 10.87 crore, which was donated to ICS, according to the fund house. The final dividend, due in March 2014, could generate another 3 crore. While HCC1 ends in March 2014, the fund house is ready to launch the second tranche (HCC2), with an aim to appeal to a wider audience.

Minimum investment will be 50,000, down from 1 lakh earlier. In addition, says Barve, the fund house will match the amount that the scheme will raise through dividend donations. The cost structure of HCC2 will be among the lowest in long-term bond funds as the fund house would do away with many expenses.

As young Gupta continues his medication and gets ready for the next chapter of his life, Govewalla has already made up her mind to invest in HCC2 in March. Amid constant bickering about tough regulations, volatile markets and low inflows, even MFs can take a break sometimes and try to make a difference, instead.