New Delhi: A revival in job creation at India’s manufacturing and export-oriented sectors is unlikely soon, thanks to the lingering contraction in exports.

Job creation fell by a net 43,000 in three months ended 30 June from the previous quarter, said the 26th quarterly employment survey conducted by the labour ministry. The net fall in jobs created was the lowest since April-June 2009 (131,000) when global economic crisis was at a high, said the employment data. 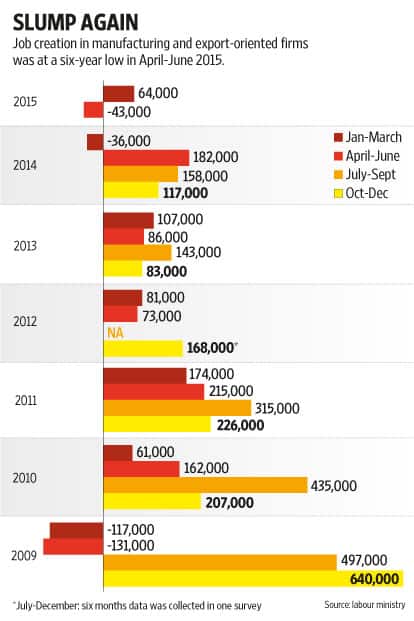 Since India’s exports are not growing, the impact on the job market may continue to be felt in subsequent labour bureau surveys.

Of the 43,000 net fall in jobs, export-oriented companies reported a decline of 26,000 and the rest were contributed by the non-export oriented companies. During the same quarter, merchandise exports in India contracted 16.75% year-on-year to $66.7 billion, according to the commerce ministry data.

When the quick quarterly employment survey was started in October-December 2008 by the labour bureau during the peak of global economic crisis, Indian factories reported a “net decrease in employment" by 500,000 jobs.

The quarterly survey was started then to gauge the impact of global economic crisis on India’s job market. The subsequent quarter (January-March 2009) witnessed a “net decrease in employment" by 117,000, according to the labour ministry data.

Since then, the labour bureau that functions under the labour ministry has been surveying eight key sectors of textiles, automobiles, leather, metals, gems and jewellery, transport, information technology (IT)/business process outsourcing (BPO), and handloom/powerloom sectors.

The metal sector did not add any new jobs and the leather sector created 8,000 new jobs. What is surprising is that employment in the textiles and IT/BPO sectors, which has been the lead job creators in the past one year, slumped in April-June, Mint reported on 9 December.

What is surprising is employment in the textiles and IT/BPO sectors, which has been the lead job creators in the past one year, slumped in April-June, Mint reported on 9 December.

“Big manufacturing industry promoters are waiting to get a clearer picture on GST (goods and services tax) after which more investment will happen. Since, projects and investments are on hold, job creation is sluggish in the export- and manufacturing-oriented companies," said Kanwar.