Airtel steps on the gas before Reliance Jio broadband launch

New Delhi: India’s largest telecom operator Bharti Airtel Ltd, which was so far a relatively small wired internet business, plans to push its home broadband offerings in new cities and also expand its network coverage within existing cities ahead of a likely commercial launch by Reliance Jio later this year.

“We have stepped up investments on home broadband. We do 400,000-500,000 home passes a year. Last year we did almost 2 million home passes," a person with direct knowledge of the matter said requesting anonymity.

The company aims to achieve another 2-4 million home passes in 2018-19 and expand in its key markets such as Delhi, Bengaluru, Mumbai, Kolkata and Chennai. 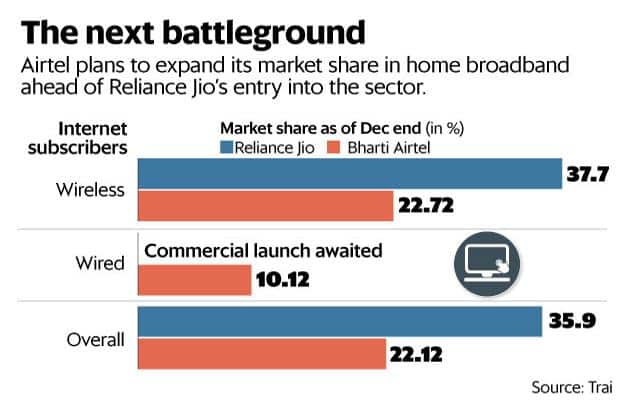 In the wired internet segment, fibre is distributed to the homes via an optical distribution frame with a single fibre dedicated to each customer’s home, which is termed a home pass.

A formal commercial launch of Reliance Jio broadband will shake up this segment and average revenue per user (ARPU) is expected to drop. The company has already initiated beta trials for its wired broadband service across regions in New Delhi and Mumbai, with unlimited internet at 100 mbps for a security deposit of Rs4,500.

“Airtel has under-invested in home broadband so far...the investment behind this segment will be in the ballpark range of few hundred crores out of the overall capital expenditure of $4 billion by Airtel in 2018-19," said the person cited above.

Last month, Airtel upped its game and introduced a new home broadband plan with speeds of up to 300 mbps at a monthly rental of Rs2,990 with 1,200GB of data. This plan comes with free subscription to Airtel’s OTT apps—Wynk Music and Airtel TV.