Govt wants new MRP stickers on pre-GST stock of products to prevent profiteering, but logistically that would be a challenge for consumer goods firms

Mumbai: Packaged consumer goods makers such as Dabur India Ltd, Marico Ltd and Godrej Consumer Products Ltd are worried about the impact of new guidelines issued by the government on displaying the maximum retail price (MRP) of products under the new Goods and Services Tax (GST) regime.

Aimed at ensuring that companies and retailers have a way of dealing with older (so-called pre-GST) stock, and preventing profiteering, the guidelines, announced on Tuesday, allow companies to print, stamp, or use stickers to show the new MRP on a product package. They also insist that companies issue ads in at least two newspapers if they are raising the prices of any products—and that they feature both the new (post-GST) and old (pre-GST) MRPs on the new packaging.

The companies are worried the first will make them break the rules of Legal Metrology Organisation, a state government department that oversees weights, measures, and price displays on packs. According to these, stickers aren’t allowed on top of the maximum retail price (MRP) and tampering with MRP is an offence. 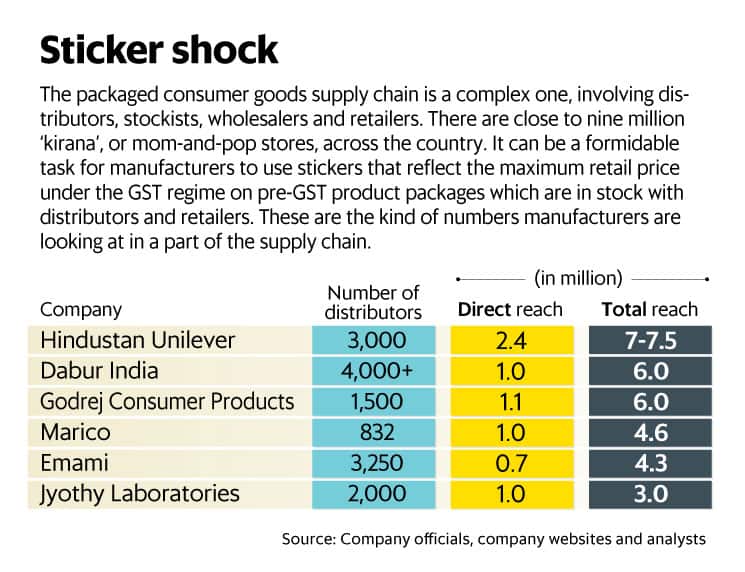 Logistically too, experts say, it will be a challenge for manufacturers who started billing under the new tax system to put the stickers on millions of packages that are already in the retail stores.

“For staple companies, putting new stickers on millions of packs is a challenge. It would be cumbersome to change prices of packs overnight," Abneesh Roy, senior vice president and research analyst (institutional equities) at Edelweiss Securities Ltd, said in a report on 5 July.

“This is a new googly thrown at us. The intent is good but logistically we have to figure how to manage it," said Vivek Gambhir, managing director and chief executive officer, Godrej Consumer Products. The maker of Cinthol soaps and Hit insecticides has over 1,500 distributors and 4,000 wholesalers who reach out to millions of small retail stores across India.

Likewise, Marico, the manufacturer of Parachute and Saffola oils, is also in the process of understanding the new requirement. “It’s confusing," said Vivek Karve, chief financial officer at Marico.

Hindustan Unilever Ltd, however, has no plans to take up the government offer to affix a sticker on pre-GST stock. “HUL manages its inventories tightly and hence we do not intend to avail the relaxation provided by the government to affix a sticker on unsold stocks as of 30th June 2017 to communicate price changes due to GST, if any. Our pricing actions have already started landing in the market and further changes should also land in the market in the coming days after factoring in normative lead times," said an HUL spokesperson.

Ideally, the government should have notified the use of stickers under The Legal Metrology Act, according to Safir Anand, senior partner at law firm Anand and Anand. Under this act, goods with stickers can be confiscated, he added. According to Anand, the challenge with stickers is ensuring authenticity as they can be tampered with.

Even in the case of new packaging, companies will have to go back to the drawing board and redesign their artwork and packaging to show old and new pricing.

“This can take a few days to a few weeks depending on the process of the individual companies," said Gambhir, adding that this will again cause delays in new goods reaching shop shelves as this change was announced only on Tuesday.

The new requirement, in conjunction with the anti-profiteering rule under GST, will deter companies from raising prices. Skin care and ayurvedic products, detergents, malt beverages, some biscuits, and paints have come under a higher tax slab in the GST compared to the erstwhile value added tax (VAT) regime.

“We will absorb the increased costs due to a higher tax rate under GST at least for this quarter. This could mean a hit of about 4% on our margins," said Vikram Agarwal, founder and director, GreenDot Health Foods Ltd, maker of the Cornitos brand of nachos.