Mumbai: Despite the rising clamour for an interest rate cut by the Reserve Bank of India (RBI), a number of bank economists and treasurers say that a reduction in interest rates is unlikely at the central bank’s next monetary policy review on 2 December.

A survey of 10 economists and bank treasurers showed that no one is expecting an immediate cut in interest rates, instead they expect RBI governor Raghuram Rajan to wait until there is more clarity on the inflation trajectory and global developments such as commodity prices and monetary policy in the US.

The earliest that a rate cut is being expected is in February. That’s when Bank of America-Merrill Lynch (BoA-ML) economists Indranil Sen Gupta and Abhishek Gupta expect RBI to begin its rate-reduction cycle.

The BoA-ML economists expect India’s economic growth to slow to 5% in the quarter ended September from 5.7% in June increasing the “need" for a rate cut. Stable oil prices and rupee and likely expenditure cuts by the government will also give room for RBI to cut rates in February, they said in a note dated 6 November.

Gaurav Kapur, a senior economist with Royal Bank of Scotland Plc, also expects RBI to cut rates in the January-March quarter as by then Rajan would have a “better sense" of any action the US Federal Reserve (Fed) could be contemplating.

A rate cut is on the horizon because Kapur views the recent downturn in inflation as “not a blip".

“The current downward trend in inflation is structured on the demand side and hence is more sustainable; even food prices, for example, prices of vegetable, are benign," Kapur said.

Consumer price inflation in India grew 6.46% in September, the slowest pace since this series was started in January 2012 and much slower than the 11.2% pace in November 2013 because of lower food and fuel prices.

Some like Indranil Pan, chief economist at Kotak Mahindra Bank Ltd, expect inflation to slow “closer to 5%" in October and November. Pan rules out a rate cut in December. 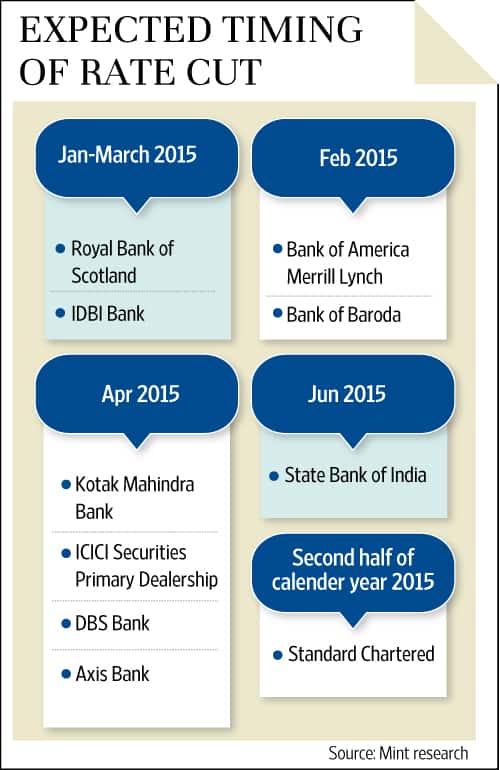 Economists point to RBI’s twin targets of bringing inflation below 8% by January 2015 and further to 6% by January 2016. While the near-term inflation target has been achieved, there is still some uncertainty over the medium-term target of 6%.

Speaking at a conference in Mumbai on Friday, RBI deputy governor H.R. Khan warned against prematurely celebrating the drop in inflation.

Khan noted that inflation has a “long way to go" in terms of input costs, the wage burden and food prices. “There are structural issues with regard to protein inflation and base effects and rural areas are also seeing inflation," Khan said at an event organized by industry lobby group Confederation of Indian Industry.

Standard Chartered Bank Plc puts the probability of a rate cut at “35% to 40%" and that too “only in the second half of calendar year 2015".

“The inflation trajectory we are projecting expects inflation to be above 6% by January 2016, which makes a rate cut difficult. Besides, a major reason for the current drop in inflation is lower global commodity prices, which could rise in a short time due to geopolitics or even because global growth is widely expected to recover in 2016," said Samiran Chakraborty, managing director and regional head of research, South Asia, at Standard Chartered.