Analysts lowered this year's earnings estimate for SBI by 1%, Bank of Baroda by 12% and PNB by 30%, even after taking account the first tranche of Modi govt's $33 billion recapitalization plan in their forecasts

Analysts including Rahul Jain lowered this year’s earnings estimate for State Bank of India by 1%, Bank of Baroda by 12% and Punjab National Bank by 30%, even after taking account the first tranche of Prime Minister Narendra Modi’s $33 billion recapitalization plan in their forecasts. Estimates for 2019 and 2020 were also reduced by similar amounts.

Potential risk aversion and a greater focus on operational controls after the fraud may hamper growth in the near term, the analysts wrote in a note to clients Wednesday.

“We lower our EPS estimates for SBI/BOB largely on the back of share dilution," they said. “On PNB we see a larger EPS decline as we lower growth after baking in the full impact of the fraud-related liability."

A $2 billion fraud at the bank that surfaced days after India’s largest lender posted a surprise loss has led to sharp declines in the National Stock Exchange’s gauge of state-run bank stocks. The index is down about 14% already this month and is on track to erase the sharp rally spurred by the government’s rescue plan announced in October. 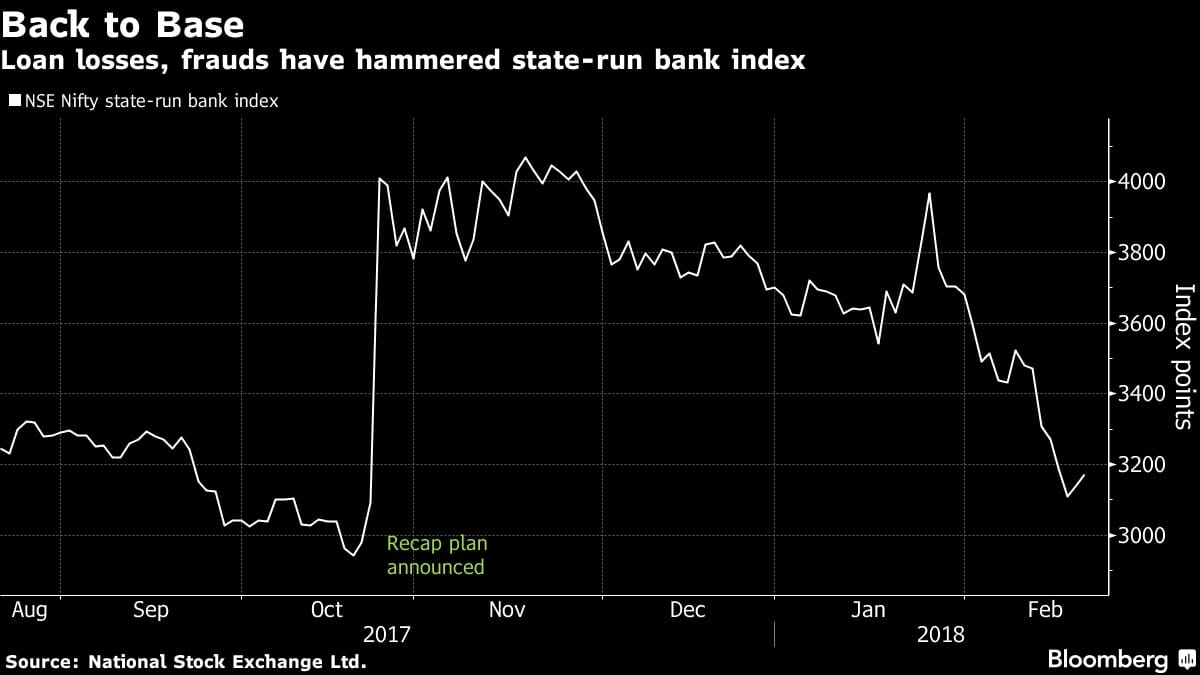 In all, Indian banks could take a hit of more than $3 billion from loans and corporate guarantees provided to diamond companies allegedly involved in the fraud at PNB, Reuters reported on Saturday, citing the tax department.

Still, despite the cuts, Goldman still sees upside for state-bank shareholders. Its new price targets offer upside of between 12 and 29%, according to the note.

Private lenders seem to be the major beneficiaries of the state-banks’ woes. Continued strong economic growth is leading to ongoing demand for funding and the private sector is seeking to accelerate its market share gains.

Signs of this are already appearing in the tightening trade-finance market for Asia’s third biggest economy. Banks have put in restrictions on issuing non-funded instruments within the state-owned lenders, which should benefit private banks in the short term, Jefferies LLC analyst Nilanjan Karfa wrote in note on Tuesday.

Privately-held HDFC Bank Ltd alone was valued at $74 billion at Wednesday’s close, versus the combined market value of $61 billion for the 12 banks on the NSE’s gauge. Bloomberg