Mountain View, California: It is a rare criticism of elite US university students that they do not think big enough. But that is exactly the complaint from some of the largest technology companies and the federal government.

At the heart of this criticism is data. Researchers and workers in fields as diverse as bio-technology, astronomy and computer science will soon find themselves overwhelmed with information. Better telescopes and genome sequencers are as much to blame for this data glut as are faster computers and bigger hard drives. 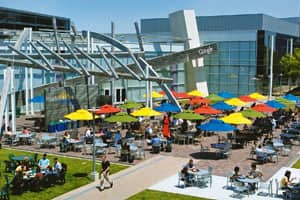 Mega-scale problems: The main courtyard of Google headquarters, California. By donating computing wares to universities, Google and IBM hope to train engineers and scientists to think in Internet scale.

The next generation of computer scientists has to think in terms of what could be described as Internet scale. Facebook, for example, uses more than 1 petabyte of storage space to manage its users’ 40 billion photos. A petabyte is about 1,000 times as large as a terabyte, and could store about 500 billion pages of text.

It was not long ago that the notion of one company having anything close to 40 billion photos would have seemed tough to fathom. Google, meanwhile, churns through 20 times that amount of information every single day just running data analysis jobs. In short order, DNA sequencing systems, too, will generate many petabytes of information a year.

“It sounds like science fiction, but soon enough, you’ll hand a machine a strand of hair, and a DNA sequence will come out the other side," said Jimmy Lin, an associate professor at the University of Maryland, during a technology conference held here last week.

The big question is whether the person on the other side of that machine will have the wherewithal to do something interesting with an almost limitless supply of genetic information.

At the moment, companies such as International Business Machines Corp. (IBM) and Google Inc. have their doubts.

For the most part, university students have used rather modest computing systems to support their studies. They are learning to collect and manipulate information on personal computers or what are known as clusters, where computer servers are cabled together to form a larger computer. But even these machines fail to churn through enough data to really challenge and train a young mind meant to ponder the mega-scale problems of tomorrow.

“If they imprint on these small systems, that becomes their frame of reference and what they’re always thinking about," said Jim Spohrer, a director at IBM’s Almaden Research Center.

Two years ago, IBM and Google set out to change the mindset at universities by giving students broad access to some of the largest computers on the planet. The companies then outfitted the computers with software that Internet companies use to tackle their toughest data analysis jobs.

And, rather than building a big computer at each university, the companies created a system that let students and researchers tap into giant computers over the Internet.

This year, the National Science Foundation, a federal government agency, issued a vote of confidence for the project by splitting $5 million among 14 universities that want to teach their students how to grapple with big data questions.

The types of projects the 14 universities have already tackled veer into the mind-bending.

Purdue looks to carry out techniques used to map the interactions between people in social networks into the biological realm.

Researchers are creating complex diagrams that illuminate the links between chemical reactions taking place in cells.

A similar effort at the University of California, Santa Barbara, centres on making a simple software interface—akin to the Google search bar—that will let researchers examine huge biological data sets for answers to specific queries.

Lin shares the opinion of numerous other researchers that learning these types of analysis techniques will be vital for students in the coming years. “Science these days has basically turned into a data-management problem," Lin said.

By donating their computing wares to the universities, Google and IBM hope to train a new breed of engineers and scientists to think in Internet scale.

Of course, it’s not all good will backing these gestures. IBM is looking for big data experts that can complement its consulting in areas such as healthcare and financial services. It has already started working with customers to put together analytics systems built on top of Hadoop. Meanwhile, Google promotes just about anything that creates more information to index and search.

Nonetheless, the universities and the government benefit from IBM and Google providing access to big data sets for experiments, simpler software and their computing wares.

“Historically, it has been tough to get the type of data these researchers need out of industry," said James C. French, a research director at the National Science Foundation. “But we’re at this point where a biologist needs to see these types of volumes of information to begin to think about what is possible in terms of commercial applications."