With more use of smartphones and better Internet connection, digital devices' influence on in-store purchases is expected to grow significantly

With the growing adoption of smartphones and greater number of Internet users in the nation, digital devices’ influence on in-store purchases is expected to grow significantly, highlighting the need for retailers to adopt an omni-channel strategy, according to a report by consulting firm Deloitte Touche Tohmatsu India Pvt. Ltd.

The report, Navigating the New Digital Divide, released on Monday states that close to 21% of the total shopping in India, or ₹ 60,000 crore of in-store retail purchase, was influenced by digital devices including desktop computers, laptops, netbooks, smartphones and in-store devices such as payment kiosks, mobile payment device.

“Digital has become a preferred medium to research. Typically, people used to walk in and discover products but now people walk in with digital discovery and we are seeing people use digital touchpoints post-buying as well to understand product features, etc.," said Rohit Bhatiani, director at Deloitte.

The report, which studied close to 2,000 urban Indian shoppers, said the conversion rate of shoppers who use a digital touchpoint is 40% higher than the non-digitally influenced shoppers.

It said that 66% of shoppers end up spending more as a result of using digital devices. “38% shoppers were observed spending at least 25% more," according to the report. Digital information, reviews, recommendations and online discounts or coupons influence shoppers to spend more. 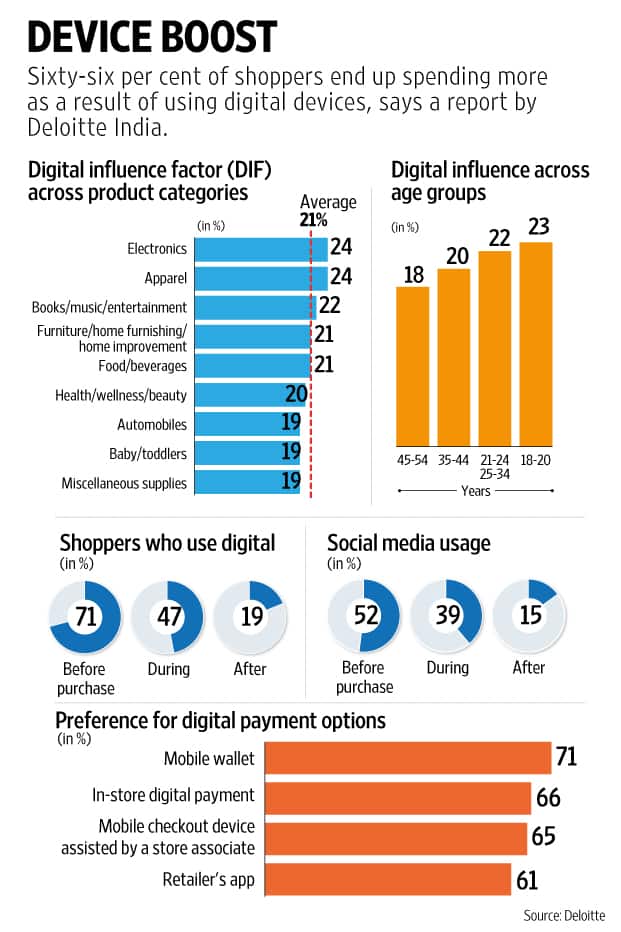 More than a third of digitally influenced shoppers would prefer the flexibility of buy-online-pickup-in-store, the report said.

“The consumer today is not looking at channels differently. He would want the flexibility of buying and returning the products from any channel," said Bhatiani. “Today, 90% of the retailers do not have a mobile app or mobile-friendly websites and hence these retailers are not even considered by consumers for pre-buying research. Retailers need to create a strong meaningful digital presence to attract customer attention," he added.

The report said facilitating a shopper’s digital interaction within the store or otherwise increases the probability of conversion for a retailer by as much as 50%.

Another critical factor is social media. According to the report, 52% of shoppers use social media before buying, 39% during the buying process and 15% after shopping. “Social media is very important for retailers to not only make shoppers aware of their offerings but also to get their feedback and learn about new trends. A positive and responsive social presence needs to be an integral part of retailers’ digital strategy," added Bhatiani.

The preference for using a digital medium for payments is also increasing among urban shoppers. Ninety-six per cent of digitally influenced shoppers are interested in using a digital device or touchpoint to make a payment in-store, as and when such payment options become available in the future, according to the report.

More than 70% of the users said they would prefer to use a mobile wallet, while 66% opted for in-store digital payment and 65% also wanted a mobile checkout device and help from a store assistant.