Mumbai: More than two-thirds of the pharmaceutical patents awarded by India in the last three years were granted to foreign drug makers such as
Pfizer Inc.
,
Novartis AG
and
F Hoffmann La Roche Ltd
, which have been critical of India’s intellectual property rights (IPR) regime.

The country issued 1,001 drug patents between April 2010 and March 2013, of which 771 were given to foreign drug makers, mainly from the US and Europe, according to data released last week by the Indian Patent Office (IPO).

US insulin maker and biotech researcher Eli Lilly and Co. won the most number of those patents in that period, securing 36 of them, mainly for biological products and compounds to treat diabetes and related diseases.

Eli Lilly was followed by Pfizer, the world’s largest drug maker, with 32 patents and Switzerland-based F Hoffmann-La Roche and Novartis, with 22 and 14 patents, respectively. French drug maker Sanofi SA and Germany’s Bayer AG, too, were granted at least a dozen Indian patents in the three years ended 31 March. 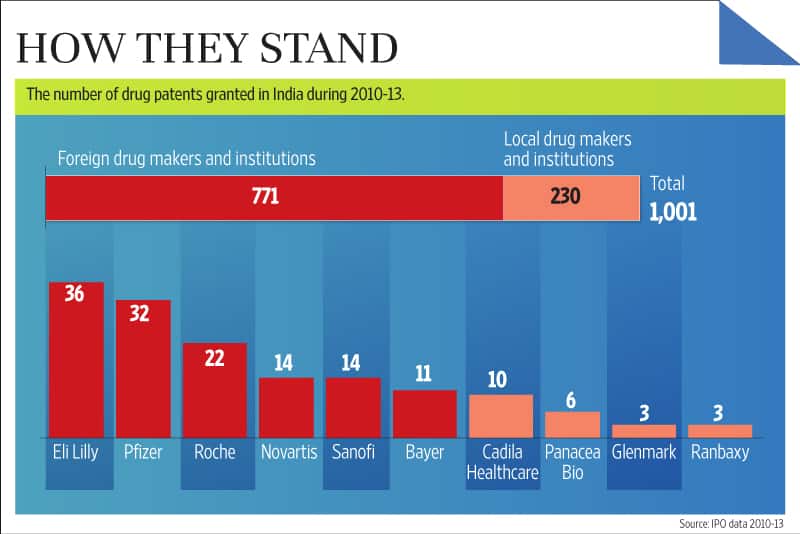 The patents, which cover inventions related to single molecules or groups of compounds or processes leading to development of various medicines, typically allow these companies exclusive marketing rights for such products for at least 15-20 years in India.

India, which follows a stricter patent regime than the US and European Union, has been at the receiving end of criticism for turning down several patent applications and revoking existing patents following judicial challenges filed by local as well as foreign rivals.

The country’s patent law, unlike that of the US and Europe, doesn’t allow patent grants for drugs invented before 1995—the cut-off year fixed when India reintroduced its product patent regime for pharmaceuticals in 2005 as a signatory to the World Trade Organization’s Trade-Related Intellectual Property Rights (TRIPS) agreement.

The reasoning was that previous inventions are already in the public domain and do not deserve a patent grant.

The country also doesn’t allow invention claims based on simple modification of already known drugs unless the new version is substantially superior in terms of treatment efficacy.

Multinational drug makers have been critical about these clauses in the Indian patent law.

Pfizer, in a May testimony to the US Congress, alleged that India lacks a conducive business environment mainly because of its poor IPR regime.

Novartis, which fought and lost a long-running patent case in India after the country rejected its patent application for blood cancer drug Glivec, had also criticized Indian law, saying it is non-compliant with the TRIPS pact, and stated that it is not comfortable about investing in the country.

Glivec is a crystal form of a previously known anti-cancer molecule, imatinib mesylate.

The government countered this claim.

“India’s patent law is fully compliant to its obligations to the international patent treaty and TRIPS and it doesn’t discriminate any genuine inventor from their rights," said Saurabh Chandra, secretary, department of Industrial Policies and Promotion, the administrative body that is responsible for IPR-related policies in India.

Chandra was addressing an audience in Delhi on the World Intellectual Property Rights day in February.