In aircraft engine development, you cannot set a timeline

In aircraft engine development, you cannot set a timeline

It has chosen French aircraft engine maker Snecma SA to jointly build an engine to replace Kaveri, a project named after the river in southern India. T. Mohana Rao, director of GTRE, a unit of the Defence Research and Development Organisation, explains why it had to choose a partner and talks about the future of the Kaveri programme. Edited Excerpts:

What is the status of the Kaveri engine development project? 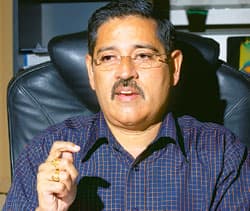 Does this mean the engine for the light combat aircraft would be further delayed?

In aircraft engine development, particularly when you are doing it for the first time, you cannot set a timeline. We could take five or six years. The Indian Air Force (IAF) cannot wait for an engine for that long, and the government said if there is any engine house that we can partner, we could go ahead and do a joint venture on risk-sharing basis.

Only NPO Saturn and Snecma responded of the five. General Electric Co., Rolls-Royce Plc. and Pratt and Whitney declined. Nearly two-and-a-half years after we started the process, we have identified Snecma. The government told us to consult IAF and decide on the air staff requirements before we sign a contract.

Has Snecma given a timeline for the new engine?

Snecma will bring its (engine) core that is named Eco. A core, which comprise a compressor, combustor and high-pressure turbine, is the heart of any jet engine. The engine will have less weight and more reheat thrust along with certain other changes to meet the original design intent. They will have a workshare of 45%, and ours would be 55%. Nearly 85% of the manufacturing would be within the country. The engine would be certified for fitting in the aircraft in around four years. Hindustan Aeronautics Ltd will produce the engine and all future aircraft engines in India would be from the joint venture.

But why so late? Couldn’t you have gone for a global partner much earlier and avoided delays?

It was a decision by the government. When Kaveri was conceived, India did not have a design base for aero engines, except for some work we had done earlier. Globally, they first pick an engine and then build the aircraft. Here, we decided that by the time the light combat aircraft was ready, we should have our own engine. The engine (supplied by General Electric) currently powering the aircraft is inferior to Kaveri’s specifications.

IAF wanted us to build a highly stable engine with a digital computer to control it, and a two-lane manual reversion (a backup for the first time in the world). Rolls-Royce and GE validated our design. Now we have a design base, huge infrastructure and talent pool in engines. We could not have built this if we had not taken up this project.

What will happen to Kaveri and the work you have done?

The core of Kaveri is performing well. Because of the lower thrust, it cannot be used on combat aircraft. It can be used to power unmanned combat aerial vehicles. We have already demonstrated a marine version of Kaveri using diesel as fuel for the Indian navy. It can also be used as a large 12MW industrial genset for power generation.