Sales grew uniformly across categories, including motorcycles, which had seen growth stagnate for a year

It’s the first time in several months that sales have grown uniformly across categories, including motorcycles and three-wheelers, sales of which had been slowing for more than a year. 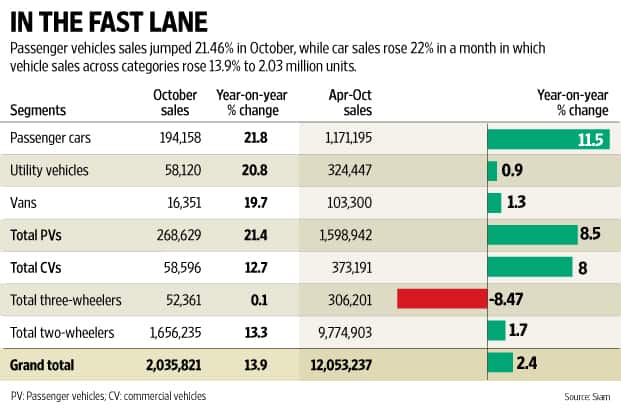 “The ongoing festive season had a positive impact on the passenger vehicle sales," said Vishnu Mathur, director general of Siam. “Passenger vehicles will not go back to the negative marks and will continue to improve, like heavy commercial vehicles. Light motor vehicles are also expected to be in positive territory soon."

“Heavy and medium commercial vehicles sales are rising due to replacement demand as well as on hope of a revival in the overall economy," said Abdul Majeed, a partner at PricewaterhouseCoopers India.

“Even freight demand is reflecting an upward trend, while LCV (light commercial vehicle) sales will also gradually pick up in the next few quarters. There are many favourable indicators to propel growth in the automotive sector such as low interest rates, pent-up demand across the segment and low fuel prices." said Majeed.

In addition, Dhanteras, the first day of the five-day Diwali festival period celebrated on 9 November, brought cheer to auto makers. Maruti Suzuki, Mahindra and Mahindra Ltd (M&M) and Hyundai Motor said retail sales on Dhanteras rose sharply from the day last year. For M&M, market leader in utility vehicles, it has been the best Diwali in three years. Pravin N. Shah, president and chief executive, automotive, at the firm, said the company despatched a total of 11,500 units on 9 November. This, he added, is 70% more than what the company despatched last year. Most of the volumes came from Uttar Pradesh, Bihar and Madhya Pradesh, and was led by TUV300, the new model it launched on 11 September.

Led by the newly-launched Baleno, among other models, Maruti Suzuki, too, saw its retail sales rise 25% to around 14,000-15,000 units in a single day, as compared with last year, said a company spokesperson.

Hyundai, the second largest in the pecking order, saw its deliveries increase 25% to 12,000 units, as compared with last year, mainly on the robust demand for the newly-launched Creta and i20 range.

“After a long time, we are seeing a resurgence in demand for compact car models," said Rakesh Shrivastava, senior vice-president, sales and marketing at Hyundai Motor.