New Delhi/Mumbai: Two days after registering the first chargesheet in the Rs12,636 crore Punjab National Bank (PNB) fraud case, the Central Bureau of Investigation (CBI) on Wednesday filed another chargesheet in the matter in the Mumbai sessions court, on the basis of a case registered on 15 February.

“The chargesheet has been registered for a total amount of Rs7,080.86 crore, covering 142 letters of undertaking (LOU) and 58 foreign letters of credit (FLC). It names 18 entities and individuals including the top PNB officials," said a person familiar with the development.

Along with Anathasubramanian, who was managing director and CEO of PNB from August 2015 to May 2017, Sharan and Rao were charged under section 409 of the Indian Penal Code (IPC) for criminal breach of trust and section 420 of IPC for cheating and Section 13(2) of the Prevention of Corruption Act for causing wrongful losses to the bank and criminal breach of trust to the public.

Calls and messages to Ananthasubramanian and Sharan were not answered, while Rao could not be reached for a comment. 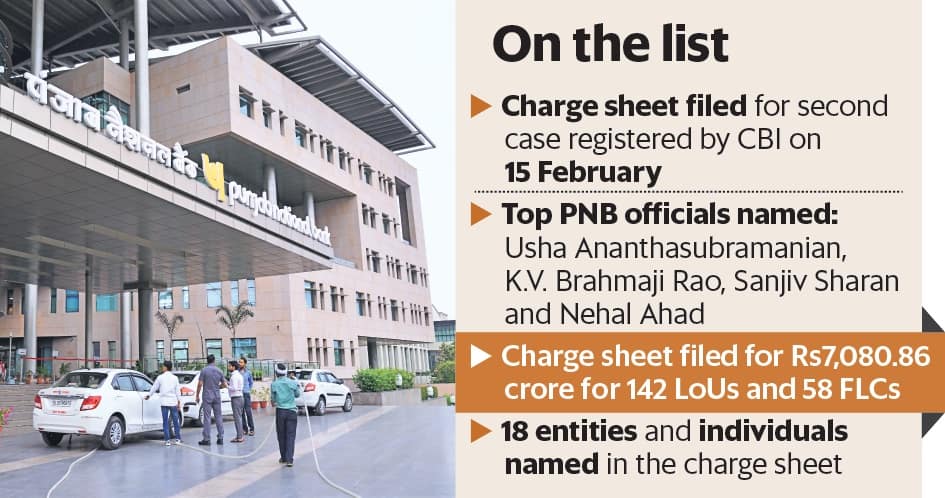 According to the second CBI chargesheet, excerpts of which have been seen by Mint, Gokulnath Shetty who was at the same post in the Brady House branch of PNB for seven years got kickbacks from Gitanjali Exports Corporation Ltd.

“Shetty during the period of 2015-18 debited an aggregate amount of ₹ 2.28 crore to the account of Gitanjali Exports maintained with PNB Brady House in which Mehul Choksi was Managing Director," said the CBI chargesheet.

The CBI chargesheet said that for crediting the sum, Shetty got ₹ 1.02 crore by way of cheques favouring him and his family members.

PNB officials including Ananthasubramanian, two EDs and Nehal Ahad had “omitted" to safeguard the interests of PNB in spite of a circular and caution notice and thereby had “facilitated" the fraud committed by others, said CBI in the 12,000 page chargesheet.

Out of the ₹ 7080 crore mentioned in the second FIR, the CBI chargesheet has so far found evidence in case of 6 foreign letter of credit (FLC) and 6 letter of undertakings (LOU) amounting to ₹ 512 crore in 12 transactions.

Remya Nair in New Delhi contributed to the story