India’s airwaves among the costliest in the world

New Delhi: The ongoing telecom spectrum auction completed 80 rounds on Wednesday, the 13th day of bidding, with the government set to raise a record revenue of at least ₹ 1.08 trillion, according to data published by the department of telecommunications (DoT).

The auction has already earned the government more than any of the four previous auctions—the highest before this one being the 2010 spectrum auction in the 2100 megahertz (MHz) and 2300MHz bands, which generated revenue of around ₹ 1.06 trillion for the government.

In all frequencies on offer, the per MHz cost of radio waves in this auction has already made Indian spectrum among the most expensive in the world, according to a Mint analysis based on data from researcher Analysys Mason.

“The FCC (Federal Communications Commission) raised a record $44.9 billion in the recent spectrum auction in the US which lasted for more than two months. The Indian government has already raised more than a third of it in 12 days. The industry has clearly shown the importance of spectrum in current times as the operators are doing every possible thing to get hold of spectrum at any cost," Hemant Joshi, partner, Deloitte Haskins and Sells, said on the comparison. The calculations do not take into account purchasing-power parity across countries or the population and geography that the airwaves are needed to cover.

“The bidding is taking place in all bands. The competitive bidding is expected to continue. There is still spectrum, which is yet to be sold," a statement from the government said. 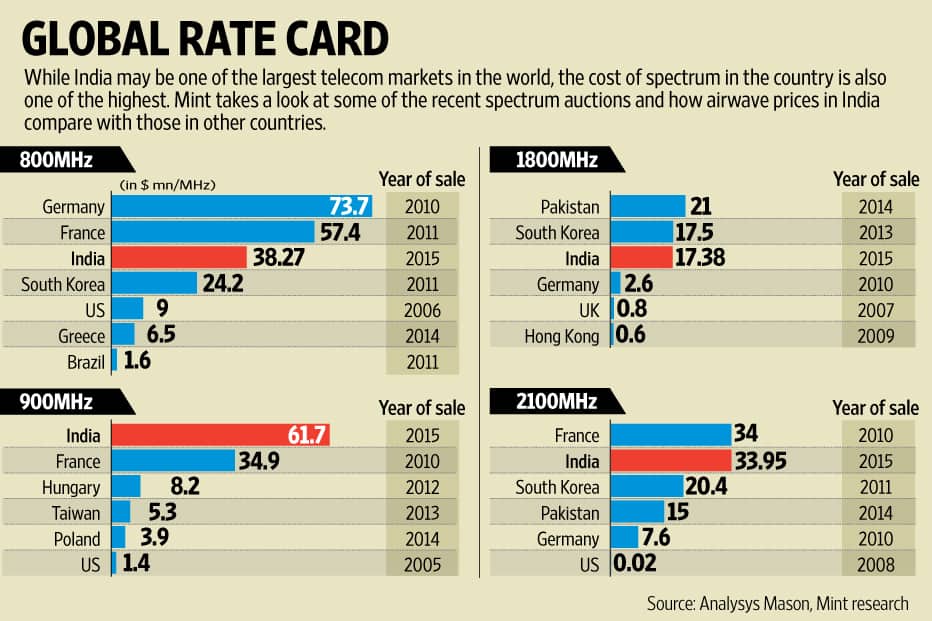 Already, the price for 800MHz band spectrum in Delhi has exceeded the price for 900MHz band spectrum in the same licensing area, continuing a trend first seen in Mumbai. The 800MHz band spectrum is expected to be used for FDD LTE (frequency duplex-Long Term evolution) version of 4G-based wireless communications services while 900MHz is expected to be used for 3G-based communications services as well as basic 2G services in low revenue areas. Both the bands are considered lucrative because it is cheaper to build a network. Similarly, 1800MHz spectrum is also needed for FD LTE and 2100MHz band is needed for 3G-based services, but both require much higher capital expenditure to build a network.

Some analysts say that the 2100MHz band will not get many bidders as the government is only selling one block of 5MHz in 17 circles. The government is expected to get another two blocks of this spectrum from the armed forces later this year, enabling another auction with more comfortable terms for the telcos.

India is the second largest and one of the fastest-growing telecom markets in the world by customers but in terms of revenue, it is far behind its global counterparts.

This can be seen from the fact that the average revenue per user (Arpu) across Europe is estimated at around $20-40 while in the US, it is closer to $50-70, for wireless communications services, according to the GSMA, a global GSM telecom association. In India, Arpus are less than $3.

India also has the highest number of telecom operators, around 10, leading to increased competition and difficulty on the part of the telcos to pass on the increased spectrum price.