Firm says India’s patent regime protectionist, but has been one of the top patent winners in pharma in the country

Mumbai: Pfizer Inc. may have sought intervention against India’s “protectionist patent regime" in testimony before a US Congressional committee in March, but the world’s largest drug maker is one of the top patent winners in the country’s pharmaceutical sector.

Pfizer has been granted 161 patents in India since 2005, when the government introduced its new product patent regime, according to records at the Indian Patent Office. French drug maker Sanofi SA leads with 333 patents, followed by Swiss pharma companies F Hoffmann La Roche Ltd with 243 and Novartis AG with 200.

The top eight multinational drugmakers in India have secured 1,504 patents since 2005 out of a total grant of 4,000 patents, the records show. 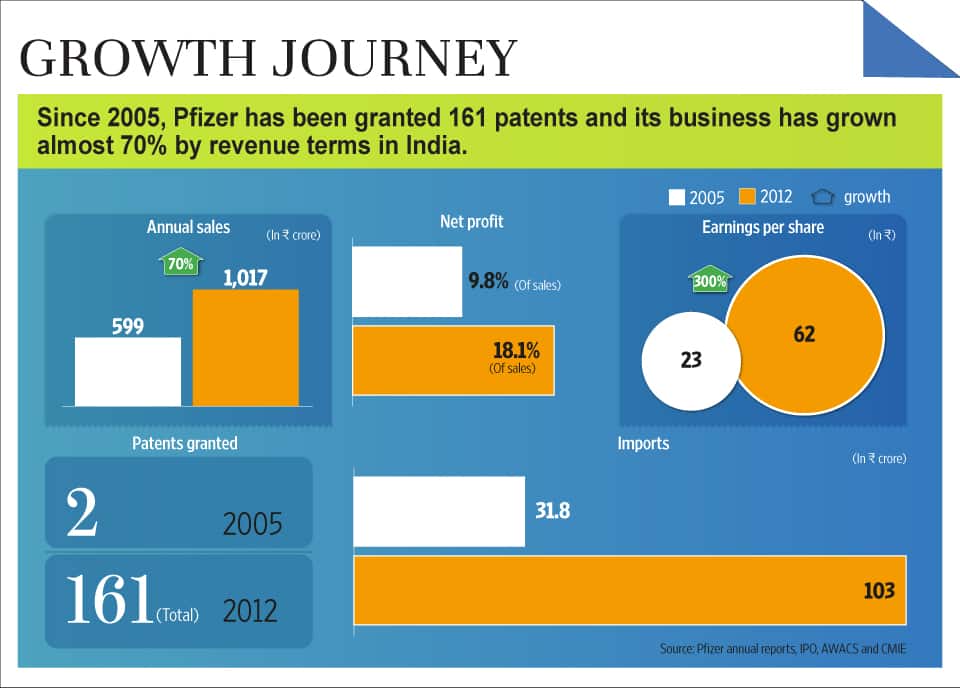 “The business environment (in India) for innovative industries has deteriorated significantly in recent history," Waldron said in the testimony, adding: “India has taken steps that call into question the sustainability of foreign investment and the ability of American companies to compete fairly."

Waldron added in his testimony that despite being a member of the World Trade Organization (WTO) and an important global trading partner, India “has systematically failed to interpret and apply its intellectual property laws in a manner consistent with recognized global standards, and it (Pfizer) has seen growing trend of anti-IP developments..."

Foreign drug makers have been spooked by some adverse regulatory rulings in India.

The country’s patent office, in a landmark decision in March 2012, granted a licence to Hyderabad-based Natco Pharma Ltd to make and sell a copy of Bayer AG’s liver and kidney cancer medicine on grounds that the drug patented by the German company was not fully accessible to local patients because of its cost and other reasons.

Earlier this year, Novartis lost a seven-year battle to win an Indian patent for its blockbuster anti-cancer drug Glivec with the Supreme court dismissing the company’s appeal. The case reached the courts after India denied a patent for it in 2006 on grounds that the drug wasn’t a new molecule.

Despite Pfizer complaining about “judicial flaws and (the) challenging investment climate" in India, its business grew almost 70% by revenue terms, according to its annual reports, from ₹ 599 crore in 2005 to ₹ 1,017 crore in 2012, and its market share grew 79% during the period much above the industry growth average of 52%.

“Pfizer stands by our earlier statements that highlight the importance of intellectual property protection for innovative pharmaceutical companies operating in India," wrote a Pfizer spokesperson on Thursday, in response to an emailed questionnaire on the issue.

The spokesperson added that counting the number of patent applications made and granted in India does not reflect the IP environment.

“It merely indicates the level of scientific activity in the country. The issuance of compulsory licenses and revocation of valid patents in India remain critical areas of concern as the patent-holders cannot enforce patents that have commercial significance," the spokesperson said.

Indian consultants do not agree.

“Contrary to the allegation of multinational companies, even many IP rulings coming out of the US and European courts are directly in line with Indian rulings as they have realized the value of striking a balance between rights and obligations of patentees unlike the past," said Gopakumar Nair, chief executive officer at GN Associates, a Mumbai-based patent consultancy firm.

But in March, India’s patent tribunal, the Intellectual Property Appellate Board (IPAB), ruled in favour of Pfizer reinstating its patent on cancer drug Sutent in the country. This was despite an earlier decision by the patent office to revoke the patent after Pfizer failed to prove the validity of its invention claims.

“Granting patents to deserving inventory claims is a strong indication of respecting intellectual property rights in full compliance with the TRIPS agreement. Since Indian standards for granting patents are stricter, it is all the more to the credit of the companies who win patents here," said a senior IP consultant with a foreign corporate advisory and audit firm. He did not want to be named.

TRIPS is short for trade-related aspects of intellectual property rights.

India’s domestic pharmaceutical industry in May reacted to Waldron’s testimony. It stated that “the country’s Parliament has amended its patent laws, consistent with its obligations under the TRIPS agreement, and Pfizer may have preferred the incorporation of TRIPS-plus provisions in the country’s patent law for pharmaceutical products, but that were a policy option for India, not a legal obligation."

Multinational companies and trade bodies from the US and some European countries have been lobbying for a TRIPS-plus provisions, including data exclusivity for patent holders and protection for even minor modifications of known drugs, to be enacted in developing countries such as India.

“We must not forget that big pharma played a huge role in shaping global trade and IP norms, and indeed even in conceptualizing TRIPS. With India refusing to cave into this carefully constructed global paradigm designed to ensure maximal profits, Pfizer’s biggest fear is that other countries will follow suit and break from the herd," said Shamnad Basheer, the ministry of human resource development chair on IP law at the National University of Juridical Sciences, Kolkata. “Diversity in IP policy is their biggest threat."

In June, some US industry lobbies and trade bodies including the National Association of Manufacturers, US Chamber of Commerce, United States Council for International Business, Pharmaceutical Research and Manufacturers of America raised concerns about India’s IP regime and its influence on other countries in a letter to US president Barack Obama.