Growth to be driven by key demographic changes such as 70% rise in income level, says study

India’s retail sector will double to $1.1-1.2 trillion by 2020 from $630 billion in 2015, riding on income growth, rapid urbanisation and more nuclear families leading to higher per capita consumption, says a new study.

The overall growth will be driven by key demographic changes. By 2020, there will be a 70% rise in the income level and 100 million more youths will enter the workforce, says the study titled ‘Retail transformation: Changing Your Performance Trajectory’ conducted by industry lobby Confederation of Indian Industry (CII) and consulting firm The Boston Consulting Group.

Nearly 35% of Indians will be living in urban areas and there will be a rapid rise in the number of nuclear families by 2020, says the report which will be officially launched on Friday. 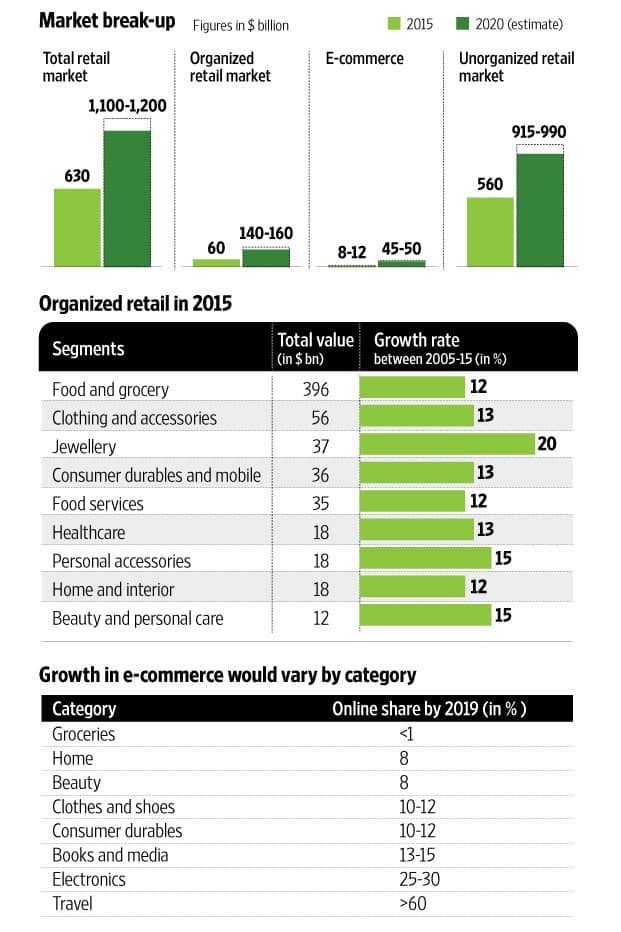 Also, urbanization will increase to 40% in 2020 from 31% in 2015 and more than 200 million households will be nuclear, representing a 25-50% higher consumption per capita spend, the February report said.

The study says that smaller towns will play a key role in the growth of e-commerce. In tier-II towns, the relevance of variety would increase, driven by lack of options in organized retail, it added.

Retailer will have to adapt to changes to integrate digitally influenced consumers in a better way, says the report adding that companies will have to build capabilities in omnichannel retailing, big data and analytics, information technology and supply chain. The study calls upon Indian retailers to take a strategic view of their opportunities and be clear about their aspirations. “With organized retail having potential to be close to 12-15% of the retail opportunity and e-commerce being $45-50 billion and potentially higher, Indian retailers would need to transform themselves to capture the massive opportunity," said Abheek Singhi, senior partner and director at BCG India.

In the past few quarters, most brick and mortar retailers, such as Croma, Future Group, which runs chains like Central and Big Bazaar, and brands such as Nike, Puma, Catwalk, Mango and Vero Moda have gone online through marketplaces like Flipkart, Amazon India and Snapdeal. At present, most brick-and-mortar retailers don’t have a good multichannel offering.

“With the expected exponential increase in digitally savvy consumers over the next decade, technology will play a key role in the development of the Indian retail sector. Retailers will have to adopt technology in both back-end and front-end, to bring the digitally savvy consumer into the mainstream retail fold," said Shashwat Goenka, sector head, Spencer’s Retail Ltd, RP Sanjiv Goenka Group.

With more disposable income, Indians are also likely to spend more on premium products, says Shailesh Chaturvedi, chief executive and managing director at Tommy Hilfiger Apparels India. “While e-commerce may be a ready answer, premiumization and upgradation of consumption may also be a very strong force going forward. With growth of the Indian economy, discretionary spends will rise faster and premium product will gain share, as seen in other emerging markets of Russia and China. Indian consumers will become more sophisticated, discerning and demanding and will be ready to pay bit more for their choices," he said.

The report also talks about the challenges ahead for brick and mortar retail. They include price sensitiveness of online consumers, steep competition with e-commerce, and lower bargaining power against suppliers and regulatory barriers. These factors may lead to lower profitability and return on capital for such retailers when compared with other sectors and global retailers, it added.