Annual revenue of Indian telecom firms declined for the first time since FY09 to Rs1.88 trillion in FY17 due to Reliance Jio's free offers, a CLSA report showed

The reason: the launch and aggressive pricing of Mukesh Ambani-promoted Reliance Jio Infocomm Ltd which has forced other telecom firms to cut prices.

The revenue of telecom firms is expected to recover to Rs1.87 trillion in 2018-19, marginally higher than that seen in 2014-15, the brokerage added. 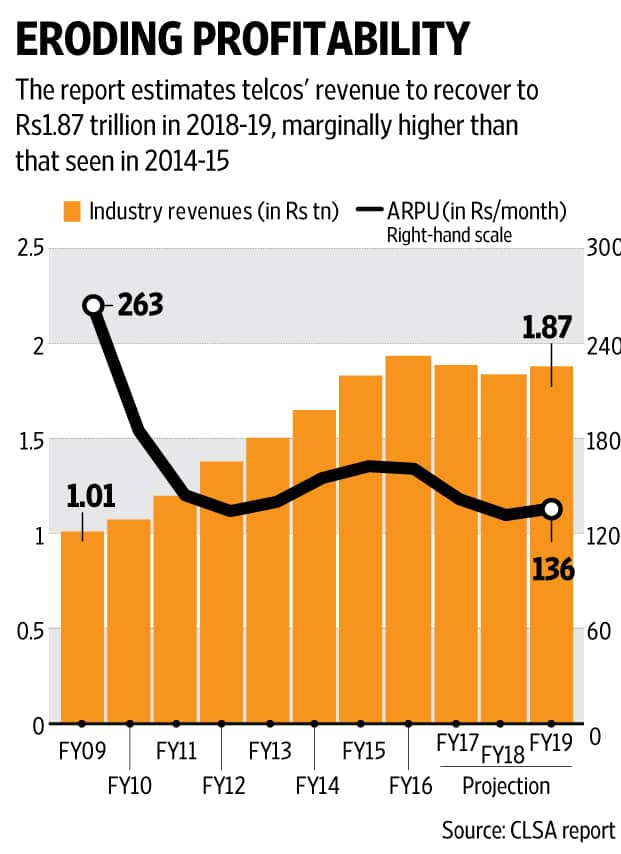 “Indian mobile sector revenues are declining, triggered by tariff wars between Reliance Jio and incumbents. Although Trai (the telecom regulator) has ended Jio’s latest free ‘Summer Surprise’ offer, subscribers who had already opted for the offer will still get its benefits, and incumbents’ latest offers will still dilute industry Arpu (average revenue per user) at the upper end of subscribers," CLSA analysts Deepti Chaturvedi and Akshat Agarwal said in the report.

An email sent to Reliance Jio remained unanswered till the time of going to press.

Rajan Mathews, director general of industry lobby body Cellular Operators Association of India, said that pressure on pricing will continue for several quarters as telcos scramble for market share (especially in data services) in a country where “it is a question of high volume and low margin".

Reliance Jio itself has a far more sanguine view. It estimates that revenue of India’s telecom industry will increase 50% from current levels to Rs3 trillion by 2021, largely driven by demand for data, while voice revenue will fall from Rs1.5 trillion to Rs0.5 trillion, according to an investor presentation.

On Monday, Rohit Chordia, an analyst with Kotak Institutional Equities, in a report titled Whose money is it anyway?, said that Reliance Jio is “an experiment in extreme capitalism and its brute-force-of-capital strategy, reflected in large capital deployment coupled with disruptive-as-it-gets pricing, has already resulted in massive impact on the industry—none bigger than forcing the number 2 (Vodafone India) and number 3 (Idea Cellular Ltd) players to consider a merger".

“Jio is perhaps trying to force an extreme endgame where it emerges as a super-dominant player. Generating returns seems to be an after-thought at this point," Chordia said in the report and suggested his investors stay “cautious" about the telecom sector.