Seoul: When a jury in San Jose, California, ordered Samsung Electronics Co. Ltd to pay $1.05 billion in damages for violating Apple Inc.’s patents for the iPhone and iPad, it did more than decide who had infringed upon whose intellectual property. To South Koreans, the legal battles that the two giants are waging across continents have highlighted both the biggest strength and the worst weakness of Samsung in particular and of their economy in general.

“The ruling makes us reconsider the brand value of Samsung because it depicts Samsung as a copycat," said James Song, who monitors Samsung for KDB Daewoo Securities in Seoul. “But a copycat or not, what Samsung has done with its smartphones was a brilliant move."

“Look what has happened to companies like Nokia, Motorola and BlackBerry, which didn’t do as Samsung did," Song added, referring to competitors whose failures to adapt quickly to the smartphone boom driven by iPhones have drastically reduced their market shares. “Samsung may lack in innovation, but right now, no one can beat Samsung in playing catch-up." 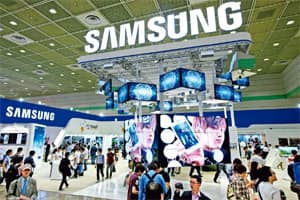 ‘Clever upgrading’: Although the name Samsung is synonymous with sophistication among South Koreans, the firm has never created a product so innovative that it has defined an era in consumer culture. Photo: SeongJoon Cho/Bloomberg

South Koreans took pride in the fact that Samsung, having already overtaken Sony Corp. and other Japanese companies it once mimicked, has now grown powerful enough to make Apple, the current icon of consumer electronics, feel threatened. But Samsung’s legal trouble was also seen as a referendum on the way Samsung—and, by extension, the South Korean economy—has done business.

Calling Samsung South Korea’s biggest, most profitable and most globally recognized brand barely explains the intense and often mixed emotions the name evokes among South Koreans. In Samsung, they see the crown jewel of their country’s transformation from a war-torn agrarian society into a global technology powerhouse.

Once an assembler of clunky transistor radios, Samsung is now the world’s top seller of smartphones and high-resolution television sets, as well as memory chips and flat-panel displays that let those devices and others store and display data. When they travel abroad, South Koreans say they feel proud to see advertisements for Samsung phones.

But Samsung always had an image problem, a stereotype that it tried to dispel through a patent tussle with Apple, the epitome of American innovation. Although Samsung may be pulling in more cash than ever—6.7 trillion won, or $5.9 billion, in profit on 47.6 trillion won in sales in the second quarter—it was seen not as an innovator but as an imitator, though a very efficient one, in products that it has eventually dominated.

Japanese companies have beaten rivals to the market with hardware innovations like flat-panel televisions and high-end mobile phones. Samsung waited for the others to test the market, and when it determined the time was right, it joined the fray to cash in.

Samsung’s strategy was to build something similar to another company’s product but to make it better, faster and at lower cost. When it pounced, it flooded the market with a wide range of models that were constantly updated with incremental improvements at a speed its rivals found hard to keep up with—a strategy best illustrated by its smartphone business. Heavy investments are not a problem; it once secured low-cost loans from a government-controlled banking sector friendly to big businesses and now draws on its own coffers, which are sloshing with cash.

Several years ago, Sony, Sharp and Panasonic were the first companies to market flat-panel televisions. But they obsessed over craftsmanship or held onto the old cathode-ray tube while dithering over the rival flat-panel technologies of plasma screen and liquid crystal displays, or LCDs. Samsung placed billion-dollar bets on mass production of television-size LCDs. Its economies of scale helped it drive down prices to create, then clinch the LCD television market.

Five years ago, Sony was the first company to make what is widely seen as the next-generation television. It featured the OLED display—organic light-emitting diode—which is thinner, more vivid and more energy-efficient. Sony was never able to mass-produce or market it; it was too expensive. Samsung and its domestic rival, LG Electronics Inc., tiptoed in, building mass-production capabilities by first making smaller OLEDs for high-end smartphones. Then last week, they pounced, announcing the marketing of 55-inch OLED televisions.

“Koreans do things quicker than almost anyone," said Tony Michell, author of Samsung Electronics and the Struggle for Leadership of the Electronics Industry. “This allows them to change models, go from design to production faster than anyone at the present time. Korean companies continually set themselves challenges, like the challenge to overtake Sony in terms of brand value in the past."

Samsung Electronics is the flagship of Samsung Group, a family conglomerate that controls more than 80 companies that build oil tankers and apartment complexes, run hotels and amusement parks and sell insurance to housewives and artillery pieces to the military.

The cultlike family control is often faulted for its opacity. But analysts say that also allows Samsung to place huge bets and do it quickly. Samsung makes not only hardware but also its components; it is Apple’s biggest parts supplier and its fiercest competitor in the completed smartphone market. In a way, its rivals help Samsung compete with them. Samsung’s handset business was its growth driver, raking in 20.5 trillion won in the second quarter.

The strategy worked well for the latest product it dominated—smartphones—until Apple declared war over intellectual property in April 2011, accusing the South Korean company of “slavishly copying" the feel and look of its iPhone and iPad.

After the court victory, Apple lawyers sought injunctions against sales of Samsung Galaxy smartphones and tablets in the US market.

But those products had already lived through their life cycles in Samsung’s fast-paced marketing plan, analysts and Samsung officials said. With characteristic speed, Samsung had already retooled its latest Galaxy S III smartphones to stay ahead of the patent battle—removing, for example, the function that makes the screen “bounce back" after being pulled to the end of a page.

Indeed, Samsung appeared to consider the legal trouble a necessary cost of squeezing out a giant in yet another field it is fast dominating. Samsung’s smartphone sales in the second quarter grew 150% to 50.5 million units, or a record 35% of the market, according to the research firm Strategy Analytics. Apple grew 28%, to 26 million units. It will attempt a surge back with its new iPhone 5 this year, but then Samsung is ready to roll out the Galaxy S IV as a counter.

“The patent ruling and Samsung’s copycat image will have a negative impact on Samsung’s sales of cellphones and other products," said Kevin Lee, an analyst at Korea Investment and Securities. “But Samsung will further widen the gap with Apple in the third quarter, though not as much as expected before the ruling."

Song said the fight for the smartphone market was over and had been decided in Samsung’s favour.

“Samsung can afford to lose many times because it can always innovate round particular roadblocks, but Apple cannot afford to lose even once, especially in the United States," Michell said.

“The account of how Apple created the iPhone round the kitchen table, which came out in the trial, shows it to be the very opposite of Samsung, which has a large army of researchers working on every aspect. A lot of commentary that the loss of the case in San Jose would set Samsung back misunderstood that Samsung would already have backups and alternatives by the time the trial ended."

In South Korea, where people saw their security as a nation resting on their economy and where Samsung’s achievements are a source of national pride, many perceived a bias against a foreign competitor in the US jury verdict.

“The impartiality and professionalism of the jury are questioned as all of the jurors live near Apple headquarters and lack sufficient technological knowledge to have insight into the issues," the conservative daily Dong-A Ilbo said in an editorial last week. “In a nutshell, Apple is an American company while Samsung is not, and the American jurors were not IT gurus."

It quoted a local blogger who criticized Apple’s so-called “trade dress" design patent on “rectangles with rounded corners": “All wheels are round. If Apple had first made a car with wheels, we wouldn’t be able to use a car with round wheels."

Still, the ruling reminded South Koreans of something their country painfully lacked, a shortcoming magnified by comparisons between Samsung and Apple.

Although the name Samsung is synonymous with sophistication among South Koreans, the company has never created a product so innovative that it has defined an era in consumer culture, like the Sony Walkman or the Apple iPhone.

“Copying and clever upgrading are no longer viable," the daily JoongAng Ilbo, the International Herald Tribune’s publishing partner in South Korea, lectured in an editorial. “Samsung must reinvent itself as a first-mover, despite the huge risks involved in acting as a pioneer, if it hopes to beat the competition."

Although rancour has run high at home against Samsung and other family-controlled conglomerates, which are often accused of corruption and of stifling smaller entrepreneurial companies, the conglomerates could always depend on a buy-Korean mentality. But scenes of young South Koreans lining up to buy iPhones and iPads provided Samsung with a painful reminder of what it did not have.

Samsung is appealing the US verdict, which it called “a loss for the American consumer".

“Apple continues to resort to litigation over market competition in an effort to limit consumer choice," Samsung said on Saturday, according to Reuters. “We will continue to take the necessary legal measures to ensure the availability of our innovative products in the United States."