Equis looks to sell its power platform in India Hydreq for Rs2,000 crore

Hydreq has a controlling stake in two hydroelectric plants in Sikkim

“Equis has started a process to hire an investment bank for the same. They have met with several bankers and are expected to appoint one soon," said one of the two people cited above, requesting anonymity as the talks are private.

The sale of the hydroelectric power platform could likely fetch Equis up to Rs2,000 crore, he added.

Singapore-based Equis declined to comment on the Hydreq sale.

Equis is a major investor in infrastructure and real estate in the Asia-Pacific region. Since 2011, Equis has raised over $2.7 billion in private equity and has successfully completed investments in 10 Asia-Pacific countries.

Equis was recently part of the largest renewable asset merger and acquisition (M&A) transaction, when it sold its renewable energy platform Equis Energy. 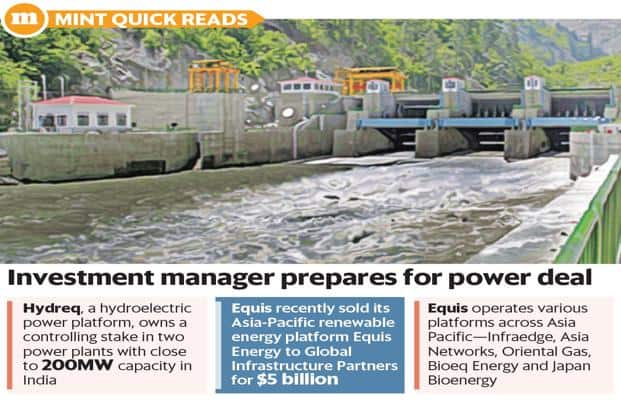 In January, Equis announced the closure of the sale transaction of Equis Energy to Global Infrastructure Partners (GIP) and its co-investors, for an enterprise value of $5 billion (including assumed liabilities of $1.3 billion).

Equis Energy is the largest renewable energy independent power producer (IPP) in the Asia-Pacific region (APAC), with more than 180 assets comprising 11,135 MW in operation, construction and development across Asia Pacific, including Australia, Japan, India, Indonesia, the Philippines and Thailand.

In India, Equis Energy owned 974 MW of wind and solar power assets, developed and under development.

Equis is also present in India through another of its platform Infraedge, which has partnered with Assetz Property Group to develop community townships in India. The platform owns a 2,069 unit township spread across 26 acres in Bangalore.

The investment management also operates several other platforms across the Asia-Pacific region.