Home / Industry / How employee-friendly are Indian companies?
Back
Share Via

How employee-friendly are Indian companies?

Mumbai: The India Responsible Business Index (IRBI) 2016, scheduled for release on Tuesday (14 February), seeks to draw attention to the need for companies to extend employee policies to include all workers who are part of extended supply chains, including labour and contractual workers.

The 2016 index, a collaborative effort by a group of not-for-profits—Oxfam India, Corporate Responsibility Watch, Praxis and Partners in Change—measures the performance of the top 100 firms on BSE by market value under various heads, including social inclusion.

In its second edition, the index measures performance on five parameters—inclusive supply chain, community as stakeholders, community development, employee dignity and human rights, and non-discrimination at the workplace (See ‘Methodology and disclosures’ below).

The index shows that there has been some improvement in the way companies treat their employees. Of the total 100 firms reviewed in 2015, 73 had an anti-sexual harassment policy in place. This number has risen to 92 in 2016. Similarly, in 2015, only 41 firms had policies regarding the recognition of the collective bargaining principle, but in 2016 this has gone up to 59.

ALSO READ | What does it take to be an ethical company in India?

Other aspects of employee dignity, however, show a decline. According to IRBI, the enforcement of non-discriminatory practices at the workplace has declined in 2016. In 2015, 99 firms were assessing diversity in the workforce but only 94 were doing so in 2016. Twenty firms were offering social benefits to contractual employees in 2015. This is down to 18 in 2016. 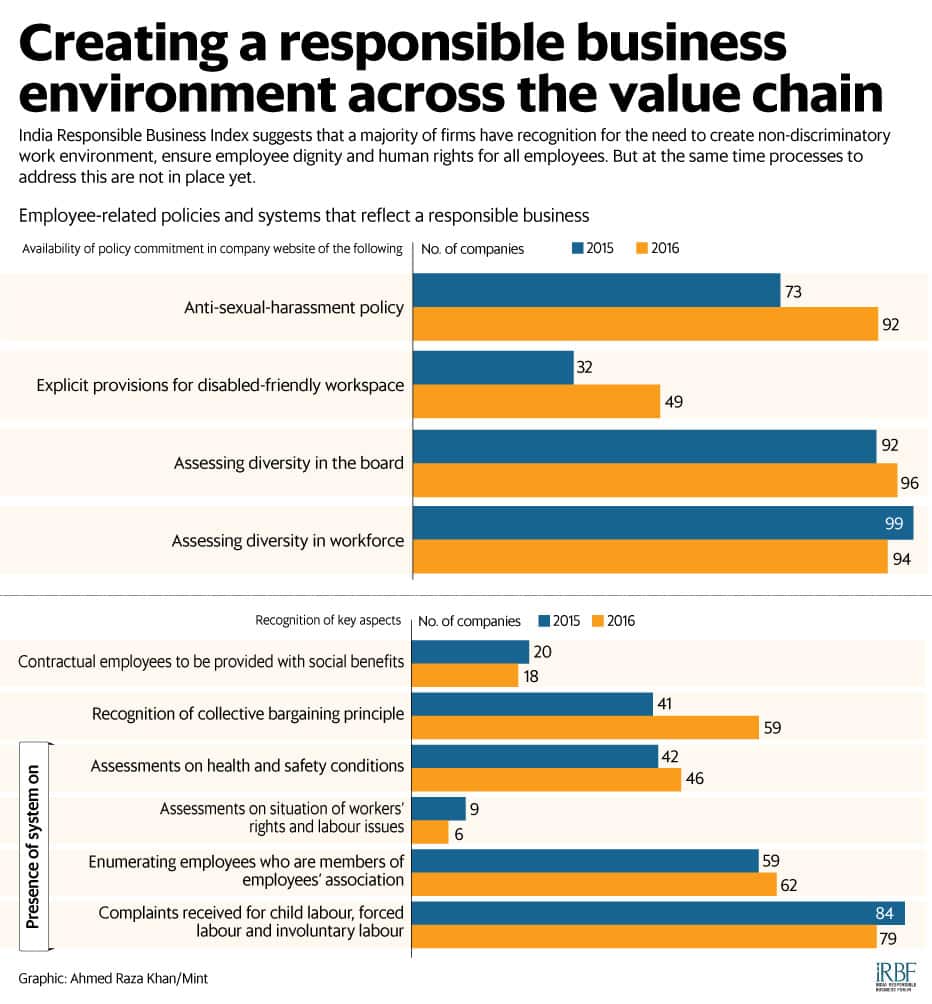 Those working in areas of employee dignity, human rights and non-discrimination say few firms look beyond employees on their payroll. Tom Thomas, chief executive at Praxis Institute for Participatory Practices, said the glaring gaps in existing policies of firms pertain to differentiation between regular workers—those on the roster—and contractual workers, labour and those associated with the business in its extended supply chain.

“Even though there may be comprehensive HR (human resources) policies that a majority of firms follow for their own employees,they do not extend this to the supply chain or even contractual workers," he added.

Thomas said often the most vulnerable and marginalized sections of the community are part of the extended supply chain of the businesses and therefore it is important for firms to address their needs as responsible businesses.

Citing IRBI, which indicates that barely 11 firms have a system in place to ensure “fair living wages", Thomas said, “Firms need to start viewing employees—across the value chain—as assets and not liabilities."

S.V. Nathan, chief talent officer and partner at Deloitte India, said, “Any responsive and responsible organization (business) must strive to extend employee dignity, human rights and well-being to the whole value chain." He, however, added that firms can only attempt to influence vendors and contractual workforce, and not force them to adopt these policies.

Nathan said the adoption and extension of such policies depend on the maturity and longevity of an organization. “Vendors, contract workers and other parts of the value chain should be extended the same best practices as the organizations—but this will come with maturity and though we are getting there, there is still a long way to go," he added.

Citing the example of its six-and-a-half month maternity leave policy that Deloitte implemented even before the government legislation, Nathan said this aspect of employee well-being cannot be extended to the whole value chain easily. But Deloitte attempts to ensure gender diversity at the workplace and is in talks with its vendors to do the same by hiring more women. There are examples of best practice among Indian firms, they cannot be extended to everyone all-at-once, he added.

Some companies keep employees involved in other aspects of conducting business responsibly.

For instance, Guruprakash Sastry, regional manager (infrastructure) at Infosys Ltd said employee engagement is critical to the sustainability initiatives of the IT firm. “When we decide to take leadership in any field, we are able to scale it manifold because we directly impact and influence our employees," he said. For instance, Sastry said, the company had targets of reducing energy and water consumption and had succeeded in doing this over the last eight years because of the involvement of employees.

Sastry said in one million square feet of space at any given Infosys office, the energy consumption is 3.5 megawatts (MW), while the market average is around 7-10 MW. He said sustainability targets and policies at Infosys apply to workers across the supply chain.

The India Responsible Business Index 2016 is based on self-reported and publicly available disclosures of the top 100 BSE-listed firms by market cap as on 31 March 2015. The information provided has not been externally validated.

Data from annual, business responsibility and corporate social responsibility reports, and any other company policies, published until 31 October 2016, has been used to answer 116 questions.

The firms have been graded on five parameters: Non-discrimination at the workplace, respecting employee dignity and human rights, community development, inclusive supply chain, and community as business stakeholders.

Each company’s policy commitments have been measured against the National Voluntary Guidelines on Social, Environmental and Economic Responsibilities of Business.

The answers were sent to the companies for verification by 15 January 2017.