Utility vehicle sales grow 36% in July due to GST benefits

New Delhi: In what could be a one-off instance, yet a significant one, sales of utility vehicles grew 35.52% in July as buyers took advantage of reduced prices owing to the implementation of goods and services tax (GST) from 1 July.

Sales of utility vehicles grew to 86,874 units in July from 64,105 units in the year-ago period, data provided by Society of Indian Automobile Manufacturers (Siam) shows.

This phenomenon, however, may not get repeated in the coming months since the government has proposed a policy change that seeks to increase the cess on luxury cars to 25% from 15%. That is over and above the GST of 28% that luxury cars already attract. 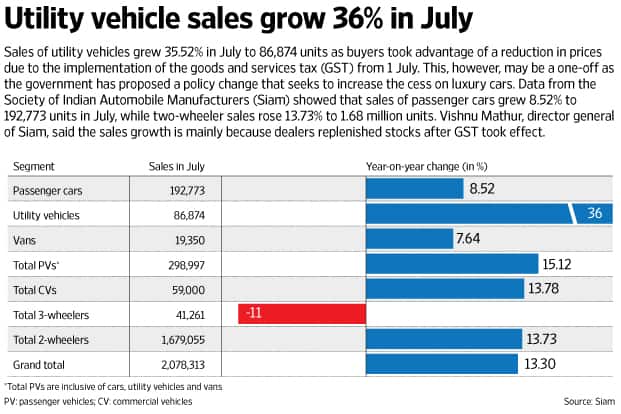 The move has irked the makers of sports utility vehicles (SUVs) and luxury cars and they are protesting the GST Council’s plan to raise the cess, warning that the move will lead to production cuts and job losses and dent the “Make in India" initiative.