Four months after acquiring an e-book retailer, Barnes and Noble Inc. (B&N), the world’s largest chain of bookstores, is starting its own mega e-bookstore on its website, BN.com.

In an announcement on Monday, B&N said that it would offer nearly 700,000 books that could be read on a wide range of devices, including Apple’s iPhone, the BlackBerry and various laptop or desktop computers.

When B&N acquired Fictionwise in March, that online retailer had about 60,000 books in its catalogue. 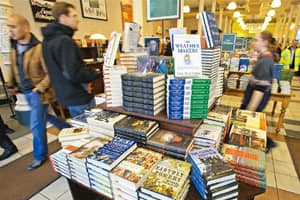 New vistas: A Barnes &amp; Noble store in New York. Nearly 500,000 of the books offered electronically on its website can be downloaded for free. Adam Rountree / Bloomberg

B&N is promoting its e-bookstore as the world’s largest, an implicit stab at Amazon.com, which offers about 330,000 for its Kindle device. Currently, Google’s public domain books cannot be read on a Kindle.

The number of e-books available on BN.com compares with 1.2 million in stock that can be bought in print form from the company’s website.

An additional one million books can be ordered from BN.com in the print-on-demand format.

William J. Lynch, president of BN.com, said the company would continue to sell e-book versions of best-sellers and new releases—defined as a new e-book for the first six months of its availability—for $9.99 (Rs482.52). That charge has become the de facto e-book price since Amazon.com set it for Kindle sales.

E-book pricing has become one of the most delicate topics in book circles. Publishers are concerned that by selling new books at such low prices, e-book retailers will undercut sales of hardcover editions, which average about $26, and eventually erode publisher margins.

“The pricing policies won’t remain static," Lynch said in an interview. “We’re working with our publishers on various pricing models. As the pricing model evolves over time, we will adjust."

David Young, chief executive of the Hachette Book Group, the publisher of blockbuster authors such as James Patterson and Stephenie Meyer, was cautious about B&N’s latest step.

“I’m thrilled that another major player is entering the fast-emerging e-book market," Young said. “But I remain deeply concerned that our most valuable front-list titles are being sold at mass-market paperback prices," he said, referring to the small format paperbacks that usually come out a year after a hardcover is released.

B&N also announced an upgraded version of its eReader software that users could download free from its website, making it possible to read any e-book bought on BN.com on various devices. Electronic books bought at BN.com cannot be read on Sony’s Reader or on the Kindle.

The retailer also said that when Plastic Logic Ltd released its electronic reading device in early 2010, B&N would operate a bookstore for e-books that would work on the new device. Lynch declined to say whether B&N would sell the actual device.

Sales of e-books remain small, but are growing fast. According to a survey by the Codex Group, a book marketing research firm, 4.9% of books sold in May were in digital form, up from 3.7% in March.

Sarah Rotman Epps, a media analyst with Forrester Research in Cambridge, Massachusetts, said BN.com was unlikely to dent Amazon.com’s Kindle sales. “I don’t think they will be stealing market share from Amazon," she said. “If anything I think they are contributing to the growth of the whole category of digital reading."

Rotman Epps added that as more consumers begin reading digital books on phones and other mobile devices, it made sense to market to those readers as opposed to those who are buying dedicated reading devices such as the Kindle or the Sony Reader.