Average salary hike to be 9.4% in 2018 at Indian companies: Aon Hewitt survey

But key talent are expected to get an average salary hike of as much as 15.4% as companies increase focus on performance, shows an Aon Hewitt survey

New Delhi: Employees in India are likely to get an average salary hike of 9.4% 2018, same as 2017, while key talent are expected to get appraisals of as much as 15.4% as companies increase focus on performance.

HR consultancy Aon Hewitt’s annual Salary Increase Survey, that analysed data across more than 1,000 companies from over 20 industries, said the average salary for India Inc stands at 9.4% this year.

Aon Hewitt believes average pay hikes in India will remain between 9.4-9.6%. As per the survey, companies in India gave an average pay increase of 9.3% during 2017, marking a departure from the double digit increments given by organisations since the inception of this study. 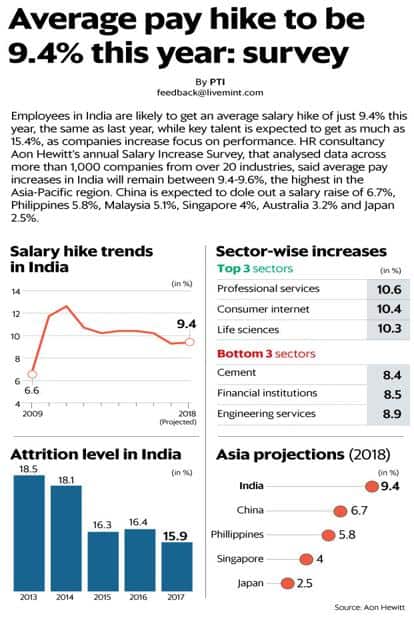 Even as salary hike remained at the same level on a year-on-year basis, India continues to lead the Asia-Pacific region. China is expected to dole out a salary raise of 6.7%, Philippines 5.8%, Malaysia 5.1%, Singapore 4%, Australia 3.2% and Japan 2.5%.

The survey noted that the focus on performance is getting sharper year-on-year.

A top performer is getting an average salary hike of 15.4%, approximately 1.9 times the pay increase for an average performer.

Ghose further said that “with increasing maturity, HR budgets are being realigned towards top performers as opposed to the broader population".

Despite an improvement in macro-economic forecasts—salary hikes remain at the same level as was projected in the last fiscal and this is because salary increases are becoming more “nuanced". “We are increasingly seeing a multitude of factors impacting salary increases such as size of the company, business dynamics within the sub industry, nature of talent requirements and quite obviously, performance," Ghose said.

Meanwhile, attrition rate in India is seeing a continuous downward trend as the overall attrition has come down from an average of 20% in the previous decade to 15.9% in 2017.