Motorcycle sales, though advancing at the slowest pace in seven months, rose 15.2% to more than 1.22 million units during the month because of wedding season demand, according to monthly sales data released by industry lobby Society of Indian Automobile Manufacturers (Siam). 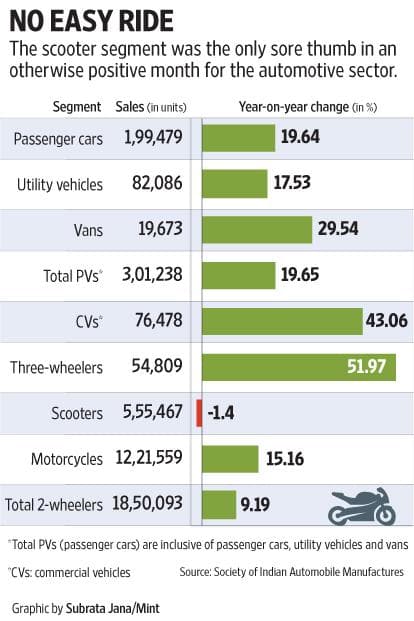 The development augurs well for motorcycle makers, such as Hero MotoCorp. Ltd and Bajaj Auto Ltd, which had witnessed declining market share through FY18.

Motorcycle sales had taken a hit due to a prolonged slump in rural demand, where customers prefer cheaper motorcycles compared to urban India’s penchant for gearless scooters.

Auto makers refrained from filling inventory channels to the maximum in anticipation of a fall in retail demand, said Sugato Sen, terming it an “inventory correction". Sen added that a revival in rural demand is reflecting in motorcycle sales.

Sen, however, expects scooter sales to rebound in June, since they have been witnessing a larger contribution from semi-urban areas in recent times.

The scooter segment was the only sore thumb in an otherwise positive month for the automotive sector.

Sales of passenger cars and utility vehicles grew 19.6% and 17.5%, respectively, on the back of a low base in May and June last year.

Car buyers had delayed their purchases in anticipation of a price decline post the implementation of the goods and service tax (GST) on 1 July last year. New launches and facelifts also contributed to sales during the month. Passenger car sales expanded at a faster clip than utility vehicles after a period of at least 40 months, owing to more upgrades.

However, higher fuel prices and its impact on inflation remained a key hurdle, and may have hurt sales of two-wheelers and entry-level passenger cars, according to Binaifer Jehani, director, Crisil Research. Though Siam is also cautious about higher crude prices, it expects personal vehicles to grow in the high-single digits this fiscal, Sen said.

Sales of commercial vehicles rose 43% to 76,478 units largely due to a low base prompted by substantial sales before the Bharat Stage-IV (BS-IV) emission norms came into effect on 1 April last year.

A fall in production of BS-IV-compliant vehicles had also caused a slump in sales last year.

Top commercial vehicle makers, such as Tata Motors Ltd and Ashok Leyland Ltd, expect truck and tipper sales to sustain the momentum they had gained in fiscal 2018 for another two to four years on the back of a broad-based economic recovery. The government’s sustained infrastructure development drive, stricter implementation of overloading rules and a strong movement towards higher tonnage vehicles owing to their low operating costs, may also contribute to the sales figures, Mint had reported on 8 June.