The maximum period for porting currently is seven working days, except in Jammu and Kashmir, Assam and the North-East, where it is 15 working days

New Delhi: Switching to another mobile phone operator is set to become a quicker process and operators will have fewer discretionary powers to scuttle a porting request, according to new mobile number portability guidelines currently in the works.

The Telecom Regulatory Authority of India (Trai), which issued a consultation paper in April to review guidelines on number portability, is ready with the new draft norms, a senior official at the regulator said. 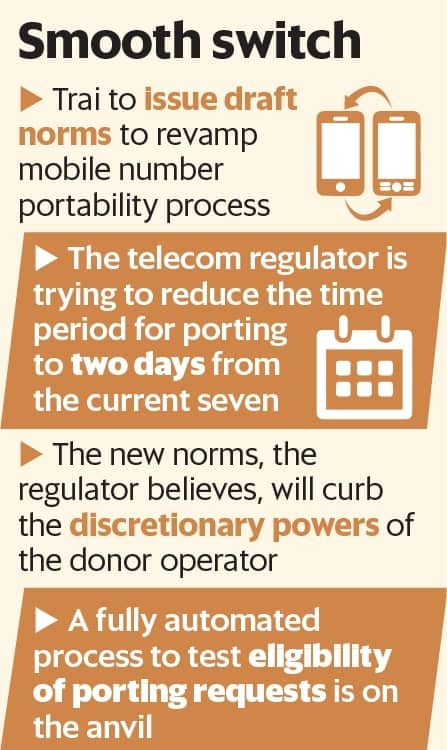 “The draft rules are ready and we will publish them soon to invite public comment. Basically, the new norms aim to reduce the time (to port) and the discretion of the donor operator," the official said, requesting anonymity.

This, the regulator believes, will ensure a hassle-free experience for consumers who wish to port from one network to another.

Under current norms, a subscriber must stay with one operator for at least 90 days before switching to another. The maximum period for porting currently is seven working days, except in Jammu and Kashmir, Assam and the North-East, where it is 15 working days.

“We want to bring this (porting period) down to two days," the official cited above said.

Several small telcos including Reliance Communications and Aircel have recently shut operations, posing problems for many subscribers. The Trai consultation paper floated on 6 April said that after discontinuation of wireless access services by some operators in some or all telecom circles, the regulator had received many complaints related to porting.

There are also cases of errors made by the subscriber while communicating the code, or by the person at the point of sale, entering the wrong code while submitting the porting request.

“Right now, the donor operator which issues the porting code knows that the subscriber is porting out and uses all tricks in the bag to create harassment for users," the official said.

The regulator aims to entirely automate this process to ensure a smooth porting experience for users.

“There will be a 6-7 point checklist, which will seek answers to questions on eligibility criteria for a user to port out. This will have to be answered in an automated yes-or-no manner and only then can the unique porting code be generated," the official said.

The draft norms, once issued, would be open for public comment for at least four weeks.