New Delhi: Sales of passenger vehicles in May grew 6.26% from a year earlier for the 11th straight month, although the pace of growth has slowed.

Passenger vehicles, which include cars, utility vehicles and vans, rose to 231,640 units in May, according to data compiled by the Society of Indian Automobile Manufacturers, or Siam.

The May sales once again highlighted India’s growing fondness for utility vehicles with Siam claiming that the popularity for SUVs is affecting car sales, which have declined for the fourth time in five months. Utility vehicle sales grew 36% in May to 58,793 units, while car sales declined 0.86% to 158,996 units.

Owning an SUV, especially in smaller towns and cities, is considered to be a sign of affluence. The other benefit of owning such vehicles include their ability to better manoeuvre India’s dusty and pot-holed roads.

The Supreme Court has barred the sale of diesel vehicles with an engine size of 2,000cc or above in Delhi and its suburbs in an effort to reduce pollution. 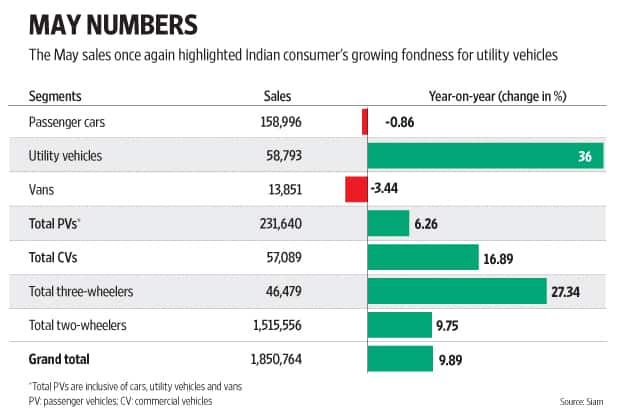 A similar ban was also announced in Kerala by the National Green Tribunal, but the state high court has stayed the order. Nevertheless, many are hopeful that the government and judiciary will find a solution to the issue soon.

Siam expects that a good monsoon will revive consumer demand in rural India and boost the sales of passenger vehicles.

“If harvests are good, we will be right on track. But we can only wait and hope for it to come good," Mathur said.

He added that demand is still driven by urban consumers and demand for motorcycles and entry-level passenger cars in rural areas has declined.

Mint reported on 6 June that a favourable monsoon alongside government pay hikes can herald a consumption-led rally in the economy that, in turn, can boost the profitability of Indian companies.

On Wednesday, the official weather forecaster declared the onset of the rainy season, saying the June-September south-west monsoon has hit Kerala, cheering farmers and the economy after two years of deficit rains.

It marked the beginning of the monsoon season which, according to the India Meteorological Department, will bring above-normal rainfall this year at 106% of the long-period average.

After two years of failed monsoon, a good monsoon is set to cheer not only farmers and policymakers over the prospects of a revival of rural consumption, but also the wider economy.

Majeed of PwC said that the auto industry’s outlook for this fiscal year is much better compared to last year.