Home / Industry / Banking /  One year after demonetisation, cash is still king
Back
Share Via

One year after demonetisation, cash is still king

Cash scarcity led to a spike in digital payments post demonetisation, but the trend reversed as remonetisation picked up pace

New Delhi: Soon after demonetisation was announced on 8 November last year, it was projected as part of a broader push towards a cashless economy. Several ministers and government officials claimed that this would nudge Indians to rely on non-cash or digital payments.

In the weeks and months following demonetisation, digital payments (including mobile wallets and mobile banking, credit/debit card transactions, and UPI, or Unified Payments Interface) saw a sharp spike, even as withdrawals from ATMs (automated teller machines) declined. But much of this seems to have been driven purely because of cash shortage. As remonetisation picked up pace this year, digital payments fell even as ATM withdrawals rose. The ratio of digital payments to narrow money (which include the most liquid bank deposits available on demand, apart from currency) has fallen back to pre-demonetisation levels even as the ratio of ATM withdrawals to narrow money has almost reached pre-demonetisation levels. Chart 1 shows the normalized levels of these ratios. The latest available data is as of August 2017. To compare with the past trends, and to check the impact of demonetisation, we have considered the August 2013-16 values and the values in each month since then. As the chart shows, there is very little evidence to suggest any behavioural change because of demonetisation. The spike in digital payments and the decline in ATM withdrawals were both caused by artificial constraints, and do not seem to have had a lasting impact on Indian citizens.

Other kinds of electronic payments, such as NEFT/IMPS (National Electronic Fund Transfer/Immediate Payment Service) did not register much change in the post-demonetisation period, as chart 2 shows.

What about infrastructure for digital payments? The year-on-year growth in the number of point of sale (PoS) terminals (till August 2017) shows a sharp increase compared to the previous years as does the number of credit cards in the country (see chart 3). 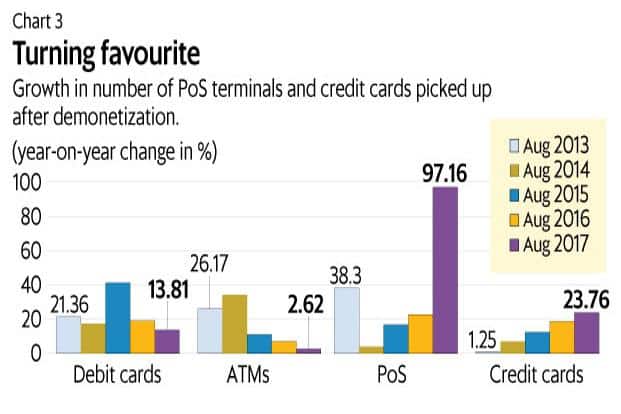 But that does not mean that technological or policy changes are doomed to fail. The use of mobile payments in Kenya is a case in point, showing how technological change and the right policy moves can lead to a faster adoption of cashless payments, and boost financial inclusion efforts. The density of ATMs also seems to play a role in driving cashless payments —when ATMs are easy to reach, the tendency to withdraw large volumes of cash tends to be lower, research shows. It is worth noting that growth in the number of ATMs over the past year has been muted in India, and this perhaps has slowed the transition to a cashless economy.

Economies that have reduced the use of cash have all adopted one of these methods: reliance on economic growth, or a boost to digital infrastructure (along with technological innovations). No country on earth has had to demonetize 86% of its currency in circulation to boost digital payments as India did last year. Little wonder then that India’s grand experiment did not lead to a big sustained shift towards non-cash payments.

This is the second of a two-part data series on demonetisation. The first part examined the overall impact on the economy.