Demonetisation takes a toll on automobile sales in December

Sales at top three auto makersMaruti, Hyundai and Mahindradecline, while smaller rivals such as Toyota and Renault buck the trend

Mumbai: Passenger vehicles sales at India’s top three automakers slipped in December despite an aggressive sales push to beat the year-end sluggishness and the impact of demonetisation of high-value banknotes. However, firms with a relatively smaller base and new models in their line-up saw sales advance at a brisk pace over the year-ago period, showed monthly sales data released by auto firms on Monday.

Two-wheeler firms could not overcome the impact of demonetisation and most companies, particularly those with higher rural sales, saw steep declines in numbers.

Passenger vehicle sales at Mahindra and Mahindra Ltd, market leader in utility vehicles (UV), dropped 8% to 18,197 units over the year-ago period. Pravin Shah, president and chief executive, automotive sector at the firm attributed the lower sales to the “short-term effects of demonetisation as well as reduced and postponed purchase decisions".

But the fall in Mahindra’s volumes was less than what analysts expected.

Sales at Maruti Suzuki India Ltd and Hyundai Motor India Ltd fell 4% each during the month, the companies said. 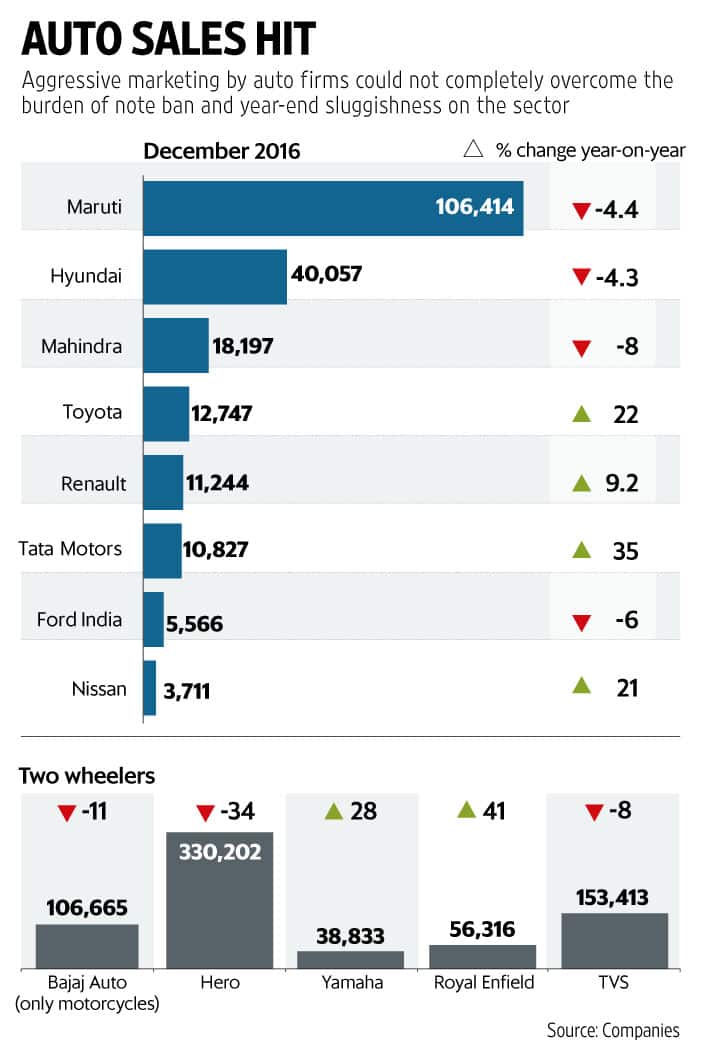 Typically, December is a slow month for car sales as buyers tend to postpone purchases to the new year. For the same reason, companies tend to lure buyers with attractive discounts and offers.

This time around, with demonetisation prompting buyers to curtail purchases of discretionary items like automobiles, carmakers had to go the extra mile to attract buyers into showrooms. Besides discounts, most of them offered zero down payment schemes.

Such schemes, however, only partially helped to drum up volumes, said a Maruti dealer who spoke on condition of anonymity.

In a research note on 28 December, analysts Kapil Singh and Siddharth Bera of Nomura International, wrote that they expected December sales (dispatches to dealers) to be impacted by a sharp decline in retail sales due to demonetisation, and inventory de-stocking by companies to clear off 2016 inventory.

“Our channel checks indicate that rural retail has been impacted more (double-digit decline) compared with the urban segment, due to the liquidity crunch. They expect sales to pick up only by February-March 2017, when the cash availability improves. We expect strong double-digit growth by H2FY18F, off the low base," said Singh and Bera.

After hitting a multi-year high in September, passenger vehicles sales advanced at a tepid 1.82% in November, the slowest since February 2016, industry body Society of Indian Automobile Manufacturers (Siam) said on 9 December.

Faced with the impact of demonetisation, two-wheeler market leader Hero MotoCorp Ltd’s December sales skidded 34% to 330,202 units from a year earlier. The firm’s manufacturing facilities at Gurgaon, Neemrana and Haridwar were closed between 26-31 December for annual maintenance, it said.

S. Ravikumar, president-assurance and business development at Bajaj Auto, said the two-wheeler industry contracted 25% in December compared with last year, the steepest in many years. The impact, he added, was more pronounced in rural pockets.

The Asian Development Bank (ADB) on 16 December reduced India’s growth forecast for the current fiscal to 7%, from 7.4% estimated earlier, on account of the effect of demonetisation.