Yogurt: the new challenge for Pepsi

Despite coming late to the party, PepsiCo senses an opportunity in a fast-selling category across grocery stores

Yogurt is one of the fastest selling categories in grocery stores, and PepsiCo sees plenty of room for growth even though it has come late to the party. “Dairy has become everybody’s favourite avenue when it comes to escaping the miseries of obesity," said Bevmark Consulting chief executive officer Tom Pirko. “Everybody’s trying to figure out a health angle."

To boost its chances of success, PepsiCo has partnered with Germany’s Theo Muller Group, a stalwart of the European dairy industry, repeating a strategy that has already made the snack-and-soda firm a leading US purveyor of hummus and other healthy dips.

Earlier this month, the Muller Quaker Dairy joint venture opened a yogurt plant in upstate New York. By combining Muller’s expertise with its own marketing and distribution muscle, PepsiCo aims to build a loyal US following.

But that won’t be easy even with PepsiCo’s size, Muller’s reputation and growing demand for nutritious food, said industry experts. Consumers are demanding, and pricing is hyper-competitive.

Traditional yogurts from General Mills Inc.’s Yoplait and Danone’s Dannon often use eye-popping discounts. Even Chobani, the darling of the Greek yogurt craze, has been running promotions more often. The competition was so fierce that Kraft Foods pulled its Athenos line of Greek yogurt in 2012, only two years after its launch. 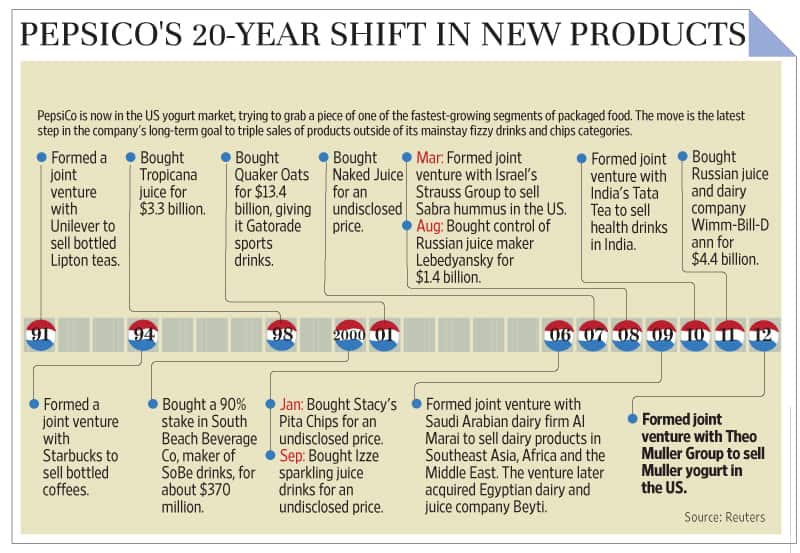 “Quite frankly it’s going to depend on how much marketing they put behind this big roll-out," Herzog said.

But PepsiCo chief executive Indra Nooyi says the company need not go overboard in its spending to make the brand a success. The company’s investment in the 50-50 joint venture will not “break the bank" and the yogurt is innovative enough to sell at a premium price, she said. There are no plans to fund aggressive promotions to spur sales temporarily.

“Fortunately or unfortunately, money alone does not do it," Nooyi said after a tour of the new yogurt factory in Batavia, New York.

The US market for yogurt is worth $7 billion, according to Euromonitor International, having grown at an average rate of 8.5% during the last five years.

Americans still eat far less yogurt than Europeans, so there is room for growth. Yet Euromonitor, a sales tracking firm, forecasts a slower 5.9% average rate of growth for the next five years—still double the expected growth of packaged food overall.

Even though Greek-style yogurt now makes up more than 40% of the market, the top-selling brand remains Yoplait, which has a nearly 24% share, according to Euromonitor.

It says Chobani is second, though France’s Danone has a greater overall share between its Dannon, Activia, Stonyfield Farm and Danimals brands, which together account for 30% of the market.

With the average supermarket stocking up to 200 different yogurt products, Dannon spokesman Michael Neuwirth said the dairy company wants to offer a range of types that can be eaten as meals, snacks and desserts.

Dannon and Yoplait have been working hard to satisfy America’s newfound love of Greek yogurt. There is Yoplait Greek, Dannon Oikos Greek and Greek-style versions of Activia and Light & Fit. Dannon is also rolling out savoury Oikos Greek yogurt dips in flavours like French onion and cucumber dill.

Their non-Greek offerings often compete on price, with recent supermarket promotions touting 20 Yoplait cups or six Dannon Light & Fit 4-packs for $10 each. The more premium brands Chobani, Muller and Fage, are sometimes sold at $10 for 10 on promotion, while data released in May showed that the amount of Chobani yogurt sold on promotion was nearly twice as much as a year earlier, according to Bernstein Research.

Such intense competition doesn’t deter Nooyi, who sees moving into healthier products as a necessary way to stay up front as consumer preferences change and junk food falls out of favour.

In 2012, PepsiCo derived 51% of its $65.49 billion in revenue from foods such as Tostitos and Doritos and 49% from drinks such as Gatorade and Mountain Dew.

Roughly 20%, or $13 billion, came from products that are healthier than the traditional sodas and chips, such as Tropicana juice, Quaker Oatmeal and Aquafina water.

For yogurt, PepsiCo is using the same strategy it used for Sabra hummus, when it teamed up with Israel’s Strauss Group. Sabra has become a leading brand in just a few years.

The key is “doing it in a differentiated way and doing it with a partner who has skin in the game", said Nooyi, who grew up in India eating home-made yogurt daily. “That’s really what we’re focused on."

PepsiCo would not give sales forecasts or say how much it was spending, but the two companies spent $206 million on the factory in Batavia. Until its opening earlier this month, the yogurt had been produced in Europe and available only in limited US markets. It is now going nationwide.

So far, Muller yogurt is meeting or beating internal milestones, and gaining space on shelves across the country, PepsiCo said.

But if the venture cannot stir up adequate profits in the future, Nooyi said PepsiCo always has an out.

“If we believe this thing cannot make good profit for us downstream, we will tell the partner to take it over," she said. Reuters