Mumbai: Loans restructured by banks in the last couple of years have come back to haunt them in the form of rising non- performing assets (NPAs), even though bankers and analysts continue to expect asset quality to improve steadily as economic growth revives.

Data has been taken since 2010 because that was the year the last two public sector banks —United Bank of India (UBI) and Punjab & Sind Bank—were listed. 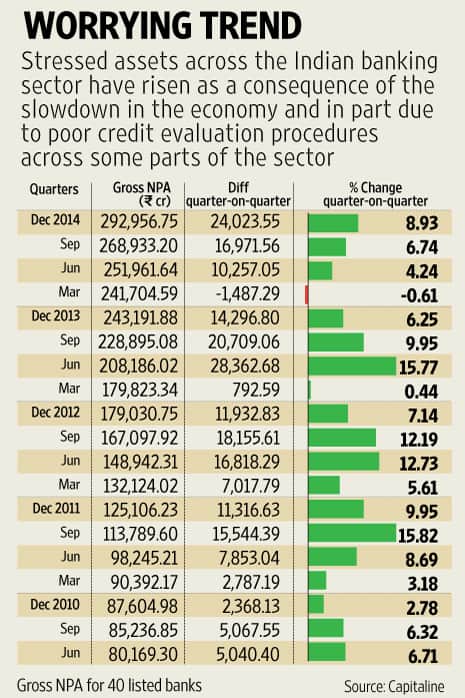 To be sure, gross NPAs as a percentage of the overall loan portfolio, which is a clearer indication of the asset quality across individual banks, vary.

“These are problem assets which were restructured. But I do not see this problem prolonging because of the positive economic tailwinds. Also companies are not leveraging at the level seen previously but are finding ways to cut debt."

Bhoumik said on an average 20% to 25% of restructured loans had turned into NPAs and he expects the same trend to continue.

Stressed assets across the Indian banking sector have risen as a consequence of the slowdown in the economy and in part due to poor credit evaluation procedures across some parts of the sector.

According to the latest data from the Reserve Bank of India (RBI), overall stressed assets, including restructured assets and bad loans, have gone up to 10.7% as of the end of September 2014 compared to 10% in March 2014.

According to some analysts, banks are also trying to clean up their books in anticipation of a pickup in lending opportunities in the months and years ahead as the government prepares to unveil its budget for the next fiscal on 28 February.

“This will be the first full budget of the government and banks are trying to clean their books to take whatever opportunity that comes their way. This is also a good time to show bad loans because the market is buoyant and despite the rise in bad loans, bank stocks are doing well," said Purvesh Shelatkar, head of research at BoB Capital Markets Ltd.

The latest rise in NPAs has made bankers cautious in predicting a recovery in the sector.

After announcing the bank’s earnings on Friday, State Bank of India’s chairperson Arundhati Bhattacharya, said that it may take another two to three quarters before the pain of NPAs subsides.

Bank of India chairperson V. R. Iyer said that the third quarter had been challenging and the bank doesn’t expect the situation to improve significantly in the next two quarters as well.

“We expect this trend of restructured loans slipping into NPAs to continue at least for the next couple of quarters. The positive impact of the improvement in sentiment will only be seen after a lag, after the steps taken by the government to revive the GDP (gross domestic product) growth results in improving cash flows for companies," she said in a post results conference call with journalists on 30 January.

According to Rajiv Pathak, banking analyst at Dolat Capital Markets Ltd, the rise in NPAs is not alarming because these loans were always part of the “stressed loans" group.

“These loans were restructured in the last one or two years (and) have slipped because the assumed recovery in these loans has not happened. The addition of fresh NPAs is relatively lower," Pathak said.

Both Pathak and Shelatkar expect banks to push for restructuring in the current quarter before the 1 April deadline.

“India has not seen such an elongated slowdown in GDP growth for many years and hence it will take some time before the additions to delinquent assets slows down to a sustainable level," Pathak said.