The lifecycle and cost of a banknote

What is the average age of Indian currency? How often are our notes retired, and what is the cost of printing?

What is the average age of Indian currency? How often are our notes retired, and what is the cost of printing? The cost of printing a currency note, based on the central bank’s reply to a Right To Information query, and the growth in overall money supply, was provided in a Mint report on 10 April. While that gives us the unit cost of printing a note, what would be interesting is to determine the total cost of maintaining India’s currency.

Globally, there’s a trend of moving away from cash-based transactions. In Kenya, for example, mobile payments account for transactions amounting to at least 25% of that country’s gross domestic product (GDP) as of 2013. In the US, credit cards have been prevalent for decades now, even for small payments. Even in India, the use of credit and debit cards, and electronic payments (by means of National Electronic Funds Transfer, or NEFT, or Real Time Gross Settlement, or RTGS, system) are on the rise. In his budget speech earlier this year, finance minister Arun Jaitley called for a move away from cash-based transactions.

The issue with moving away from cash transactions is that alternate platforms (such as credit or debit cards, or mobile payments) require a technological platform that imposes transaction costs, which are typically borne by a buyer. Using a credit card, for example, results in interchange fees charged by the credit card companies from the seller. Bank payments (NEFT/RTGS) are free in that they don’t necessarily impose a monetary transaction charge (depends upon the bank), but the cumbersome process makes them unviable for small payments. With the finance ministry backing easier cashless payments, it is possible that we will have an easier to use, but still secure, technological platform for payments, but that needs to be funded, and that funding might be in terms of an interchange fees.

The specialty with cash is that neither the buyer nor the seller incurs a direct cost of handling cash, apart from possibly the risk of theft, which tends to get discounted since it is a rare event. There is a chance of damage or mutilation, of course, but in such cases it is easy to exchange the said mutilated currency at a bank. This, however, doesn’t mean that the use of cash does not incur a cost—for there is significant cost to printing, maintaining and securing currency, which is currently borne by RBI. In other words, RBI and the banking system effectively subsidize the use of cash as a platform for users, which is pretty much everyone. 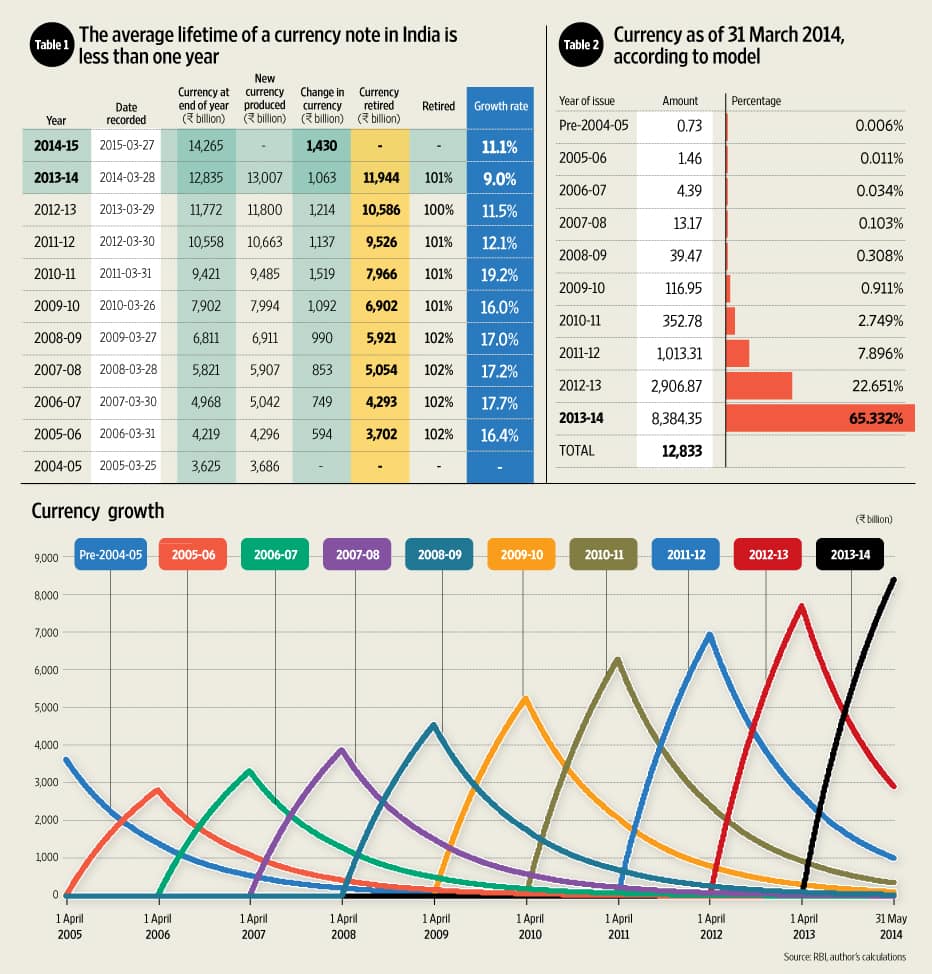 How do we then explain the presence of the Y.V. Reddy note in my wallet? While the average age of a currency note is a little less than a year, it doesn’t prevent a note from surviving for much longer than that. For example, consider the following case. RBI prints a fresh bundle of notes and issues it to a bank, which issues it to a customer when she withdraws it from an automated teller machine. Having withdrawn the money, the customer proceeds to put the money in her cupboard, not to take it out for another decade. On the other hand, another note may changes hands so frequently that it is soon soiled and goes out of circulation.

We will also need to make assumptions on the pattern of retirement and printing notes. Here we will simply assume that printing and retirement are both constant though the year. For example, in 2013-14, ₹ 13 trillion of new currency was printed and ₹ 11.9 trillion of currency was retired. We will assume that on each day of this financial year, ₹ 35.6 billion of new currency (13 trillion/365) was printed and ₹ 32.7 billion of currency (11.9/365) was retired. This is not mathematically correct (a geometrical growth and retirement rate is more correct, but outside the scope of this piece), but suffices to give us a good mathematical model.

Running this model from 2005, the distribution of currency printed in different years as of the end of 2013-14 is given by table 2.

In other words, going by the model, about 65% of the currency in circulation as of the end of March 2014 had been issued in the year 2013-14 itself, and about 23% in the preceding year. As of 31 March, 2014, approximately 0.16% of all currency would have been issued in the Y.V. Reddy or earlier (notice that the model has several assumptions, so this is very approximate).

It is also interesting to note the growth of currency issued in a particular financial year. Again this is a function of our model, but useful nevertheless.

In January 2014, RBI issued a notification that all notes issued prior to the “2005 series" would be phased out. The deadline for such phasing out was initially set at 1 July 2014, and then subsequently extended (in two steps) to 30 June, 2015. From that perspective, it is interesting to see the how much of pre-2005 currency is still in circulation. According to our simplistic model, the figure is about ₹ 730 million, which is not particularly large. Again, it must be pointed out here that the model we have used here is fairly simplistic and hence the number could potentially be larger (or smaller).

Finally, what does it cost RBI to print India’s currency? Going by the costs mentioned by RBI in response to a Right To Information query in 2012, and assuming that such costs have been constant over time, RBI spent approximately ₹ 11,300 crore in printing notes in 2013-14.

This amounts to about 0.9% of the total currency in circulation at the end of 2013-14 ( ₹ 12.8 trillion). We should, however, note that each note is used in multiple transactions, so this cost is likely to be an order of magnitude lower. On the other hand, the above figure only represents the cost of actually printing the currency. Costs of transport, distribution, security, etc., are additional, and can be fairly substantial (quantifying that would be an interesting exercise, but out of scope of this piece).

In other words, it is likely that the cost of the rupee as a transaction platform, as is currently borne by RBI and the banking system, is rather high, and a case can be made for subsidizing technological platforms necessary for moving to a low-cash economy.