Reduced tech spending by banks, automation and competition from mid-sized IT firms may impact the Big Four

Tre global banks and insurance companies, which contribute 25-40% of the revenue at top technology companies, outsourcing less work to India? This was put to test earlier this year after Nasdaq-listed Cognizant Technology Solutions Corp. warned of weak revenue growth of between 10% and 14% in US dollar terms for 2016 (as against a 21% increase in 2015), primarily on account of the big banks holding back on new technology spending. 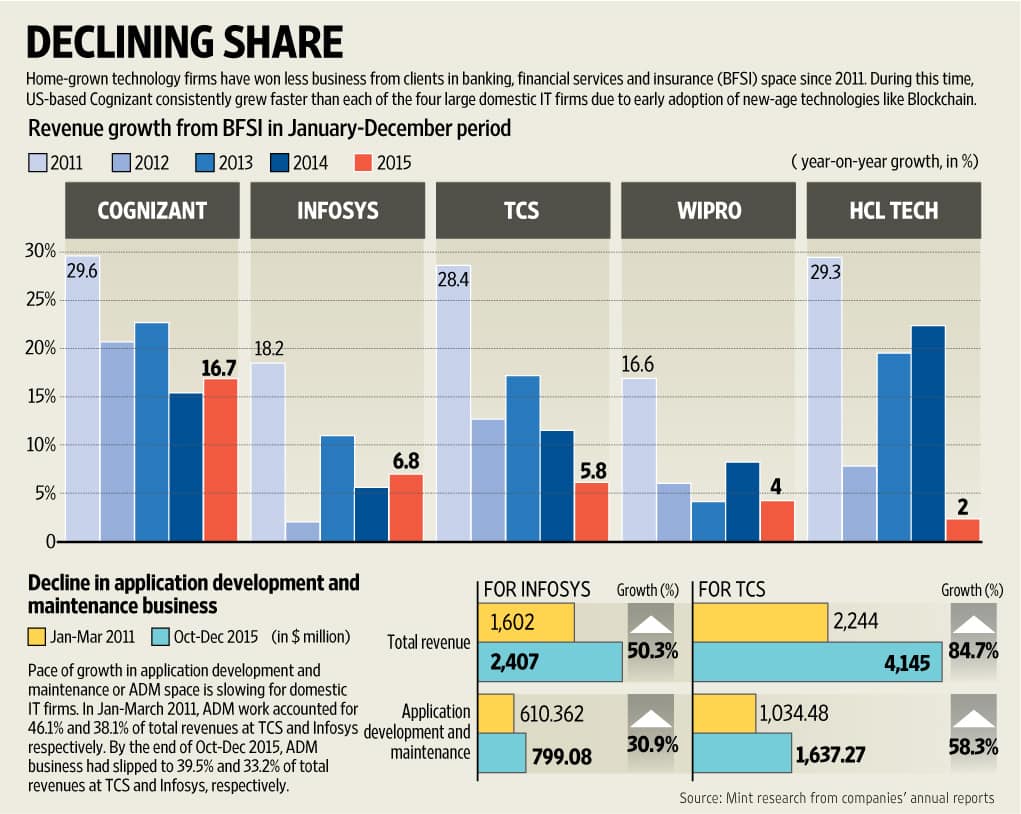 During this time, Cognizant consistently grew faster than each of the four large domestic IT firms, even as TCS and HCL Technologies Ltd reported the slowest growth in the BFSI space in 2015.

Heavy outsourcing work from big banks, such as Citigroup Inc. and Bank of America Merrill Lynch are mainstay of IT firms. BFSI accounts for over 40% of revenues for both TCS and Cognizant, while it brings 33.5% of total business for Infosys Ltd and constitutes 26.2% and 26.6% of total revenue at Wipro Ltd and HCL Technologies, respectively.

What does this diverging commentary from US-based Cognizant and homegrown IT companies mean?

Cognizant’s soft forecast is partially on account of some client-specific issues, as the firm has lost some business from large global banks. It has lost business from UK banking giant Lloyds Banking Group Plc, according to two executives familiar with the development, and has seen a decline in revenues from the Swiss bank UBS Group AG, according to another executive in know of the matter.

Mint could not independently quantify the loss for Cognizant from these two clients.

However, most experts believe a few client-specific challenges should not be of much concern because Cognizant has recorded a compounded annual growth rate (CAGR) of 14.71%—much higher than its Indian rivals—over the last five years from clients in the BFSI space.

“Cognizant’s share of incremental business is far higher than other companies. In each of the last five years, Cognizant’s BFSI has grown at over 15%. So, any soft growth is coming from a higher base," said a Mumbai-based head of research at a domestic brokerage.

“Indian firms can say business in BFSI is normal, but the fact is their growth has been a third of what Cognizant has recorded last year," this person said on condition of anonymity.

Cognizant’s strong performance in BFSI is on account of its robust consultancy practice and its ability to embrace new-age technologies like Blockchain, an electronic system on which crypto-currencies like Bitcoin work.

Globally, financial firms, from banks to stock exchanges, are exploring Blockchain to cut settlement times and bring down costs tied to international payments. A case in point: even as domestic IT firms, such as TCS and Infosys,have boosted investments in this space, Cognizant has started winning deals by offering Blockchain-based solutions to clients. Last month, Cognizant announced that it entered into a partnership to develop Blockchain solutions for secure record-keeping of documents for Japan’s Mizuho Financial Group Inc.

So what explains the underperformance in the BFSI space for domestic technology giants? Declining technology spending, mainly in application development work, from big banks even as large technology vendors see rising competition from mid-tier firms, driving down prices, and rising automation cannibalizing the existing model of billing clients on human hours are three primary reasons.

“After years of offshore services adoption, an issue today is that some large banks are tapping out on how much more application work can be sent to Indian firms. So, Indian firms are naturally diversifying into other services lines, such as BPO (business process outsourcing) and infrastructure outsourcing, in order to find additional avenues for growth," said Rod Bourgeois, founder of US-based DeepDive Equity Research.

“Overall, there’s still growth to be reaped, but the prospects for Indian firms to grow at banks are wrestling with demand maturation and heavier competition."

Among domestic software services firms, TCS’s CAGR growth in BFSI segment at 9.15% since 2011 was the highest among the Big Three technology firms. Yet, TCS’s growth in BFSI space in the January-December period last year was 5.8%—the slowest since Chandrasekaran took over as chief executive in 2009.

“There is an oversupply of services, coupled with the declining demand. Simply put, BFSI segment’s demand for IT/BPO services is slowing, and there is an oversupply of competitors vying for the business, driving down prices, profit margins and revenue growth," said Phil Fersht, CEO of US-based HfS Research, an outsourcing-research firm.

Fersht also said that disruptive competitiveness brought by nimble, mid-sized service providers like EXL Service Holdings Inc. and Genpact Ltd is helping them win contract from large banks. This is further eating into the business of large technology giants.