Indian IT firms in no mood to hire

Forget creating jobs, many companies in the sector are choosing to not even fill the vacancies left behind by the people who have moved on.

The reasons are simple: slow revenue growth and adoption of newer technologies, such as cloud computing and automation platforms, that have started replacing engineers.

The trend could help IT firms reduce their wage bill but boost the training costs of existing employees. It will also hurt the future prospects of the hundreds of thousands of engineers India produces every year.

India’s third-largest software firm Wipro saw the net addition of 2,248 employees in the March quarter to take its workforce to 172,912 employees from 170,664 at end of the December quarter. Significantly, during the fourth quarter, 2,800 employees joined Wipro from the two firms it bought, namely HealthPlan Services and Cellent AG. This means that Wipro saw 552 more employees leave the firm than in the third quarter of last year. 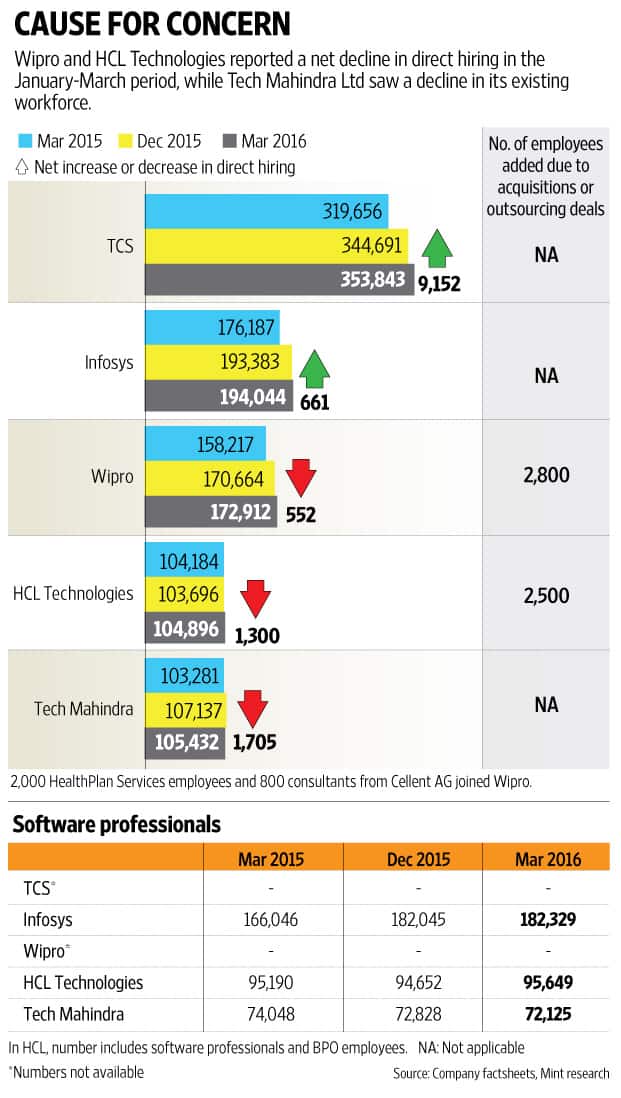 Prithvi Shergill, chief human resources officer at HCL, declined to confirm the numbers, but said that “automation certainly is changing the dynamics in the workforce".

Like its peers, HCL is focusing on high-value and complex work that calls for specialized digital capabilities.

“As IT companies are adopting newer technologies, they require employees that are skilled and have the required mindset, adaptability and resilience to learn and gain experience in new domain areas," Shergill said.

He expects the next-generation integrated operating models to be very different from the traditional outsourcing services models.

“Primarily at Tech Mahindra, our focus has been on automation driven by our AQT (automation, quality, time) framework. Additionally, our steady transition from legacy work to more of digital solutions might have had an impact on the number of employees," a Tech Mahindra spokesman said, adding that an additional factor could be the fact that attrition generally spikes in the fourth quarter.

Experts are not surprised with the end of mass hiring by IT firms.

“Smaller numbers of candidates will be sought at the lower end of the skill spectrum and the providers will seek ways to address a certain amount of normal attrition through augmenting productivity incrementally through automation, allowing for a sustainable pace of delivery transformation," said Huber.

Industry leader Tata Consultancy Services Ltd (TCS) and Infosys Ltd bucked the trend, and added employees in the last quarter, although many believe that these firms too will soon see the impact of automation and cloud computing.

For now, superior growth and better profitability than their smaller rivals seem to have helped TCS and Infosys take more chances with hiring.

TCS posted 7.1% dollar revenue growth while Infosys posted 9.1% growth in the last year. While TCS’s revenue growth almost halved from the prior year, its profitability is an industry-leading 26.5%. Infosys has an operating margin of 25%.

This puts these companies in a relatively better position that their three peers, who all have profitability of less than 20%. Wipro recorded 3.7% dollar revenue growth, while HCL and Tech Mahindra posted 7.1% and 9.5% growth last year.

“Any of the IT providers may undertake hiring in response to specific needs, especially if they have recently won a number of new or expanded deals and require specific skill sets. I suspect that this is the case with TCS," said Huber.

It is not just automation that is changing the landscape of the industry. The rise of cloud computing is also a big factor, according to experts.

The rise of cloud computing is making clients of IT firms reduce their dependence on engineers. This is because a bulk of applications are moving to servers hosted by firms such as Amazon and Microsoft Corp., leaving some engineers at IT firms only overseeing maintenance work.

That is not good news for India’s technology outsourcing sector, which is estimated by industry lobby Nasscom to be directly employing 3.5 million people. Together, five of the largest technology firms in the country employed 931,127 people and generated $43.7 billion in revenue at the end of March 2016.

“If I were Prime Minister Narendra Modi, I would be very concerned that a whole workforce generation needs reorienting to address work activities that are growing in demand, as we are fast approaching a time of labour oversupply for the demand coming from US and Europe," said Phil Fersht, CEO of US-based HfS Research, an outsourcing-research firm. “The future is more about the type of jobs we need to create, not the ones we could protect."

The result will be a rise in training costs.

“Training costs for all IT firms are going up because they are re-skilling their existing workforce. Earlier, an employee could have lived easy if one just had knowledge of, say, Java. But now everyone is expected to have expertise in more technical languages," said Nandita Gurjar, former HR head of Infosys Ltd and currently a mentor for start-ups.